This article was selected as the winner of the 2017 DC Student Arts Journalism Challenge, an annual competition designed to identify and support talented young arts writers.

Although the American University Museum at the Katzen Arts Center always seems to have thought-provoking and passionate pieces relating to the contemporary cultural climate, there occasionally comes an exhibit that stops you in your tracks, whether from the sheer ingenuity behind it or the thoughtfulness. “Updraft America”, on exhibit at the Katzen Arts Center from September 6-October 23, 2016, is one of those exhibits. Washington D.C. sculptor and former Senate aide Suzanne Brennan Firstenberg’s frustration with our political climate led her to create Updraft America, an exhibit that uses 10,718 paper airplanes made out of a year of the Congressional Record. There is a clear emphasis on bipartisanship in the the piece — red and blue airplanes congregate together in the middle for a lovely shade of purple, the symbol of unity in politics.

It is important to mention that though the exhibit of “Updraft America” discusses the importance of intersectional discussion, the movement of Updraft America aims to promote a message of unity in the face of political adversity. It emphasizes that your political affiliation does not matter — what matters is a shared exhaustion over gridlock and the need for our political system to unite for a better nation. Each and every voice matters, which is why you can make your own paper airplane when you visit the exhibit.

Firstenberg’s life has been a series of diverse and challenging experiences, but her job as a Senate aide on Capitol Hill was a turning point. “In the summer of 2015, I was working at my Adams Morgan sculpting studio when I heard a news report of yet another threatened government shutdown,” Firstenberg said about her inspiration behind Updraft America. “That was the day I decided to use art to address political gridlock because words no longer seemed to make a difference.”

Soon after, she came up with the idea of folding each page of a year’s subscription to the Congressional Record into paper airplanes. Firstenberg began to reach out to friends, colleagues, anyone who felt similarly about the lack of union within our political system. “People are angry and frustrated,” she said. “This project takes that frustration and transforms it into something positive, something hopeful.” She set a goal of folding thirty airplanes a day to get to the current 10,718, and started to fold everywhere: doctors’ waiting rooms, stoplights, even airplanes. As her project expanded, more people of all backgrounds started to reach out to her, their frustration echoing her own. Firstenberg began to foster a sense of community among the paper airplane folders, creating a website to encourage others to fold their own paper airplanes. “I formed a bipartisan team. We met with former members of Congress to better understand how people could make the greatest impact,” she said on the inclusion of allowing people to make their own airplanes to further bi-partisanship. “The members told us that people must reach out to the candidates to say that they will only vote for those willing to work across the aisle.”

As the project gained more traction, reaction was universally positive. People were eager to fold their own paper airplane in the name of bipartisanship. However, the movement of Updraft America had a few naysayers whose cynicism was broadcast in the mantra of “this will never work.” To those criticisms, Firstenberg had an answer: “My response to naysayers is that cynicism is a vote for the status quo. Everyone eligible to vote holds responsibility for fixing our political system and possesses the opportunity to create positive change.”

Even the name of Updraft America is incredibly significant to the exhibit; Firstenberg wanted the name to define the concepts behind the art. “Stall Recovery” was a preliminary name, as the definition of “regaining positive control by reducing the angle of attack” correlated well with the project. However, she realized that the name lacked a vital kind of positivity that the exhibit wanted to project. Thus, Updraft America was born, a name that could not only represent the exhibit, but the ongoing political movement.

Firstenberg wants to continue to expand the movement of Updraft America in the future, especially among college students and millennials. “Updraft America’s mission is to give voice and visibility to people who are reasonable in their political stances — people who can loosen their grip on their own ideologies just enough to listen to someone with a differing perspective.”

The “Updraft America” exhibit will be at Katzen until October 23, 2016. You can find more information on the exhibit and movement on their website, updraftamerica.org. 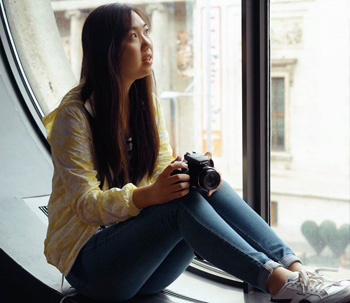 Anying Guo is a rising junior at American University, originally from the small town of Latrobe, Pennsylvania. She is a journalism major with minors in transcultural studies and business administration. She writes for The Rival American, where she holds the position of editor, and recently interned at Voice of America. In her spare time, she enjoys critiquing pop culture, visiting museums for hours at a time, and attempting to enact a feasible budget while living in D.C.

Originally published on amlitmag.com on October 15, 2016.