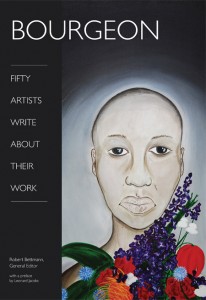 The Bourgeon book contains fifty articles by artists about their work, and compiles in one place some of the best articles from the magazine’s first five years. The artists whose essays are included in the book are a who’s who of contemporary art in the Washington, D.C. area:

The book’s designer was Design Action Collective, and Innosanto Nagaro. Leonard Jacobs, Director of the Cultural Institutions Unit at the New York Foundation for the Arts, former Managing Editor of Backstage, and co-founder of Theatermania.com, wrote the introduction for the book.

The first printing of the book was funded by a successful Kickstarter campaign, and with the support of the Humanities Council of Washington D.C.

“Bourgeon does more than take you on a tour of the arts landscape of the Washington, DC area. It takes you on a fascinating journey through the minds of dozens of artists and answers the question: what were they thinking? I highly recommend it for any arts library.”

“The first person accounts of creativity and process captures the zeitgeist and the lively pulse of an expanding arts scene.”

“The book is full of revelations about works of art, about how artists work, and about the cultural richness of Washington, DC. Kudos to Robert Bettmann for giving us the fifty-first work of art, this well conceived and edited book.”

Mike Panetta, Shadow Representative for the District of Columbia in the U.S. House of Representatives, and founder Beekeeper Group:

“With this anthology Robert Bettmann has put the world on notice that Washington makes things more beautiful than legislation. He shines a well-deserved spotlight on the Districts’s vibrant and energetic local arts scene with this well-curated collection. It shows a side of DC many people may not be familiar with, and is highly recommended.”

“Bourgeon is in a way a self-portrait by the fifty artists that have written about their art and it makes for fascinating reading for those of us not able to produce art by ourselves but rather now can live vicariously through the art of others. In some cases the articles are a window into the artist’s soul… The range of articles included in this book cover a large sphere of the art world from performance art to painting to poetry… Each article by an individual artist tells a story and some talk of what their art means to them and how they share that with the world.”

“A must have book to kindle artistic creative energy!”

“When it comes to supporting artists and arts writers, Robert Bettmann is a force of nature. Lucky the creators and annotators who meet his standards, and lucky the audiences and readers who can appreciate the results.”