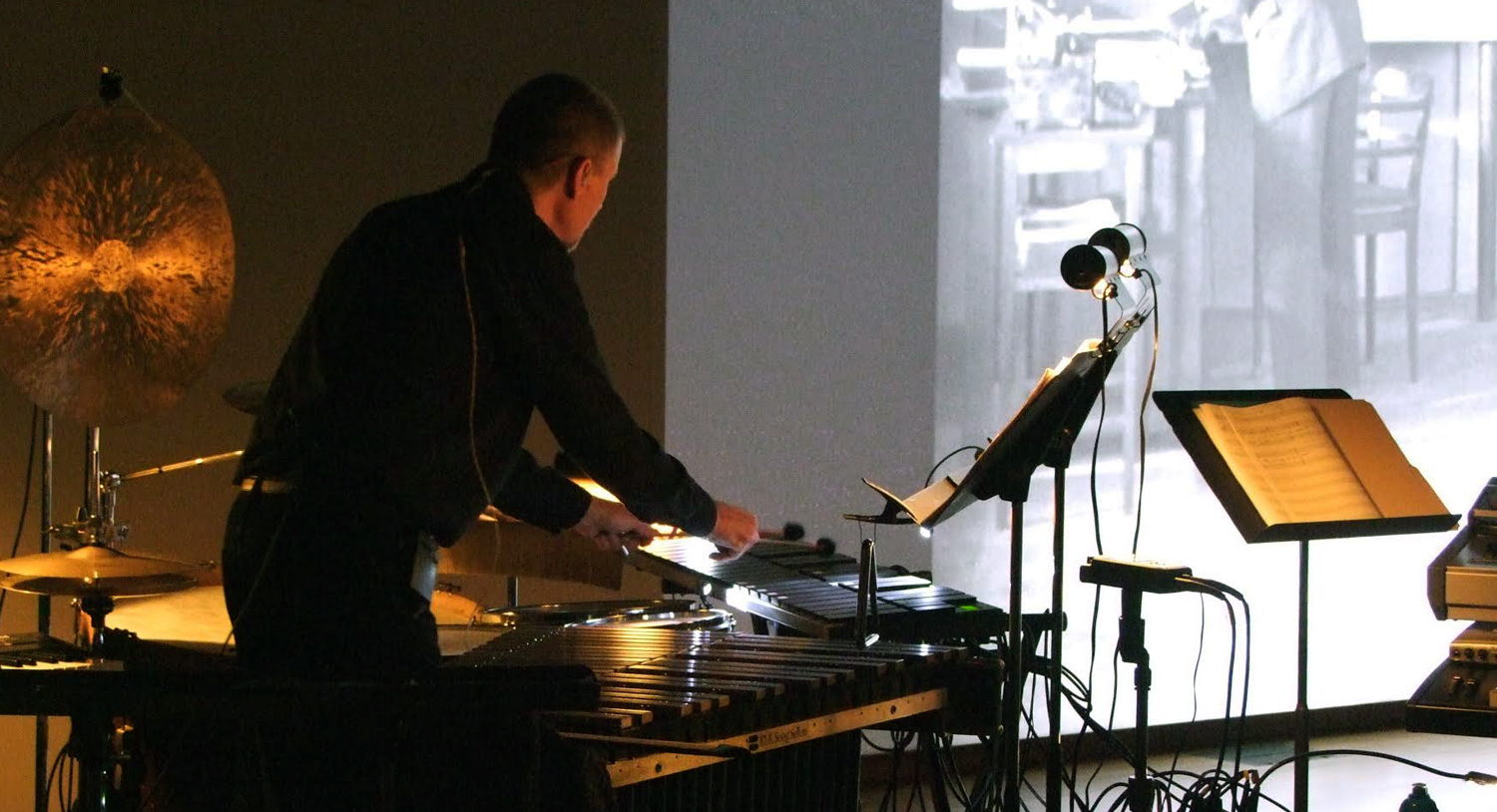 Most of the time when I’m making music I’m holding mallets or sticks.

My first instrument was my older brother John’s drum set. When I was about ten I started to listen and try to play to all the great Rock music of the late 60’s and ‘70s. Then early in high school I discovered marimba when our school bought one for the band program. I was in love! What a sound!

Late in high school I found jazz and more free forms of improvisation but I majored in classical percussion (at Catholic University here in D.C.) and through that studied and played the great composers – Stravinsky, Bartok, Cage, Crumb, ….. Bach! Playing good music is thrilling to me, whether it involves months of preparation to get every note correct, or when created on the spot.

I’m currently working on a piece including both composition and improvisation that will premiere in the Capital Fringe Festival on July 9, 2016. I‘ll perform live in the show to support a story written and performed by my good friend, David Kessler. The one-person play, called “One Mutual Happiness,” is directed by Jennifer Knight with technical assistance from Momo Nakamura and Joe Musumeci, and artwork by Adelaide Waldrop. Team Happiness!

I was drawn to this project by the opportunity to work with David. His son was a classmate of my daughter’s and we met at a parent’s meeting years ago and became fast friends. David is the author of several novels, and his play “Wombat Drool” was a hit at last year’s Capital Fringe festival. (“Wombat Drool” is a fictionalized account of his career as a biologist at the National Zoo.) For “One Mutual Happiness” David asked that I create music to help tell the story, but that would also be an integral part of the experience.

To begin the process I studied the script, listened to him read it, and then recorded him performing it. Once I had the recording I divided the script/recording into sections and subsection (scenes) to work on individually.

We both wanted marimba to play a major role but knew we were constrained by the fact that this is Fringe we’re talking about. There would be next to no time for set up at the performances and we may end up with a very cramped venue. I decided to use MainStage (an Apple performance program) and my MacBook Pro in the performance. I’ll use those tools to trigger recorded passages during the show and will also play sampled instruments from a small keyboard, and some live percussion instruments.

Although I won’t be playing my marimba in the show, marimba is still central to the score. The sound world I created for this includes marimba, vibraphone, glockenspiel, harp, ukulele, synth textures, cello and percussion.

The score has a recurring theme associated with David’s father that makes many appearances with variations. By altering the density, color and tempo, the same basic thematic material conveys optimism, sadness, pain or light-hearted fun. There are several moments of uplifting and surprising joy and I help portray them with Ukelele. Those are some of my favorite parts of the score.

The show includes flashbacks to wedding ceremonies, funerals, hospital visits and life events indoors and out. To help transport the audience to those particular environments I’ve added ambient sound recordings, and most I recorded myself.

As we developed this work through the winter and on into spring I got feedback from David and our wonderful director, Jennifer Knight. One challenge for me was adapting the score as the script changed and scenes expanded or contracted. A lot of time was spent editing recorded material to fit the new scene structures.

In all I trigger about 35 playback cues during the show. That density allows me to stay flexible, so I can flow with David from scene to scene. Each performance changes somewhat depending on the energy coming from the audience or how David improvises his lines. I’m constantly finding new things to play within the structure I’ve built. David and Jennifer have created some places where I interact with David during the show and hopefully I’ll be relaxed enough to make the audience feel our connection.

I’ve really enjoyed this entire experience and I’m excited as opening night approaches. Hope to see some of you in July! 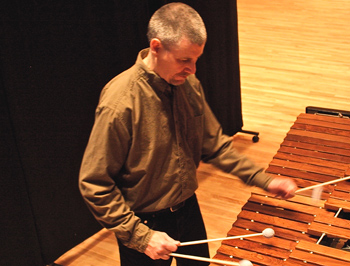 Rich O’Meara is best known for his compositions for marimba that are performed throughout the world. His work has been featured on the NPR program “New Sounds”, the PBS documentary “The Music Instinct, Science and Song” and can be heard on the Audite, Cybele, Animato, Codamusic, and Koch Discover International record labels. He gave a master class and concert of his works at the Eighth International Festival of Percussion in Patagonia, Argentina and has received four ASCAP Plus awards.

Since 1999 he has been a member of Silent Orchestra; a collaboration with composer/ keyboardist Carlos Garza to develop and perform new scores for classic silent films. Recent performances include the Smithsonian Museum, the National Gallery of Art, the National Museum of Women in the Arts, the Virginia Film Festival, the Savannah Film Festival and the Percussive Arts Society International Convention. Silent Orchestra scores for “Nosferatu” (1922) and “Salome” (1923) are available on DVD from Image Entertainment.

O’Meara has performed with Kwo’m Percussion, Sandbox Percussion, One Earth Percussion Theatre, the Contemporary Music Forum, the National Symphony, and as a soloist with the Kitchener-Waterloo Symphony. Along with the members of So Percussion and his son, Kevin O’Meara, he has played with the Dan Deacon Ensemble and appears on Dan’s albums “Bromst” and “America”. As an active member of the improv/experimental scene in the DC area, he has played with Colla Parte, Trio O, Large Glass Bead Game and the Subtle Body Transmission Orchestra.

“One Mutual Happiness” will be performed as part of the Capital Fringe Festival at at Mead Theater Lab at Flashpoint, 916 G St. NW on the following dates:

Visit: http://www.unclefunsy.com/ for more information on the production.