In this shrinking house, I am still growing,
my wrist gripped between window and sill,
one toe pinched in neat joists.
Our mother’s footsteps echo far away.

In this dollhouse, animals and plates die
under glass, a frozen china cabinet phalanx.
The wedding cake couple will keep on waving
to no one forever, through dust.

At midnight, I creep into the bathroom.
I focus my stare into the mirror, whisper
my own name three times, and wonder
why I still can’t see my face.

The father’s oatmeal-colored apartment
absorbed all who entered:
his masked daughters, their mute boyfriends.

It swallowed even the mother’s twilight gifts
appearing by the door: a smashed chair,
torn photos tucked inside letters.

In the night, as rain pattered the windshield,
the father said to one daughter,
Bridge Ices before Road. Do you know why?

when there’s a bridge, the earth can’t heat the road
so the road stays warm and the cold bridge
ices faster than well ha faster than anything else.

She looked at his red plastic cup
with melting ice and wanted to be
the road ahead instead of the bridge. 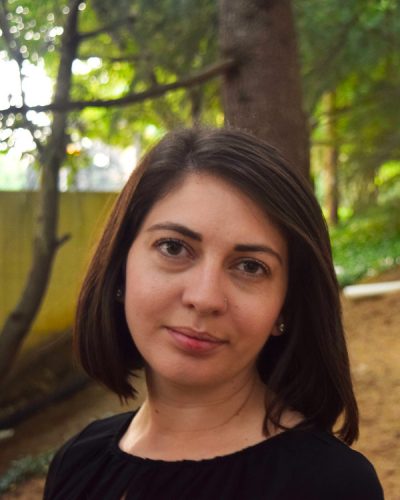 Diana Smith Bolton is the founding editor of District Lit. Her work has recently appeared or is forthcoming in Cider Press Review, Coldnoon, concīs, The Fem, Gargoyle, The Northern Virginia Review, The Pedestal, The Pinch, and elsewhere. She lives in Arlington, Virginia.