The hives have gotten through another year—

I’m sure you’ve heard of the alternative.

Buy soon and you can have the Holsteins here.

No guarantee of how much milk they’ll give.

Tobacco had the soil worn out before

Some fallow years and compost brought it back.

The orchard yields enough to eat and store,

Or make a batch of your own applejack.

Of course, a price like this can’t buy perfection.

Feel free to ask me questions and take notes.

You get the feed lot’s smell from that direction.

The stream is muddied by a neighbor’s goats.

Let’s step inside. The gun rack’s over there.

This far from town, you’ll want a gun somewhere. 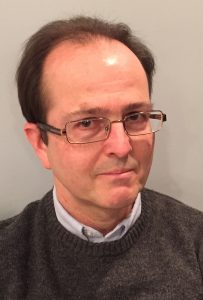 J.D. Smith’s fourth poetry collection, The Killing Tree, will be published in July by Finishing Line Press. His other books include the poetry collections Labor Day at Venice Beach (2012) and Settling for Beauty (2005), the humor collection Notes of a Tourist on Planet Earth (2013), the essay collection Dowsing and Science (2011) and the children’s picture book The Best Mariachi in the World (2008). Awarded a Fellowship in Poetry from the National Endowment for the Arts in 2007, he has published poems in print and online publications in the United States and other English-speaking countries including The Awl, The Bark, Light, Nimrod, Tar River Poetry and Terrain. His reviews and essays have appeared in publications including American Book Review, Boulevard, Gastronomica, the Los Angeles Times and Pleiades, and his poetry and prose have appeared in several anthologies. Smith works as an editor and writer in Washington, DC, where he lives with his wife Paula Van Lare and their rescue animals. He tweets @Smitroverse and maintains the pages http://jdsmithwriter.com and https://www.facebook.com/JD.Smith.Poet.and.Writer/