I grew up in the suburbs of DC, in Vienna, Virginia, and I can remember sitting in my grade school classroom enthralled by the paintings in the textbooks. I felt like I could just look at the pictures and not even have to read the text. I was inspired early, in that way, by visual storytelling.

By the time I got to middle school I was using my drawing skills to try and avoid other subjects (like math and reading.) I remember a book reading assignment in 7th grade where we were supposed to read a biography and write a report, and rather than actually reading a book and writing a report I drew a portrait of John Lennon and stapled it to the front of some book about Lennon. The teacher later told me she knew I hadn’t read the book but gave me a good grade because of the drawing. I was probably hooked from there.

I started painting seriously in high school and went to college for art at Shepherd University in West Virginia. While in graduate school I did a workshop with Bo Bartlett, who works in a style and aesthetic similar to Norman Rockwell, or Andrew Wyeth. He taught me how to use under-painting, and a grisaille (a grey scale under-painting for portraits) and I use those techniques in my paintings. The viewer can sometimes see the warm reddish tone of the under-painted sienna glowing through a glaze of paint in the shadow areas of the completed paintings, as well as around certain edges. The evidence of the under-painting in the final product allows the viewer to see some of the process and it also associates my technical approach to the American Realist school of painting. The lineage of painting methods and techniques is exciting to me because I feel I’m part of a legacy as an artist. I consider myself an American Realist painter in the line of Thomas Eatkins and Winslow Homer.

I live and maintain a studio in Vienna, Virginia, and teach as an adjunct faculty at nearby George Mason University (GMU). I paint daily. Lately I’ve been working in the studio early in the morning, taking a break for lunch and then heading to teach in the afternoon. If I have a show immediately upcoming I typically get back in the studio after dinner and put in a couple more hours.

My current show includes fifteen oil paintings I’ve been working on for the last eighteen months, including work I produced since and while finishing my MFA (spring 2015) at GMU. All of the paintings are oil on canvas or panel and the paintings use an array of subjects – including childhood toys, books, and family photographs — to try and create open-ended narratives.

The subjects in these paintings were inspired by my search into my own identity, and connected to that, my exploration of what is authentic and meaningful to me as an artist. I’ve felt in the past that I was just trying to be like other artists. While that’s a normal part of training in the arts, as a professional I’ve tried to really confront myself with the simple questions: what does a Nathan Loda painting look like, and what is original and genuine to me and my story? That focus has led me to thinking about my childhood and my early interest in historical visual storytelling. What are the meaningful visual memories from my childhood, and why were they meaningful?

A while ago I found some of my youthful playthings stashed away in the corner of the attic at my parent’s house. I pulled them out and thought, “wow, maybe I could use these toys to stage narratives, that may be kinda fun.” The first paintings were really just a trial to see if they would be at all interesting. As the series has developed I’ve gotten more and more invested in using the toys and objects to explore beyond my own childhood into influences on the development of our country and culture. Disney’s Davy Crockett King of the Wild Frontier, Mark Twain’s Adventure’s of Huckleberry Finn, and my childhood Play-mobile toys of Cowboys and Indians have all become subjects in my artwork.

I hope you’ll come check out my current show, “Histories, Heroes and Small Moments” at the Adah Rose Gallery April 28- June 5, 2016, and I appreciate your comments. 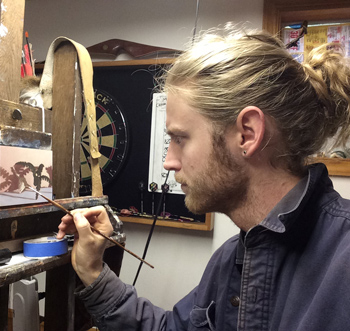 Nathan Loda is an American realist oil painter and adjunct faculty at GMU. Loda received an MFA degree from George Mason University in 2015 and a BFA in painting from Shepherd University in Shepherdstown, WV in 2011. During his undergraduate studies he had the opportunity to travel through out Latin America and spend a semester abroad at the Lamar Dodd School of Art in Cortona, Italy. Loda has exhibited in numerous galleries and exhibitions across the country and his work hangs in private and public collections. His commissioned works for restaurants such as Founding Farmers Tysons and businesses such as KO Distilling in Manassas VA, have been published in Interior Design magazine and numerous local newspapers. He has been a semi finalist for the Bethesda Trawick Prize for Contemporary Art and recipient of several prizes and honorable mentions in juried shows. Nathan is represented by The Adah Rose Gallery in Kensington, MD. For more information see: www.nathanloda.com, www.adahrosegallery.com, www.artsy.net .