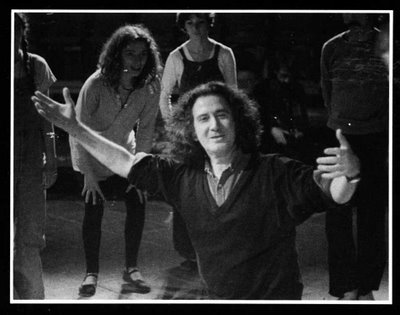 Brazilian theater director and political activist Augusto Boal was internationally known as the founder of The Theatre of the Oppressed (TO). Oppression, according to him, happens when one person is dominated by the monologue of another and has no opportunities to reply, dialogue, or interfere in the change of an event. Boal’s life was devoted to giving those who are in powerless positions ways to express themselves and become agents of change. He mainly did that through theater. In his efforts to transform theater from the “monologue” of traditional performance into a “dialogue” between audience and stage performers, he experimented with many kinds of interactive approaches to theater, which resulted in methods that weaved theater and therapy, as in The Rainbow of Desire (1995), a text that aimed to raise individuals’ awareness about internal oppressions and how they can separate the individual from society, or in the Legislative Theatre (1998), when he used performance as a means to make politics. Together with The Theater of the Oppressed (1985), his signature work, they form a legacy of artistic political activism against the continued dominance of a privileged few.

In his first theatrical experiments, audience members were empowered to stop a performance and suggest alternative actions for the character(s) experiencing oppression. In response, the actor(s) would change his (their) behavior and transform the situation. But during one performance, a woman in the audience, outraged because the actor was not able to express her suggestion, went up to the stage and performed what she meant. The event became the source for Boal’s concept of spect-actor, someone who perceives and acts accordingly, and his theatre was transformed: he discovered that through direct participation members of the audience became motivated to actually experience the change they wanted, were able to reflect collectively on the transformation, and felt empowered to generate social changes in everyday life.

Augusto Boal (1931-2009) passed away on May 2. A week before, in an emotional exchange of emails, when we were saying goodbye to each other, he sent me this text, which had been sent to UNESCO, on the occasion of International Theater Day. To celebrate his life, his struggle for “peace without passivity”, and the creativity of his work, and aiming for its continuity, I share his last thoughts with you.

Even if one is unaware of it, human relationships are structured in a theatrical way. The use of space, body language, choice of words and voice modulation, the confrontation of ideas and passions, everything that we demonstrate on the stage, we live in our lives. We are theatre!

Weddings and funerals are “spectacles”, but so, also, are daily rituals so familiar that we are not conscious of this. Occasions of pomp and circumstance, but also the morning coffee, the exchanged good-mornings, timid love and storms of passion, a senate session or a diplomatic meeting – all is theatre.

One of the main functions of our art is to make people sensitive to the “spectacles” of daily life in which the actors are their own spectators, performances in which the stage and the stalls coincide. We are all artists. By doing theatre, we learn to see what is obvious but what we usually can’t see because we are only used to looking at it. What is familiar to us becomes unseen: doing theatre throws light on the stage of daily life. 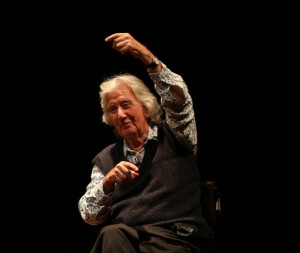 Last September, we were surprised by a theatrical revelation: we, who thought that we were living in a safe world, despite wars, genocide, slaughter and torture which certainly exist, but far from us in remote and wild places. We, who were living in security with our money invested in some respectable bank or in some honest trader’s hands in the stock exchange were told that this money did not exist, that it was virtual, a fictitious invention by some economists who were not fictitious at all and neither reliable nor respectable. Everything was just bad theatre, a dark plot in which a few people won a lot and many people lost all. Some politicians from rich countries held secret meetings in which they found some magic solutions. And we, the victims of their decisions, have remained spectators in the last row of the balcony.

Twenty years ago, I staged Racine’s Phèdre in Rio de Janeiro. The stage setting was poor: cow skins on the ground, bamboos around. Before each presentation, I used to say to my actors: “The fiction we created day by day is over. When you cross those bamboos, none of you will have the right to lie. Theatre is the Hidden Truth”.

When we look beyond appearances, we see oppressors and oppressed people, in all societies, ethnic groups, genders, social classes and casts; we see an unfair and cruel world. We have to create another world because we know it is possible. But it is up to us to build this other world with our hands and by acting on the stage and in our own life.

Participate in the “spectacle” which is about to begin and once you are back home, with your friends act your own plays and look at what you were never able to see: that which is obvious. Theatre is not just an event; it is a way of life!

We are all actors: being a citizen is not living in society, it is changing it.