The Sloth Ensemble: how far can you stretch sound before it breaks? by JS Adams

A few months ago experimental musician Chris Videll approached Daniel Barbiero and me to provide new works for a drone night that Chris is curating for music promoter Sonic Circuits. We three then began an on-line conversation about pushing drone, monotonic music to its near-breaking point extreme as fully-static sound, and we’ll be performing the product of those discussions on Saturday, March 7, 2015 at Pyramid Atlantic in Silver Spring, Maryland.

Daniel Barbiero has pulled together a small acoustic ensemble LET X ≠ X to perform as a prelude to my ensemble piece. In Daniel’s LET X ≠ X, performers are instructed to play a concert D while continuously changing timbres. (For the variable “X” substitute “concert D;” through shifts in instrumental color D ≠ D.)

My piece, “A T N I G H T L Y I N G I N B E D S H E R E R E A D S T H E L E T T E R F R O M H E R G U N N E R A T T H E F R O N T”, is conceived as a glacial dirge (something akin to La Monte Young’s “Dream House”) and is based on the poetry of F.T. Marinetti. I’m realizing the concept by applying digital malfeasance (purposeful glitches) and communications decay to the poetry. I translated Marinetti’s poem to Morse code, and then ran the graphic poem through OCR (optical character recognition) software. OCR is the mechanical or electronic conversion of images of typewritten or printed text into machine-encoded text. While OCR is a common method of digitizing printed texts, the morse code printing of Marinetti’s poem scanned as a gibberish of punctuation and random letters — which we’re using as a score (see below).

The work is composed for cello, guitars, electronics, optical character recognition, voice, Morse code, text-to-voice programming, static visuals, prepared vinyl, and vintage Califone turntables. Wherein earlier works Morse code was MIDI-transcribed to piano, this piece uses the unaltered audio of the dots and dashes in the mix. Prepared vinyl for the piece will be two vinyl stereo-test pitch recordings with the center holes of the records chiseled out to wobble the playback, and creating wave interference. The opening section of the piece will be near-static waves of sound that finalize as a contrasting staccato of Futurist sound poetry and L’arte dei Rumori: How far can you stretch sound before it breaks?

I’ve been interested in sound and sound manipulations since I was a child. I was that artsy neighborhood kid, and luckily I early on found willing, like-minded collaborators. We were inspired by vinyl albums we purchased from the Import bins at downtown Chicago music store Rose Records and were encouraged to find that it was in our grasp to create similar sounds. We even borrowed the audio-tone generators from our school science lab.

We were not trained musicians and didn’t imagine ourselves to be “making music.” We felt that we were visual artists expressing our creativity through sound. One early experiment included my cousin’s electric guitar mixed with primitive percussion. Another involved tape loops on a hulking Bell & Howell analog reel-to-reel tape recorder. For another I pulled small lead weights from my father’s workbench and recorded them bouncing against the tone arm of record players.

My early college introductions to the music of John Cage and David Tudor, Cornelius Cardew, Mauricio Kagel, and Iannis Xenakis, reinforced my sense of conceptual composition and visual scores. I consider my backing tracks and compositions as audio collage, or performance constructions, and I continue to be grateful for the generosity of the like-minded artists joining me and adding their talents to my trajectory. 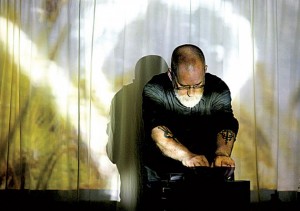 Inner Compass Golden shovel from David Whyte’s poem “Sweet Darkness”“…anyone or anything that does not bring you alive it too small for you.” It could rain...
Literary Arts

DetoxIn the morning her long hair drapes like black tears over her shoulders,her Hispanic bones bruised with alcohol and sorrowso that when she says...