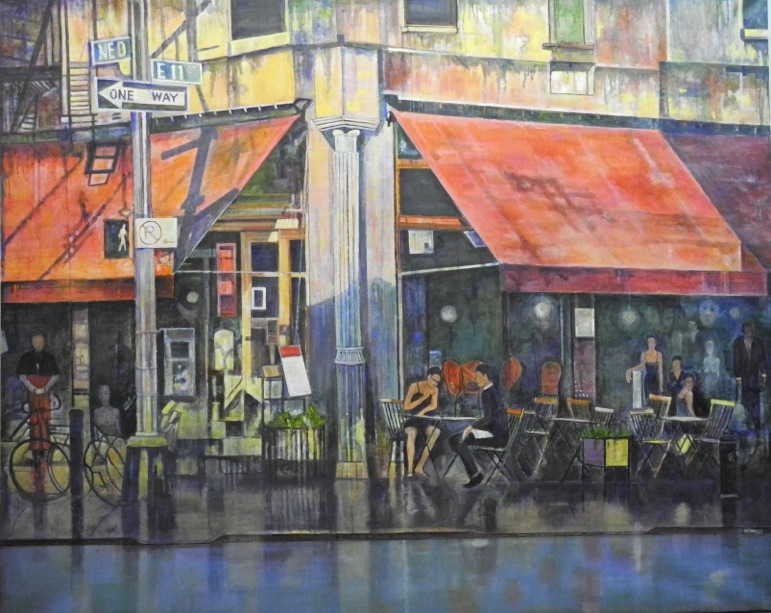 Yesterday I spent several hours working on one of my current projects, a travel-guide for painters. I do most of the work at my in my condo-studio in Adams Morgan and at a nearby café, Tryst. I moved to Washington D.C. in 1991 with my son, who is now 27 years old, and for fifteen years I worked in the federal government after having spent a lifetime as a practicing landscape architect, including seven years as a professor. Until relatively recently my son, Karl, lived with me. Raising Karl in DC allowed me to develop deep connections with this lovely and vibrant city.

Having trained in architecture and environmental design, many of my paintings are landscapes, or cityscapes. For nearly twenty years I’ve been traveling to Europe with friends for extended painting travels. Over the years I’ve found the best places to paint, and my current project is assembling paintings of the Italian and French countryside for a travel-guide for painters. My first publication will be entitled An Artists’ Odyssey: Painting Sicily.

I’ve been working on this project for four years, including five painting and research trips to Italy and Sicily. While on those trips, I identified two-dozen extraordinarily scenic towns and villages for touring and landscape painting. My lavishly illustrated book describes how to get there, and where to stay and paint.  My writing will allow me to share my travel and art experiences in Italy and France.

I spend some time each week working on new paintings, unrelated to the travel guide. Most of my painting time goes into my large, almost mural-sized, city-scenes and streetscapes, for which I am best known. The City of Washington purchased a collection of my scenes for its public art collection, and those paintings now hang in the offices of City Councilmen, including Councilmen David Catania and Jim Graham. I’ve been painting city-scenes consistently since arriving in DC more than twenty years ago, and I estimate I’ve painted 75-100 total. Many are now historical, the buildings having been torn down or businesses changed. I believe I am the only active artist in DC who focuses primarily on city scenes.

I’ve been active in the DC arts community as an exhibiting painter for a while now, including sixteen years as a member of the Arts Club of Washington, two of those years as its President (2011 and 2012).

You can now see some of the paintings I’ve completed over the past half dozen years hanging at Tryst Café in Adams Morgan right now. My show, titled The Café Society II, is showing until May 6, 2014.  What I enjoy the most about painting is the act of painting, a time when I enter “the zone”, a state of joy and clarity. 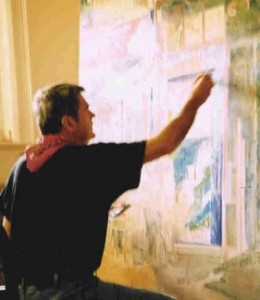 Jack Hannula began a life of art with childhood inspiration and instruction from his artist-teacher mother. After earning a B.S. in Environmental Design from the University of Massachusetts/Amherst, Jack went on to receive a diploma from the Conway School of Landscape Design and in 1977, a Masters in Landscape Architecture from Harvard University’s Graduate School of Design where he won the prestigious Webbel Prize for “excellence in landscape design”.

Jack is accomplished in a variety of media including drawing, watercolor and oil. He is currently writing a book, Artists’ Odysseys: Painting Sicily & Italy. Jack is also a poet, writing in the Romantic style (www.LandscapesAndSonnets.com).

Jack has held professorships at the University of Georgia and the Universite’ de Montreal; and also served as a Peace Corps volunteer in Kurdistan, Iran where he designed parks and did landscape art. Jack has always considered landscape design a form of “living art” and the ultimate “installation art”.

Today, Jack resides in Washington, D.C. where he was President of the Arts Club of Washington (2011 & 2012), and where he also served as Exhibit Committee Chair, officer and member, Board of Governors since 1998 (www.artsclubofwashington.org).

Jack was also a member of the International Artists Support Group (IASG) where he served as President from 2000 – 2002. He has exhibited his art extensively in Washington; internationally – in India, China, Russia and Egypt: and in New York at the Kushnir-Taylor Gallery and Amsterdam-Whitney Gallery (2004-2007). He currently exhibits his art at the Arts Club’s Spilsbury Gallery in downtown Washington. Jack was the Spilsbury Gallery’s founder (2007). His vibrant city scenes and landscapes, large and small, are in private and public collections. Much of his art may be viewed on his website: www.jackhannula.com, and on his Facebook and LinkedIn “Artist” Pages.