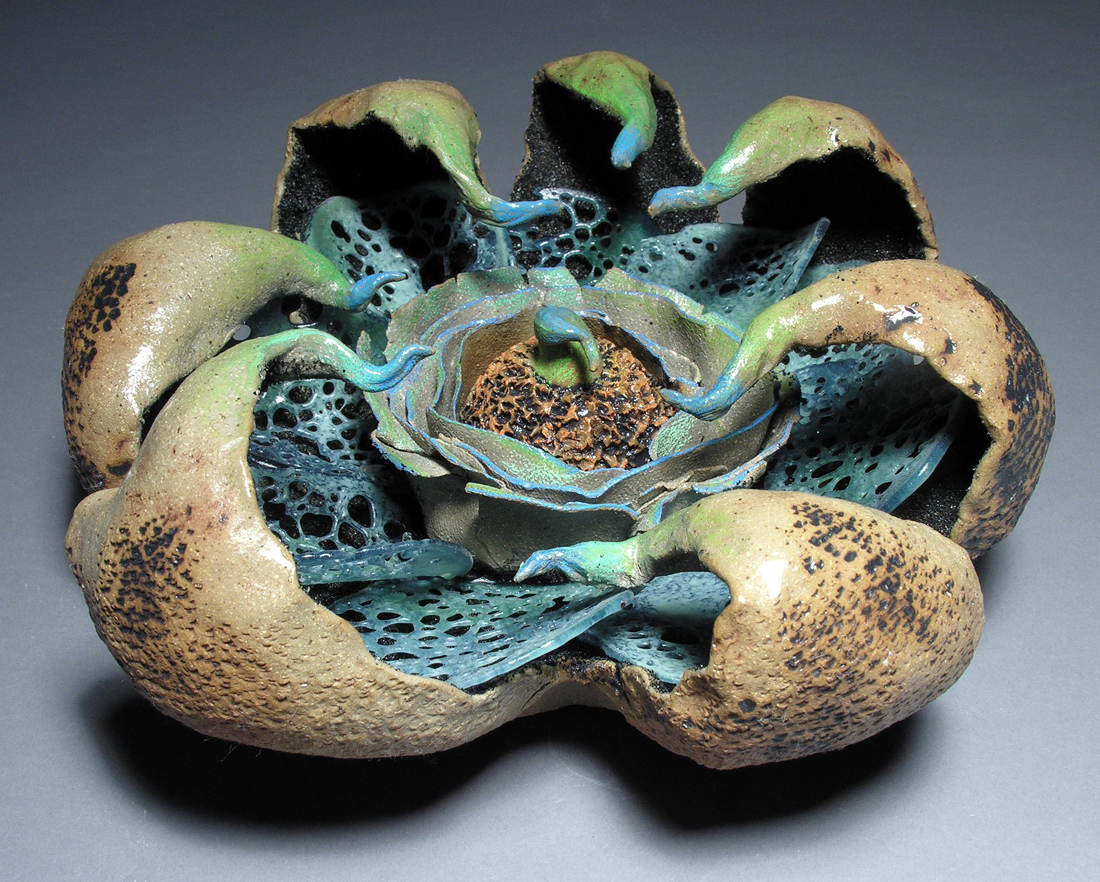 My and Alison Sigethy’s organic sculptures will be shown together in May in an exhibit titled “Full Fathom Five” at VisArts’ Gibbs Gallery in Rockville. This is our second collaboration, allowing us to revisit and expand on our previous work. Our first collaborative exhibition, “Fathom,” took place in May 2013. In this exhibit, as in the last, we’re creating an immersive gallery experience for viewers, including an interactive soundscape.

Alison and I share similar aesthetic sensibilities. Although we work in different media, Alison primarily with glass and myself with clay, both of us create sculptural forms that relate to the natural world in a non-literal way.

My sculptures combine visual elements from nature, including imagery from the ocean depths, the detritus of the forest floor, and microscopic life. My goal is to create work that can be simultaneously sensual and scientific, beautiful and ominous. Alison’s glass forms are also organic, and abstract. Her pieces embody contradictory ideas of beginning and end, rebirth and decay, without preference. Her goal, she’s told me, is to create dialogue about the continuum of life and our place in it.

The idea to collaborate was spontaneous. There was little forethought, just an on the spot mention of the possibility and an immediate acceptance of the idea. Our collaboration was seamless, and in many ways simple. Throughout we were of the same mind.

The process we used for creating our collaborative sculptures involved each of us developing a form or forms and turning them over to the other to complete. Alison gave me a multitude of small glass forms; delicate, lacey and colorful… very different from my own work. Viewing and handling the work was a pleasure in and of itself and it piqued my fancy. The forms I created in response were designed to hold her work as if the glass pieces were growing or blooming out of my clay form.

Alison and I involved John Vengrouski, a sound designer, to create a sound environment for our work to exist in. John regularly creates soundscapes for galleries, theater, dance and film, and the song movements John created are, at core, tone poems… emotional mood setters. Their intention is to create a sense of reverie. As a collaborative work, they are also pointedly intended to complement a set of visual pieces, not replace them or reduce them in the audience’s attention. Our intention is to create a true multi-level collaboration engaging the audience’s attention and focus, and I’d love to hear what you think of the exhibit.

Liz Lescault is an accomplished ceramic artist known for her vessel forms and luscious glazes. Liz lived in Botswana and Lesotho where she studied traditional African ceramic techniques and in France where she studied watercolor. A selection of her work is part of the permanent collection of the National Museum of Botswana.

Liz has exhibited widely in the Washington Metro region both in solo-exhibitions and group shows. She was awarded a 2012 Maryland State Arts Council Individual Artist Award. In 2013 her work was selected for the “Sculpture Now 2013” Exhibition curated by Florcy Morisett and for “Siting Presence” curated by Sarah Tanguy. She also organizes and curates art exhibitions, and teaches art in her home studio. www.lizlescault.com