Dancing in the District by David Dowling

I’ve been a multi-media storyteller for more than a decade, and before I became a part of the dance world two and a half years ago I was under the impression that Modern art generally meant, “If the audience understands it, the Artist has failed at their Art.” Now I know that’s not true. Modern art wants to let you arrive at your own conclusions. And that’s the idea behind my current project, Dancing in the District. The Dancing in the District video series allows viewers to meet the dancers performing modern dance locally.

As the resident videographer at Dance Place, I’m a videographer within, and not simply for, the dance community. I regularly document performances, but I wanted this series to be a different kind of stage, a platform for the dancers own personal opinions. Video work is expensive and it’s usually near the end of the list as dance companies budget for the creation of Modern Dance shows. One of the afterthoughts is “now who can we get to film this show?” Video and video projections have become commonplace in today’s Modern Dance, but it remains an area that is expensive and hard to deal with professionally. Often because the videographers and video designers are not dancers, and so don’t share an understanding of the choreographer/creator’s desired vision.

My sister grew up dancing, so I’ve been around dance for a long time. While I was aware of Modern, my passion for dance didn’t really become part of my world until I met several local dance artists. The first artist I met was Erica Rebollar, and she is the person who really brought me into the dance community. I moved to DC and started working at Dance Place shortly after we met, having grown up in Reston. Erica is a beautiful dancer, and choreographer, and also the consultant for my Dancing in the District project.

I filmed the first session of Dancing in the District in April, 2013. At the time, I intended it to be a small series of brief biopics organized around interviews with dancers. The premise was simple: capture the ideas, thoughts and desires of a dancer and edit it alongside them dancing in an interesting or recognizable location in Washington, DC. Briana Carper, the first subject I filmed, had such interesting things to say that I felt the initial idea should be expanded, so the vision grew. Each dancer has their own personality and skills, and all of them were great sports during the shooting. This is a film about the current landscape of Modern Dance against the backdrop of what it is, and what it needs to do, in today’s world.

I’ve been editing on and off since I began shooting. I edit on both PC and Mac, and the editing is a lengthy process. I wrote and performed the musical score for Dancing in the District, and the only role I don’t have for the film is on-screen talent. While the project grew and changed I’ve had other priorities as well. I generally edit at night, while there are few distractions. 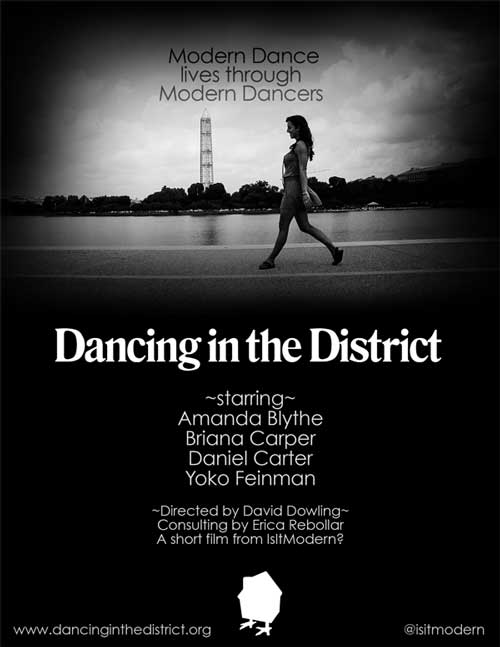 I am a firm believer that while your art is your baby, once you release it to the public it no longer belongs to you exclusively. When I release Dancing in the District, I will be unapologetic for its flaws. I’m proud that there was no money put into the project. There was no Kickstarter, no fundraising or grant fuel. The project was born and raised on an idea, and the good graces of the dancers. I feel this made the project pure, and beyond that of “give me something, so I can give you something back.”

Dancing in the District is more than a biopic, but less than Modern Art. On the surface, it tells of Modern Dance through the words of the dancers. Beneath their words and in their movements it’s a plea for an art form that is losing ground in a world more often desiring instant gratification packaged neatly within streamlined means of delivery. Modern Dance is competing with 3D films, the internet, So You Think You Can Dance, and other works that are easily accessible. Modern Dance is complex and challenging, and it is the responsibility of the Modern Dance community to make it accessible if Modern Dance is to live, and not merely survive.

It’s true that Modern Dance has a bit of a reputation for being lofty in the eyes of the casual audience goer. Dancing in the District brings Modern Dance back down to Earth by way of communicating through a more familiar language and the people who make it an art form worth seeing. This medium deserves more than a second glance from curious onlookers, and I hope you’ll watch Dancing in the District when it’s released and let me know what you think of it.

David Dowling is a videographer/photographer and founder of IsItModern?, which specializes in Dance Video. He experiments with various design elements and especially enjoys capturing unfolding images in nature. David has published a book of children’s readings, which have appeared on Rachael Maddow’s MSNBC blog. He has composed music and written several short, educational films that have been shown internationally. His Dance films have been featured in Dance Magazine and several dance websites. He enjoys documenting simple and profound architectures in nature. He currently works in Marketing at Dance Place and with Rebollar Dance, maintaining the company’s Internet, promotional and video presence.

Inner Compass Golden shovel from David Whyte’s poem “Sweet Darkness”“…anyone or anything that does not bring you alive it too small for you.” It could rain...