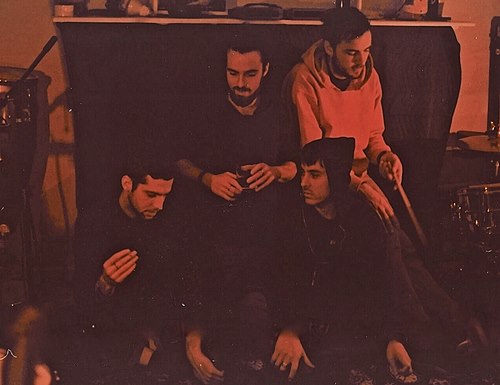 Pretty much anything audible can be interpreted as music.  Music is one of the most primitive forms of communication there is.  And it’s always been the form of communication that allows me to be my most honest, and profound.  What brought me together with the other three members of the band Young Rapids is that that statement applies to each one of us.  We are not writers.  We are by no means the best speakers.  Everything we have to express, we express most effectively through our music, our sound.

In a day and age in which one could sit for his or her entire lifetime, listen to music, never hear the same song twice and still barely scratch the surface of what is out there, it can be overwhelming to even think about bringing yet more new music to the table.  Does the public really need more music when there already exists a seemingly infinite selection of the yet-to-be discovered artists out there?  Or even more importantly, does the public need our music?

Our relationship with the public has always been a challenge for us.  We’ve always felt that there’s a discrepancy between what we do and what the vast majority want to hear.  Our sound comes naturally to us, and what we play is music that is for ourselves, and that speaks to us as four individuals on a personal and spiritual level.  In making our first album, “Day Light Savings”, we began to ask ourselves: how does the listener fall into that equation?  How are we to succeed if we only take into account our own interests?  Isn’t the whole point of creating music to provide that music to a listener?  “Day Light Savings”, in its fusing of darker and more personal moments–with our slight attempts at a more mainstream pop sound–was a search for answers.  The disconnect we often feel in relation to a vaster majority influences us, and it became a key element of the songwriting in our forthcoming album “Pretty Ugly.”

“…play your own way.  Don’t play what the public wants.  You play what you want and let the public pick up on what you’re doing.. even if it does take them fifteen, twenty years” – Thelonious Monk

Making “Pretty Ugly” has been therapeutic.  We, in the band, are happy people.  We love life, and we love each other, but like all human beings, we have our dark moments.  And those dark moments are what inspire us.  A lot of the sounds we have been experimenting with during our time in the studio are dark, moody; some almost as challenging to listen to, as they are to create.  The love-hate relationship with technology shared by all four members of the band has resulted in some highly electronic, synth-driven songs juxtaposed with lyrics that denounce our population’s over-exposure to technology.  “Pretty Ugly” also touches on corrupt political agenda, the war on drugs and, of course, the challenge of pursuing music in the D.C. area.

We’re privileged to be sharing the stage with some great bands at the 9:30 Club this coming Saturday night (1/25/14.)  We’ll be playing our new material, songs to be released on “Pretty Ugly” this coming spring, and we’re going to have a hell of a time… we’ll see if the listeners do too.

Colin Kelly plays the Drums/Bass/Vocals for Young Rapids, with whom he’s been a band member since 2010. Originally from the area, Colin studied Fine Arts at the University of Delaware, where he played in a bluegrass-rock band before returning to the DMV.

Get your tickets to the show this Saturday on the 9:30 Club website here.

The show this Saturday, organized by DCMusicDownload, is a benefit for Girls Rock DC.