Daniel Barbiero on (the) nature (of things) likes to hide 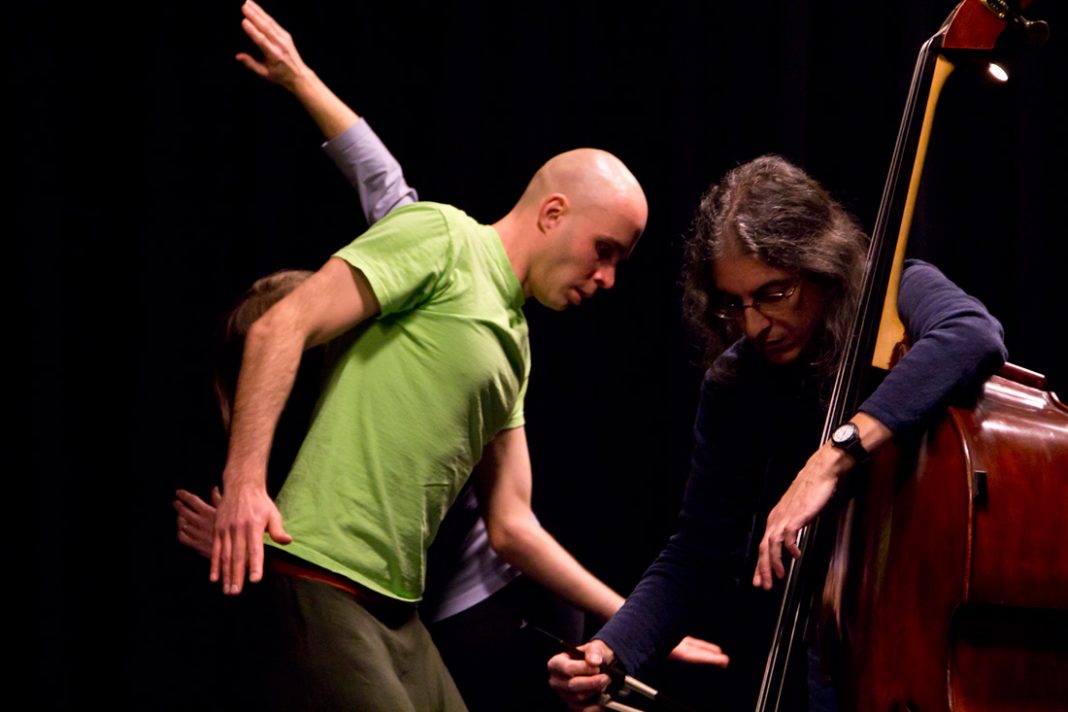 On 1 February 2014 Nancy Havlik’s Dance Performance Group will premier (the) nature (of things) likes to hide, a score for five dancers and five musicians. It will be the culmination of a seemingly unlikely process that began with the 2500 year old words of a Greek philosopher and an idea about using indirect suggestion to mold a musical—and eventually a dance—performance. The piece that would eventually become (the) nature (of things) likes to hide began as Seven Fragments of Herakleitos, a composition for a small semi-improvisational ensemble of musicians. Semi-improvisational, because I conceived the music as being improvised within certain general constraints specified by the score. This meant use of a non-traditional score. As with much of my recent work, Seven Fragments took the form of a verbal score. With their reliance on plain language, verbal scores represent a direct means of conveying information about the actions and processes asked of the performer. And yet they may allow a broad scope of discretion to the performer as well, since they can be restricted to suggesting given creative conditions or processes without specifying a determinate result. In addition, they have a near universal applicability, being equally effective as scores for music, visual art, dance and more. The first two features of verbal notation—its directness and potential indeterminacy—were what inspired me to use it for the new composition. The third feature—its multivalent applicability—is what eventually suggested expanding the composition’s scope to include dance as well as music.

The texts I chose were seven fragments quoted from or attributed to the Greek philosopher Herakleitos of Ephesus (fl. 500 B.C.E.). Herakleitos’s writings—or rather the incomplete remains that have come down to us through quotation or paraphrase in various sources–have always carried a deep resonance, not only for me but for many others over the centuries. Above all they are fascinating for the portrait they convey of a mind attuned to the enigmas that dwell in the heart of things—it wasn’t for nothing that Herakleitos was nicknamed “The Obscure.” And yet many of the paradoxes Herakleitos saw were expressed in the concrete terms of motion, change and rest. Given this, I chose the seven specific fragments I did based on their ability to convey suggestions about movement—specifically, the musical movement encoded in changes in pitch, dynamics, timbre or sound density.  Of course the fragments can do so only indirectly; the performer has to interpret how to apply Herakleitos’s general or figurative language to the particular production of any given sound at any given time. Some of the fragments, such as “hidden harmony is preferable to obvious harmony” or “the way upward and downward,” are fairly easy to apply to music; others, such as “approaching” or “(the) nature (of things) likes to hide” require a little more interpretive ingenuity. As did the original texts themselves. There have been many translations, paraphrases and collations of Herakleitos’s writings over the past 2500 years. I relied on the Greek texts presented in the Loeb edition, but based my own translations on several English and Italian editions, as well as on my instincts as filtered through work-specific creative criteria. The title illustrates my process. The original Greek contains the word physis, which can be mean “nature” or “a thing’s nature.” I chose to conserve both meanings by the use of parentheses, which allow the phrase to be read—and acted upon—either way. The score itself is trilingual, setting out the original Greek along with the English and Italian translations. I found that the nuances of the English and Italian versions tend to throw light on each other, and for this as well as for aesthetic reasons, I thought I’d use both. Although I originally intended the score for a music ensemble, it quickly became apparent that it would be appropriate for dance as well. The idea of using it for dance came about by accident, when Nancy Havlik, in whose Dance Performance Group I am music director, expressed an interest in having a text of some sort for a new piece to be developed for the upcoming season. I showed her the score to Seven Fragments, and she thought it was indeed something she could build a dance piece around. Shaping the piece has been a matter of collaboration drawing in all members of the group. Nancy came up with a set of movement phrases for the dancers to use, and choreographed a series of solos, duets, trios and ensemble passages. The dancers chose particular fragments to guide their movement, using the texts exactly as I had envisioned the musicians using the text, as more or less figurative suggestions governing literal actions. In addition, Nancy introduced the idea of integrating the spoken word into the performance by having the dancers speak parts of the text—in the original Greek. She brought in a native Greek speaker, who taught them how to pronounce the words. For the performance, the five musicians—of whom I will be one–will be given the same text score as the dancers. We’ll use it the way it was originally intended, as a suggestive set of directions that can be applied to such musical parameters as pitch, dynamics, phrasing and timbre. How our interpretive choices intersect with the dancers’ choices will be a significant source of the creative drama realized in the performance. Video: Excerpt from Swept Through (Framed), performed by The Subtle Body Transmission Orchestra + Dance Performance Group at the 2013 Sonic Circuits Festival (the) nature (of things) likes to hide will be premiered on 1 February 2014 at the Josephine Butler Parks Center, 2437 Fifteenth St. NW, Washington DC. Daniel Barbiero (1958, New Haven CT) is a double bassist and composer in the Washington DC area. He has performed with Gino Robair on the latter’s I, Norton opera and with Robert Carl on the premier of Carl’s “Changing My Spots;” he has released work under his own name and with Ictus Records percussionist Andrea Centazzo, Blue Note recording artist Greg Osby, and electronic sound artist Steve Hilmy. In addition to his solo work, he is founder and member of The Subtle Body Transmission Orchestra, a member of the free improvisation trio Colla Parte (with saxophonist Perry Conticchio and percussionist Rich O’Meara) and Music Director for the Nancy Havlik Dance Performance Group. Top photo credit: Angel Traveler by Roman Sehling