Turner to Cezanne by Annalisa Quinn 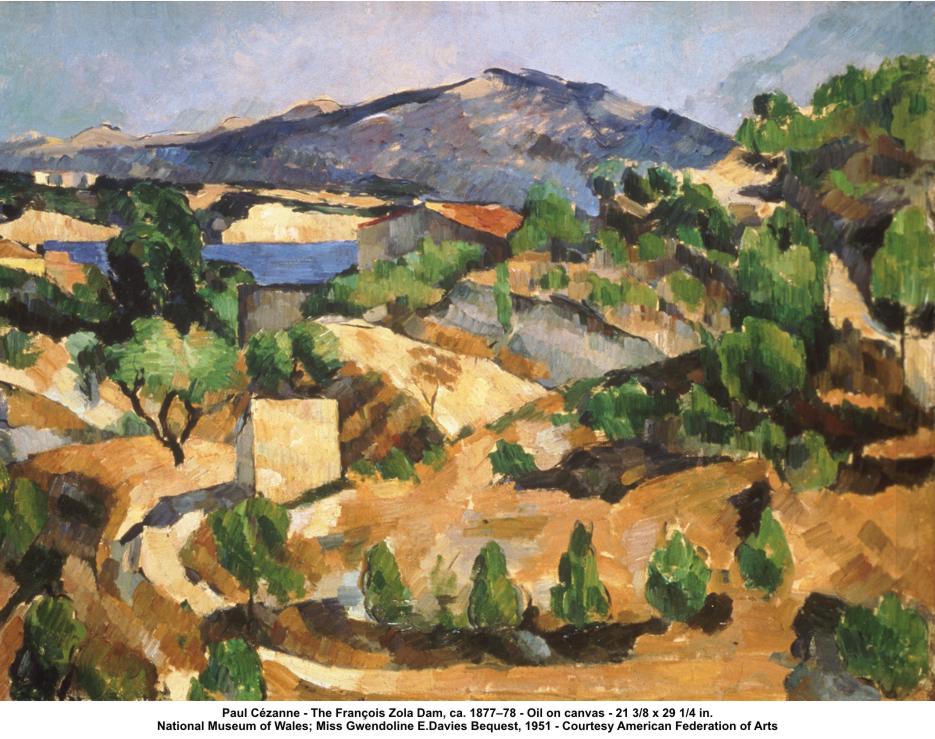 “Turner to Cezanne” is a finalist in the 2011 DC Student Arts Journalism Challenge.

On loan from the National Museum of Wales, “Turner to Cezanne: Masterpieces from the Davies Collection” features the donated collection of two Welsh sisters. The exhibit largely consists of European Impressionist, pre-Impressionist and post-Impressionist paintings. But the charming thing about this exhibit is its slight inconsistencies, its surprises. The fact that these paintings come from the collection of two amateur collectors means that the exhibit is unexpectedly personal, full of the tastes and whims of two very particular people.

The first room features Turner’s tumultuous and ethereal seascapes. Ghostly ships linger on the horizon and ocean skies are awash with violent oranges and purples. These luminous and sky-filled water paintings of his are, for me, the apotheosis of 19th century British painting. One of the best, “Charing Cross Bridge,” shows the Houses of Parliament just visible in silhouette through the heavy hanging mist of the Thames. Hints of dawn — rose and orange — suffuse the painting, with everything else a gentle blue-grey. These misty paintings, pre-Impressionist, are almost atmospheric studies.

The room that follows is highly varied — dim and lovely Daumiers, a Manet and even some Renoirs. Daumier is especially well-represented, with everything from his caricature sketches to his more famous oil paintings. Renoir’s “La Parisienne,” a painting of a tall, beautiful woman dressed all in royal blue, is a highlight. The painting — of a Parisian actress — was shocking when it was first painted because of the subject’s direct gaze and loosely tied hair. Though she is covered neck to toe, it’s not hard to see that provocation even now due to her arresting bright blue dress and strong face.

One of the lovely, unexpected surprises is James Whistler’s “Nocturne: Blue and Gold — St. Mark’s, Venice.” St. Mark’s Cathedral looms through night mist — somehow both exquisitely detailed and murky at the same time. The cathedral itself is not idealized — it’s a little dirty with a hint of scaffolding through the fog — but somehow more striking for that (perhaps because Whistler knows that those dark and dismal Venetian winter nights are really the best ones — the quietest and the loveliest). In fact, the Davies sisters apparently shared a great love of Venice, visiting many times together and collecting paintings of the city, several of which are featured in this exhibit.

Another apparent favorite of the sisters is Maurice de Vlaminck’s fiercely colored and skewed landscape paintings. One of the minor Fauvist painters, de Vlaminck was inspired by the color experiments of the Impressionists.

Mysteriously, though, and strange in light of the title of the exhibit, Cezanne only has two paintings in this collection — one, a fairly standard landscape: purple mountains, blocks of green and brown in the foreground. The other, “Provençal Landscape,” is lovely and dynamic — a tumult of color, twisting purple trees set against the pink earth.

Visitors end the exhibit with two of Carrière’s Maternity paintings — “Maternity” and “Maternity (Suffering).” These two paintings of a mother and child are brown and pink canvases, misty and lovely, though not, like many other paintings of this exhibit, imprecise. Rather, Carrière paints light on skin with such exquisite care that the paintings are exacting even though indistinct. These two sensual, subtle and graceful paintings are the perfect end to an exhibit filled with quiet surprises.

What other exhibit would juxtapose solidly Academic paintings and Cezanne? The collection is lovely — feminine, almost — and entirely unexpected. You may see any number of Impressionist exhibits, Academic exhibits, Fauve exhibits or Post-Impressionist exhibits — this is unusual because of the charming scramble. There is the familiar — Monet’s water lilies — together with the unexpected, the overlooked and the quietly gorgeous.

Annalisa Quinn is a junior at Georgetown University. She is a double major in English in Classics, with a focus on Ancient Greek. A native of Washington, DC, Annalisa has a lifelong interest in the DC arts scene and hopes that it will play a part in her future career. After college, she plans to pursue graduate studies in Ancient Greek Literature or English.