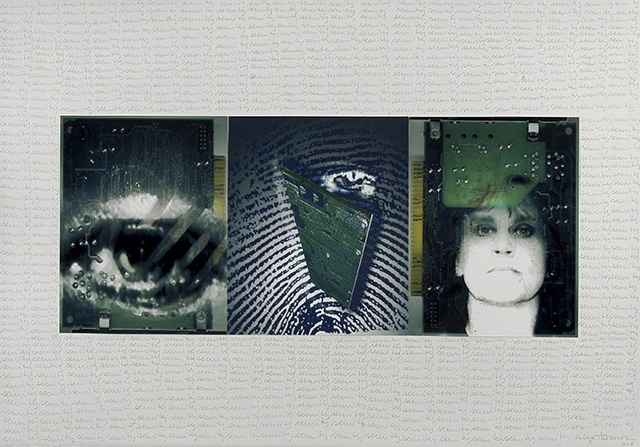 Moonlit Traveler is from a series of prints titled “Chronicles and The Garden of Earthly Delights.” After all, only in the freedom and adventurousness of a moonlit evening would anyone dare to ride on a naked fish with a doggie’s face.  I have made many prints and works on paper during a career that took me through three continents and I try to invite my viewers to join me on an exciting adventure.

This piece is the almost serendipitous product of circumstances. At the time, I was doing a lot of drawing from the model. One day, I decided that my model should wear some animal paper masks; a series of nudes with animal masks was born. I did drawings, monotypes, and etchings based on these. The whole series was called “ Chronicles” and “ Garden of Earthly Delights Revisited” in honor of Hieronymous Bosch and his amazing fantastic creatures who inhabit a world where good and evil is interchangeable.

I trained with printmakers in my native Argentina as well as The Hague, Paris and the U.S. and use both the wide range of traditional printmaking techniques, from etching to lithograph, collagraph and chine colle, to experimental digital and video work. I believe that my Argentine and European background permeates my work; I aim to combine a sensuous line with bold and symbolic imagery, bringing the light and dark side of life together. 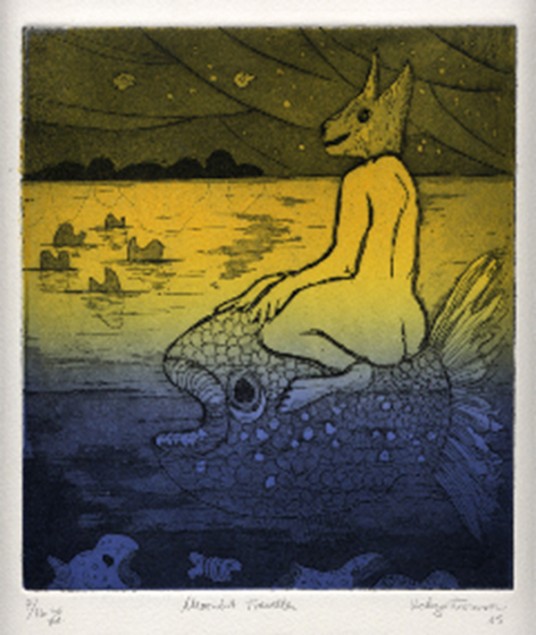 As with many of my prints, I used a combination of techniques to make Moonlit Traveler, in this case, etching and aquatint. In etching, a drawing is made with a sharp etching needle on a metal plate that has been previously covered with an acid-resistant coating. The plate is then submerged in acid, which bites through the drawn image but leaves the remainder of the treated surface untouched. After it is washed, the plate is ready to be inked and printed. Aquatint is a method that allows for larger surfaces of the plate to be “bitten” by exposing the plate to acid through layers of resin particles. (These explanations may begin to suggest to you why printmakers are so often seduced by technique.)

When the plate is ready, I applied the colors in stages. I used black etching ink for the line drawing and the aquatinted areas. I wiped the ink away in all but the lines and areas I wanted to be black. Then with a roller previously coated with blue and yellow etching ink I carefully rolled over the whole plate. I then placed a damp sheet of paper on top of the plate and ran it through the press, transferring the image onto the paper, and voilá, a print is born!

Thank you to the artist for making this print available to Bourgeon contributors. To acquire the work, click here.

Helga Thomson was born in Buenos Aires, Argentina, and studied there with German artist W. Dohme and printmakers Pompeyo and Eduardo Audivert. In Europe, she continued printmaking for brief periods in The Hague (Royal School of Art) and Paris (Atelier E. Caporaso and Jean Lodge). In the United States, Helga attended Ann Zahn’s Printmaking Workshop in Bethesda, Maryland, as well as Montgomery College, Maryland (with Z. Sikora), and the Corcoran School of Art, Washington, DC (with Gene Frederick and W. Christenberry, and digital art with Marise Riddell and Marte Newcomb). Helga has exhibited in international juried, group and solo shows. Her works are included in private and public collections (such as the Library of Congress) in the United States, Argentina, Europe and Central Asia. Helga has received national and regional awards in the United States. Helga is a member of the Maryland Printmakers, American Print Alliance, The Print Center of Philadelphia, Washington Project for the Arts/Corcoran, Arlington Arts Center, Pyramid Atlantic and the Central Asia Cultural Exchange. To see more, visit the artist’s website.