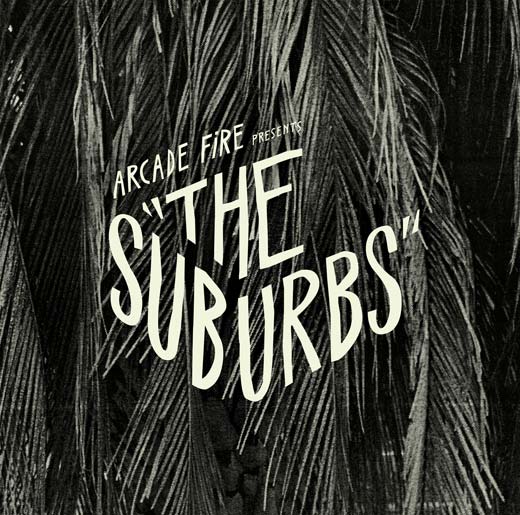 The literary accompaniment to The Suburbs is found almost too perfectly in William Faulkner’s 1950 Nobel Prize acceptance speech, in which he declared the state of youth in the union: “There are no longer problems of the spirit. There is only one question: when will I be blown up?”

The Montreal-based septuplet similarly poses the difficult questions of the age on their latest release, sometimes ironically and sometimes earnestly. Thematically organized around the threat of suburban sprawl and the replacement of one culture with another, the band manages to avoid the inevitable downer-type sensibility associated with suburban sprawl and instead replace it with total searching exuberance. Like Faulkner, they simply “decline to accept the end of man,” a challenge made immediately clear from Win Butler’s first declaration on the album amid friendly, pleasant piano plinks: “The suburbs are a lonely drive / and you told me we’d never survive / grab your mother’s keys, we’re leaving.”

This is the album Arcade Fire have been waiting their whole career to make. People are going to go under this album and not come out until they’re old and grey. If folks got excited about Funeral and Neon Bible, both of which teetered around 46 minutes of orchestral art-rock, then they should probably sit down for this one, because there’s far more being said here. Where Funeral built tunnels and made connections, The Suburbs shirks any peacemaking or coming-to-terms; instead, it shouts desperately for any sign of real life, of hearts beating real blood, echoing Springsteen’s query: “Is there anybody alive out there?”

The weird thing is, The Suburbs exhibits no huge sonic departure from AF’s previous work, but the smallest choices make the biggest difference. Like how the last high-pitched note on “Month of May” sustains gorgeously into the rockabilly opening of “Wasted Hours,” which is for all intents and purposes the ideal end-credits-to-a-film song. Or how the final track “The Suburbs (Continued)” reprises the opener of the same name, or how the guitars glitter on the soothing “Rococo,” or how the end of “Suburban War” crashes most bellicosely, almost visually. Continuity is the name of the game here, aided by a few sets of two-part songs, like the melodramatic, appropriately flat “Sprawl (Flatlands)” and the peaking, soaring “Sprawl II (Mountains Beyond Mountains).” The first “Sprawl,” the only lull on the album really, forms a platform for the second, which is a jam and a calling– specifically, “Come and find your kind.”

Perhaps the most impressive feat here is that in addition to cultivating an album that overwhelms musically, Arcade Fire has essentially made a concept album, one that pleases your ears as it eases your mind. Let us remember that North American suburbs popped up around the same time as Faulkner’s speech, creating enclaves of homogeneity and much-needed post-war stability under the watchful eyes of Truman and Eisenhower, which more or less resulted in an eventual cultural backlash (Howl, anyone?) And I mean, in every line and arching note on The Suburbs, I hear echoes of John Clellon Holmes’ 1952 essay, “This is the Beat Generation,” in which he describes a generation for which “the valueless abyss of modern life is unbearable,” one that “exhibits on every side, and in a bewildering number of facets, a perfect craving to believe.” Arcade Fire sees these same suburbs aged 60 years, and reacts with a satisfying dissatisfaction to this “valueless abyss of modern life,” which evidently (and disturbingly) has only gotten worse. That’s why the album’s escape-at-any-cost-and-take-who-you-can-with-you nature is so appealing. Win Butler practically declares a call to action in the hard-rocking “Month of May”: “I know it’s heavy, I know it ain’t light / But how you gonna lift it with your arms folded tight?”

It is with this simultaneous care and rebelliousness that the album makes its biggest statement; the music itself is equal parts moody/thoughtful and wild/free, which suits the material. From the first notes of “City With No Children,” the listener is greeted with wall-to-wall jubilation, like the pivotal sounds of rock ‘n’ roll in big bold blocky print font, an energy that is sustained for the full 60 minutes.

Keenly, even in their exuberance, the band does not lose sight of keeping their message gravely serious, even when Butler’s darling falsetto threatens to win fans simply for aesthetic appeal. It’s both droll and concerned, like Bowie’s “Heroes,” which seems to be echoed most obviously on synth-bopper “Modern Man” and “Ready to Start.” Bowie’s Major Tom was an amusing character that evinced real pain, a strange literary device that Arcade Fire grasps with ease in “Ready to Start”: “All the kids have always known / that the emperor wears no clothes / but they bow down to him anyway / because it’s better than being alone.”

“Half Light II (No Celebration),” is an instant stunner, a gently-sung track that boasts rapid heartbeat drums and a songwriter’s firm structure. It opens with a resignation (“Now that San Francisco’s gone, I guess I’ll just pack it in.”) and follows with deep-seated fear (“Pray that I don’t live to see the death of everything that’s wild.”) But beneath it all rumbles a vague hopefulness (aided by a joyful “Woo!”), a story of barreling back and forth from coast to coast, taking what is left in these desolate suburban outposts and finding the heart that must beat there because humanity is eternally, hopelessly alive. Or, as Faulkner puts it:

“It is easy enough to say that man is immortal because he will endure; that when the last ding-dong of doom has clanged and faded from the last worthless rock hanging tideless in the last red and dying evening, that even then there will still be one more sound: that of his puny inexhaustible voice, still talking. I refuse to accept this. I believe that man will not merely endure; he will prevail.”

By the time the final track comes around, the old-school cinematic “The Suburbs (Continued),” all that’s left is a question, the only way to end an album like this. The opening track is reprised beneath an orchestra and some haunted, ethereal vocals that aren’t quite sad or backwards-looking as much as they are eerie and intriguing, and the whole elusive nature of it redirects the listener to consider the driving force behind all of The Suburbs: Where are we? Who are we? Where are we going? And what will await us when we get there?

Faulkner provides an answer to that, too. “The last sound on the worthless earth,” he once said, “will be two human beings trying to launch a homemade spaceship and already quarreling about where they are going next.”

Originally from Atlanta, Georgia, Caroline Klibanoff is a junior at Georgetown University, majoring in American Studies and minoring in Film & Media studies, with a special interest in the uncertain future of the American press. She currently serves as General Manager of WGTB Georgetown Radio, where she also hosts a weekly show and writes features and reviews for The Rotation, WGTB’s online publication. She has previously written for Paste Magazine, The Georgetown Voice, and the Georgetown Hoya, where she continues a biweekly column. Caroline is also a musician and enjoys recording, and hopes to further develop her creativity and production skills through new ventures in filmmaking. Her current projects include creating a documentary on music in sacred spaces and cultivating a spring music festival for WGTB.

“Arcade Fire, The Suburbs” is one of the five finalists in the 2011 DC Student Arts Journalism Challenge.

Klibanoff’s review was first published August 4, 2010 on WGTB’s The Rotation, the online publication of Georgetown Radio. You can see it as it was first posted here.