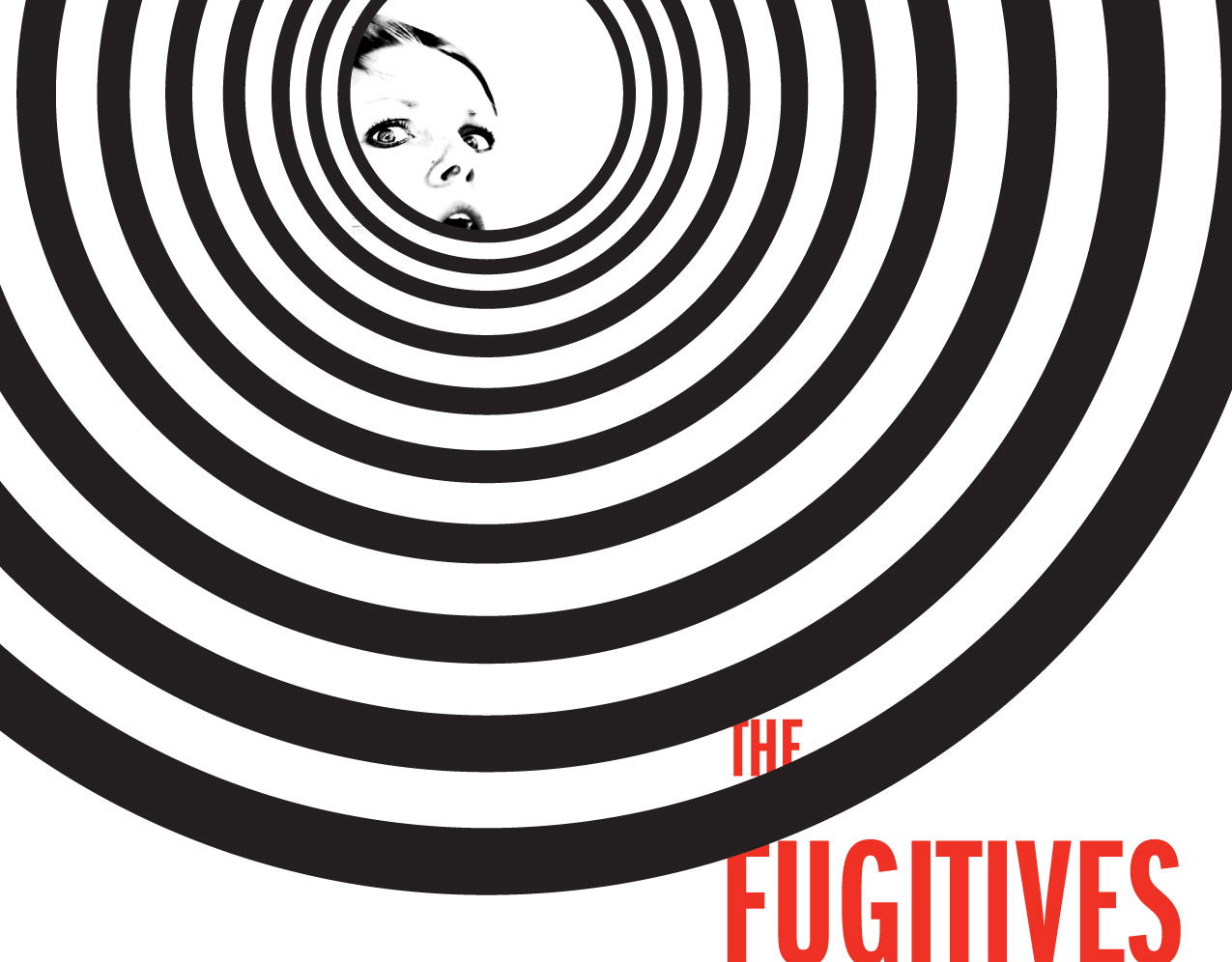 I remember the exact moment I first wanted to be an actor, but I can’t recall the day or even nail down a month or season in which I realized that wasn’t enough. My partner David and I formed La Rinascita (ree-NAH-shee-ta) to explore a collaborative model of theatrical development and production. We consider ourselves theatre artists first and our defined roles (director and actor, respectively) second. We craft each piece from top to bottom, not relying on a dictated script. While we know we’re not the first people to work this way, it feels a lot of the time like we are. We make everything up as we go; we are learning our art by doing it. The beauty and the terror of theatre is that you can’t just sit in your basement experimenting, you have to get up and share it with people. Theater isn’t theatre until you have an audience.

The first 5 months of work on our upcoming show, The Fugitives, were spent entirely at the drafting board. A deconstruction of Aeschylus’ Oresteia, our piece follows Orestes and Electra (the siblings who killed mom after she killed dad) 6000 years (give or take a millennium) after the major events of their lives. We planned everything out. It was beautiful. And it got shot to shit as soon as we hit the rehearsal room. Seeing theatre breathe can suddenly make something that was powerful on paper utterly insignificant; a wonderfully conceptualized journey into a dream world involving a glass of milk refused to look anything but silly when people actually did it.

The Québécious artist Robert Lepage, one of our major inspirations, said “Theatre takes shape in flight, when its meaning and direction escape us, when it becomes a rebellious beast that we’re unable to cage.” I engage in theatre because of this, it’s quality of self-generation. Just three days into rehearsal, almost everything about the piece had changed. Something small in rehearsal – the request for a table – lead to imaginative journeys (a running motif of consumption becomes central and the entire structure of the piece happens around eating a banquet). 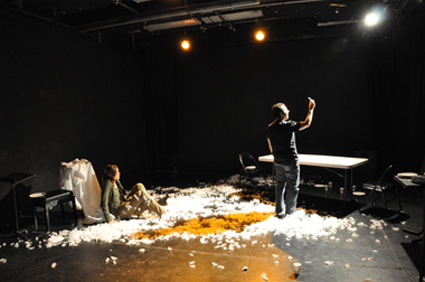 As often as not, a single image (a girl with ear pressed to a man’s chest, setting a clock to his heartbeat) or sound (the wisp of wings and cries of crows gathering) will inspire an event in the piece. Theatre is about storytelling–and I do believe that is it’s core essence–but it is also about creating visual poetry. This doesn’t imply lyricism, but refers to the poetic notion that is part of the theatrical experience: a group of people pretending together, experiencing a fleeting piece of art which will vanish when complete. I want to create theatre that lives up to that level of poetry. Which means that the language of our work–whether that be literal, spoken language or sound cues or props or gestures–is just as important to the piece as “what it’s about.”

The danger of working this way is finding yourself with a series of fascinating and beautiful moments and a piece that is less than the sum of its parts. We’re looking right now at two issues in rehearsal. We crafted Orestes and Electra fully in our heads – have we given the audience the opportunity to know these people as well as we do? Have we allowed anyone to care about them? Also, is the piece progressing directly to its inevitable conclusion? Since this is a deconstruction of a classical Greek text, we end up cutting some evocative elements we loved (Orestes obsessively writing in white chalk all over the floor of the black box we perform in) because they are no longer serving the piece as a whole. While I find editing myself incredibly challenging (you want me to throw away what????), it rewards in the end. Releasing an idea into the wild forces you to put faith that more will come along, and, happily enough, they usually do. 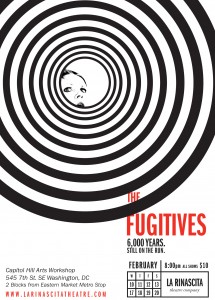 I’m incredibly excited for the opening run of The Fugitives February 10-13 and 17-20 at Capitol Hill Arts Workshop (547 7th St. SE, Washington, D.C.) Tickets are $10. For more information and reservations email admin@LaRinascitaTheatre.com Hope to see you there!

Anne Veal is a theatre artist currently based in Washington, DC. In addition to building The Fugitives, she is working acting in her second project with Tony-Award-winning Signature Theatre. Previously she has worked with the Actors Theatre of Louisville (33rd Humana Festival of New American Plays), The Kennedy Center, Project 1367, Charter Theatre, Capitol Fringe Festival, among others. This summer she, David and The Fugitives will travel to the Prague Fringe Festival. To learn more about La Rinascita Theater visit: www.LaRinascitaTheatre.com.