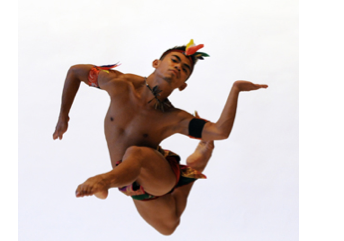 Doors have been opening for me since I won The Kennedy Center’s 2009 Local Dance Commissioning Project. With that commission, I created a twenty-five minute dance entitled “The Mountain.” When I applied for the Commission it was just supposed to be a story about a volcano eruption that caused a cataclysm, but I wanted something that would make a difference, so I asked myself, “How can I make this ballet even more compelling? More connected?” As I started preparing I would write down every concept or idea I thought might work, and the idea came to connect the volcanic eruption to the burning mountain of trash that I had also experienced as a child.

Most of the ideas and metaphors for the piece came from growing up in the Philippines. I accessed folklore, folk dances, my experience with the eruption of Mt. Pinatubo in 1991, as well as the image of the late Smokey Mountain (a mountain of trash that served as Manila’s waste disposal for decades.) 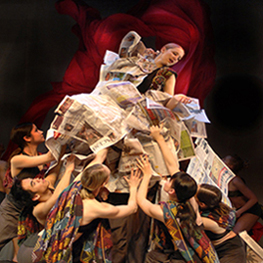 Experimentation was the common thread throughout the construction of this piece – in concepts, in the studio, and in performance. It can be very difficult to just let things happen by accident, but I have come to believe that those unplanned moments are the key to innovation. I had decided that we would have a set – not just a blank stage – and as we progressed in the studio, we experimented with creating different types of physical environments. This involved trying out different groups of materials to create the look and feel of a landfill. In the end, we found that covering the space with newspapers gave the desired effect. Though the cataclysmic volcanic eruption and the landfill in Manila were the starting points for the project, the process of experimentation helped me reveal how these two mountain events are related.

For the music, I collaborated with Domenico Vicinanza, a scientists and composer, who works for Delivery of Advanced Network Technology to Europe (DANTE). At DANTE, they developed a computer program that turns seismic vibrations from volcanoes into a piano score. This seemed like a good thematic match for my piece, because I felt that nature itself composed the music for my dance. Because of the limited funding, the costume design and costume construction also fell to me. I had to design and sew all the costumes on my own, which included the back and forth to the fabric stores. It was tough.

After the premiere last summer, Dance Place expressed interest in presenting “The Mountain”. This became an opportunity for me to produce an entire evening of my choreography – “The Mountain” together with all of the other choreography I’ve created to this point. This show will happen February 20-21 at Dance Place: my first evening completely dedicated to my choreography. I titled it “Jason and Friends” mainly because all of the dedicated dancers are my friends from CityDance. In addition to the Dance Place show, I will also be performing at the National Theater in their Gallery, in the Dance Bethesda Dance Concert, and at the new Intersections Festival at the ATLAS Performing Arts Center. Intensely, all of these performances will happen in February of 2010! 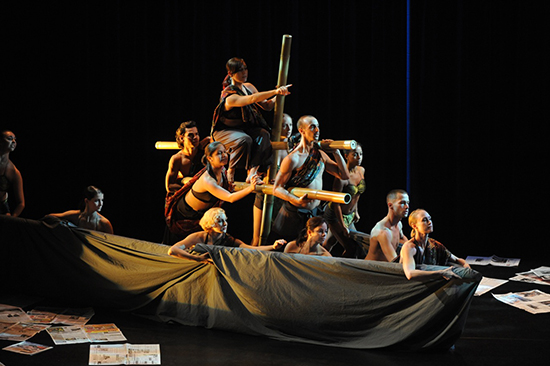 As all of these amazing performance opportunities came my way, I realized that choreography is only one part of the puzzle. The production side of dance has its own challenge. I have a newfound appreciation for Paul Gordon Emerson, my director in CityDance Ensemble. Now I know what he gets to deal with everyday. On top of performing with CityDance Ensemble, I have to juggle meetings, collaboration, marketing, budgeting, creation and rehearsal.

While preparing for a very busy February, I am excited that the processes of choreography and production continue to shape me. Every time I create, I learn things about myself. Choreographing dances gives me a deeper understanding of who I am as an artist, as well as a person. My perspective as a choreographer is very different from my point of view as a dancer.

It’s very hard to judge a dance when you’re in it – like with “The Mountain.” After a year of incubation, I feel like my patience has paid off, and I’ve managed to understand the relationship of the two different mountains. It became apparent to me that somehow these two mountains are the embodiment of what has been happening in our world. Global warming is like a volcano slowly erupting, our negligence to the environment is the heat source that is pushing the magma out that is causing this nation to reshape. I hope that our performances offer some insight, and that you will come see “The Mountain”, and my other work, at Dance Place on February 21st and 22nd.

Jason Garcia Ignacio was born and raised in Manila, Philippines. At age 12 he began training with the Gigi Felix Velarde Ballet Dance Workshop and continued dance with Ballet Philippines, Philippine Ballet Theater, and Steps Dance Studio. In 1997 he was sent by the International Theater Institute of the Philippines to study traditional Korean ritual dance at the University of the Theatre of Nations in Seoul, Korea. 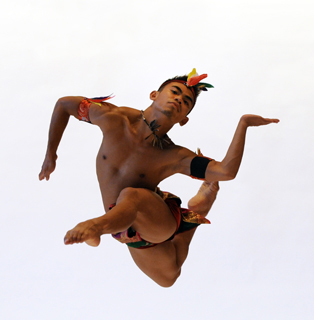 As a member of the Earth Savers Dreams Ensemble, Jason traveled across Asia, the United Arab Emirates, Europe, and the United States. In 2001 he moved to New York City to further his studies and expand his experience. He received a scholarship from Ballet Hispanico of NY, a fellowship from the Ailey School, and apprenticed for the Bill T. Jones/Arnie Zane Dance Company. In 2004 he toured nationally with the Martha Graham Ensemble and performed principal roles, including the Penitent in El Penitente and the yellow couple in Diversion of Angels. In 2008 Washingtonian magazine named Jason Garcia Ignacio one of Washington, D.C.’s Top 20 Showstoppers and in 2009 Jason won the Mayor’s Arts Award for Outstanding Emerging Artist, and the 2009 MetroDC Dance Award for “Outstanding Individual Performance.” Also in 2009, Jason also received the “PEARL Cultural Heritage Award” from the Embassy of the Philippines for his outstanding and meritorious contribution to raising awareness of and deepening appreciation for the Philippines and its rich and diverse culture and heritage through excellence in the field of performing arts. He is a member of the critically-acclaimed CityDance Ensemble, a contemporary dance company based in Washington D.C. (www.jasonignacio.com) and teaches at the CityDance Center at Strathmore.

Images from The Mountain by Paul Gordon Emerson.