What is Dance: Sixteen One Sentence Answers by New York based choreographers 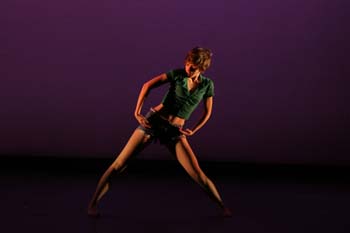 Dance is any intention-filled use of the body (fancy walking.) 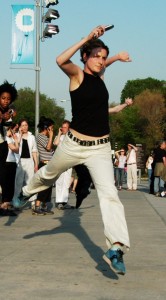 Abigail Levine has made dances for subway stations, swimming pools, sidewalks, airports, office buildings, gardens, galleries and theaters in New York City, Washington DC, Havana, Caracas, Mexico City and Taipei. Upcoming performances include Prisma Forum in Mexico City and Oaxaca (July 2009), the benefit launch of a new performance company, Move the House (May 14) and the creation of Soundtrack Q, a carnivalesque performance ride along the length of the Q subway line (from Carnegie Hall to Coney Island) with an original soundtrack played through audience members’ ipods.
www.abigaillevine.com

An energetic embodiment of internal and external stimuli—real or imagined— in space and time. – Catey Ott

Dance is living fully and freely in your skin. – Erin Pride

EDP DANCE PROJECT (founded in 2008) Anchoring the professional portion of the 2008 festival was resident company EDP Dance Project, led by Artistic Director Erin Pride. The mission of the dance company mirrors that of the Silk City Arts Festival, to build interest in the arts in Paterson through exposure. EDP DANCE PROJECT prides itself on bringing the individual to the movement. In 2008 EDP was awarded a space grant from Art of Motion in Ridgewood, NJ. They also have a partnership with the Paterson YMCA. EDP Dance Project is currently housed at La Belle Epoque in Paterson NJ. www.edpdanceproject.com

Dance is movement between conceptual realities, way of staying embodied, while taking on multiple points of view. – Marija Krtolica

Marija Krtolica is a choreographer/performer and a certified yoga teacher. In February 2008 her thesis concert ‘Mostly in Blue- the Hidden Syntax of Dreams in Translation’ was premiered at Mondavi Studio at UC Davis. Her most recent solo work ‘Cryptomnesia’ was shown at the Cloud Dance Festival in London, 8X8 in Berkeley, and at WaxWorks in Brooklyn. On April 11th section from ‘Cryptomnesia’ will be performed at the Raw Festival at NYU Studios. Marija holds MFA from UC Davis, and BFA from Tisch School of the Arts. This summer she will enter MA program in Performance Studies at Tisch, NYU.

What is dance? my short answer is — any written or verbal description could only describe the edges because of the sheer aliveness and uniquely visceral experience of it. – Sasha Soreff

Sasha Soreff’s schoreography has been seen at venues throughout New York and New England, including the Ailey Citigroup Theater, Cunningham Studio Theater, Long Island University, 92nd Street Y, American Living Room Series at HERE, ArcLight Theatre, and Portland Dances!, as well as on WNET’s MetroArts television station. Sasha danced with Isabel Gotzkowsky and Friends from 1998-2004. She served on the faculty of Dance New Amsterdam (formerly Dance Space Center) from 1999-2006 and is now a regular guest/substitute teacher. A Maine native, Sasha graduated from high school at North Carolina School of the Arts and received a BA from Barnard College. Sasha Soreff Dance Theater will present the premiere of “The Other Shoe” June 25-28th at the Ailey Citigroup Theater. www.sashasoreffdance.com

Performance where movement is the primary medium of communication. – Jessica Bonenfant

Jessica Bonenfant makes dances here, there and everywhere. She is Creative Director of Odonata Dance Project and one half of Greenfield & Bon: Purveyors of Fine Dance Theatre, a Brooklyn based duo that performs, tours and educates with a focus on collaboratively created dance theatre and contemporary partnering. www.odonatadanceproject.org

Dance is recognizing and communicating our collective conscience, our interdependence, through the moving body. – Sahar Javedani

Iranian-American choreographer Sahar Javedani is Artistic Director of compani javedani. She holds a MFA in Choreography and Integrated Media from CalArts and a BA in Dance, Theater, and French from Hollins University. Javedani is currently a 2008-2009 Artist-in-Residence at the Tribeca Performing Arts Center and participating in the 2008-2009 Fresh Tracks Performance and Residency Program at Dance Theater Workshop. In May, Sahar will be performing “in the Middle, somewhat aggravated” for Danspace@BRICstudio series curated by Abby Harris-Holmes and Sarah Maxfield. www.javedani.com

The simple answer is: what isn’t dance? I’m sticking to that. – Ashley Friend

New York City based choreographer Ashley A. Friend formed the project-based dance company The Contemporary Dance Core .tcdc. in 2006. Friend premiered the evening-work Sunshine & Dirt at the Joyce SoHo in 2007. That same year she received the danceWEB Scholarship and attended the five-week ImPulsTanz Festival in Vienna. Friend performed the solo-work ID for Movement Research at Judson Church and in 2008 the 92nd St Y produced the evening-work for their Sundays at Three program. Friend received the Access Dance scholarship to attend the 2008 Dance/USA conference in Denver, CO and New York. Her current project, Honey Flat, has been performed for Movement Research at Judson Church and Chez Bushwick (2009). And, and, and, now 60×60! www.dancecore.org or www.ashleyafriend.com

Dance is the Soul speaking through the body. – Carol Knopf

Carol Knopf is an an aerialist/ dancer. My choreographic works explore both the air and the ground. As a poet of dance, any genre of movement could find its way into my work since all that matters is the expression of the moment. I explore movement until it reveals to me some new aspect of the life always bubbling within. www.mac.com/poemdancer and Youtube.com/caroldancer

Dance is everything that is good – Cary Curran

Cary is dance captain/choreographer for the infamous downtown dance troupe The Dazzle Dancers. She is a member of the internationally renowned Big Art Group and has starred in Shelf Life and Flicker as well as originating the role of Julia in House of No More at PS122. She most recently appeared in Self at Hand, a production by the innovative young company EAVESDROP in Maryland at the Baltimore Theatre Project. She has also been a guest star in the improve/sketch comedy troupes Pu Pu Platter and Piggy. Cary frequently collaborates with performance artist Mike Albo and starred in his play, Sexotheque. Her short film, co-directed with Brian Winkowski, Wonder Woman: Battle with the Basher has played in festivals all over the world and won best short film in the MIX Brazil Festival. Cary and the DD’s were featured in Adam and Steve, which is currently playing on LOGO.

Dance for me is a form of meditation and prayer that leads me through form, energy, and emotion to a state of expression wherein I am finally able to get out of my own way and become a channel for all that is divine. – Jordan Marinov

bnw:dance is a small, New York City based dance company bringing emotion into motion and taking risks where risks are needed, in today’s world. Choreographer Brittany Whitmoyer recieved her BFA in Dance from East Carolina University and has studied under many artists such as: Bridgman/Packer Dance, Bebe Miller, Kevin Wynn, Nancy Stark Smith, Monica Bill Barnes, and Rodger Belman. bnw:dance has performed at the Uptown Performance Series, and will be self producing at BAX/Brooklyn Arts Exchange in May!

Dance is: movement that is larger than pedestrian movement and can be done for self-enjoyment or to perform for others. – Caron Eule

Caron Eule received her BFA in dance and composition from SUNY Purchase and has also studied at the London Contemporary School of Dance, the Bat D’or School in Israel, and The Paul Taylor School in New York City. She has performed with NYC choreographers such as Stephan Koplowitz, Daniel Gwirtzman, Larry Keigwin, Tina Croll, and the Shadow Box Theater and currently teaches creative movement and pre-ballet at Ballet Hispanico, and ballroom dance in inner-city schools for Pierre Dulaine’s Dancing Classrooms. Along with being the Artistic Director of C. Eule Dance, Ms. Eule has also choreographed for theater, film and opera. www.ceuledance.org

It is an intention? A Miracle?
-Chloe Douglas

Chloe Douglas teaches Pilates, Yoga and Dance. She graduated from NYU with her BFA in 2005. She has performed with Noemie LaFrance, Ashley Wallace, Darcy Naganumi and Sudden Enlightenment Theater. www.chloedance.com

I don’t think it can be appropriately articulated in words, but I will say, it’s an altered state of being. – Julie Fotheringham

Julie Fotheringham performed as a dancer/acrobat in Cirque du Soleil before coming to New York to make her own work. Here she has shown her contemporary dance/performance art solos is various venues including Dance New Amsterdam, The Living Theatre, and Monkeytown. She also brings her work to unsuspecting audiences with her uninvited guerrilla improvisations in public spaces. www.juliefotheringham.org

What is dance? Life! – Tamora Petitt

Dance is what you want it be, a movement of memories and memories to be made. – Veronica Carneo

Veronica Carnero is a California native and living as a Brooklyn-based dance artist. She is a graduate from NYU’s Tisch School of the Arts. Her solo improvisation work has been a focal point thus far.