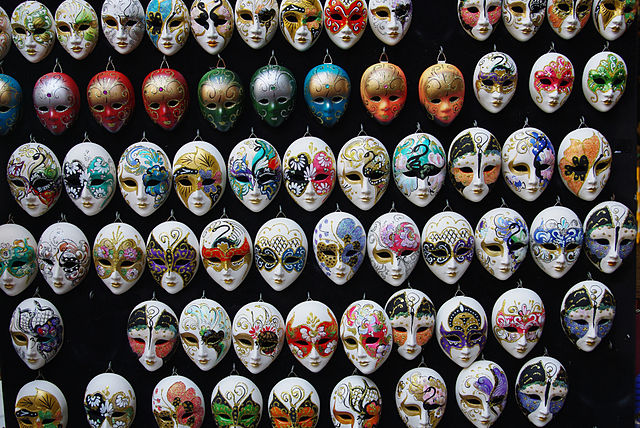 Masks are the order of the day. —Sylvia Plath

A lot of people
know my mother.
And she knows them, too.

I know—or I guess I’m learning to grow out of, or maybe into, this knowing—that my body has had enough with the caving.

I mean, the adventurous girls at camp, with their bandanas and headlamps, would venture into pitch-dark caves. I mean, I’d crawl through the blue, to her, as if at the bottom of Lake Michigan. We’d watch trashy TV and eat buttered cinnamon swirl toast. Sometimes the power would go out. At any rate, Lydia’s the one who could catch lightning bugs—not to be mistaken with fireflies. And I was good at spinning in circles.

The universe has holes. As does the black and green feathery thing affixed to the purple wall of the girls’ bathroom. Marilyn Monroe has a home there, too. She dances, she dissents, she grows, she sweats, she bleeds on the pages of her days, says a framed work by the toilet.

I love when people compliment my eyes. They’re not “mine,” really. At a gas station, a stranger approached me, and said, For what it’s worth, I think you’re very beautiful. This was right after I graduated high school—when I kept seeing bruises emerge out of nowhere, all over my arms and legs. God, it gets cold at night, still. He never did see
my eyes.

These days, I find myself returning, often, to 1963. In London, a melting, though the pipes were frozen, and two small warm bodies could bear it. Aging already, pink memorandum paper. I’m yelling, but this is a failed resurrection.

Months later outside of Milwaukee, the former midwife will become a mother. And a woman will sort of be one from the beginning—will passionately break a tennis racket, will move to London for a summer while someone who loves her falls in love with the one he’ll really end up marrying. No hard feelings. She’ll give me a name.

She’s curled up in an armchair now, watching MSNBC, as a tiny humidifier exhales mist.

My father smokes a cigar just outside, to the sound of The Who’s “I Can See for Miles and Miles.”

Oh, this old mixture.
Defined by neither deaths
nor disappearances.

Emily Goff is a writer in northern Virginia, with work appearing in The York Review and NoVa Bards, among other publications. She does online tutoring and haunts many a coffee shop.