One Step Down by John Huey

Toward the New Year, that late December,

we parked the car near the old Sealtest Plant

just off Pennsylvania a block down from

Washington Circle where, since 1860, the

General has sat, always astride his mount,

determined in his slave holding gentility,

as the world spun out and

And in that block the world was spinning

away from us as Joe, the proprietor, gruffly

welcomed us with an icy stare as we descended

into the gloom stepping down that small increment

to the One Step Down which was jazz and junky

central in that part of town and, accepted there,

hippie juicers, we sort of fit in without the

peculiarities of those habits related to a

noble musical profession so filled with

and we could never figure out where those ancient

45’s came from that never seemed to wear out as

generations of drunks poured in their quarters and

“Strange Fruit” came with a bitter crop defined as

the place peeled back all assumptions.

stools most nights while the student types, sitting in

the ancient wooden booths along the right wall, got

pitchers of beer for $2.50 or so and nodded sagely to

the always lovely waitresses who sometimes had what

you needed for exams in one of the beer apron front

pockets where those essential study aides, the “black

beauties,” were kept, two or three of those waking

a kid up for a day or two, this joint being known

as sort of a “one stop shop” for this sort of thing.

Philosophers all we raged far into the night till last call

touching the dreams of those real hipsters from the 50’s,

they still an echo that we just caught, some of us skeptical

of the bright colors and vague assumptions of our age,

attracted to the darker hues down here,

just that final step, that last step, those

the fog and make the world

And just before the lights came up I sat there

with a brilliant friend, later to succumb to

religion, who for now was as gloomy as a

that old Mandelstam look of doom while

pronouncing life shit as I took issue with

his threats of self-harm based on a violent

passion for a woman far advanced in maturity,

if not years, someone he just could not handle.

In the end Old Baby Jesus saving him,

he settling for that as slowly,

But for then, in the listless light of the early

hours we ventured out, covered by the

infernal glow of an all-night fire,

braced more for action than for

more words, working out the

dangers as we, ever carefully

stepped into the city 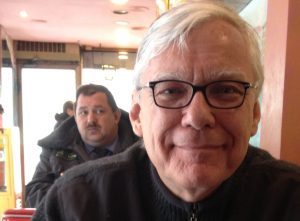 John Huey’s student work of the 60’s-70’s was influenced by teachers in Vermont such as John Irving at Windham College and William Meredith at Bread Loaf. After many years he returned to writing poetry in 2011. Recently he has had poems presented in two issues of Poetry Quarterly and in the Temptation anthology published in London by Lost Tower Publications. Work has also appeared in Leannan Magazine, Sein und Werden, In Between Hangovers, and The Lost River Review. A poem regarding the Trump inauguration will appear shortly in an anthology to be published by Poets For Sanctuary (formerly known as Poets Against Trump). Perfume River Poetry Review will soon feature a piece in an upcoming issue regarding Vietnam. His first full length book, The Moscow Poetry File, has been accepted for publication by Finishing Line Press and it will be out in October 2017. Email jhuey92@yahoo.com