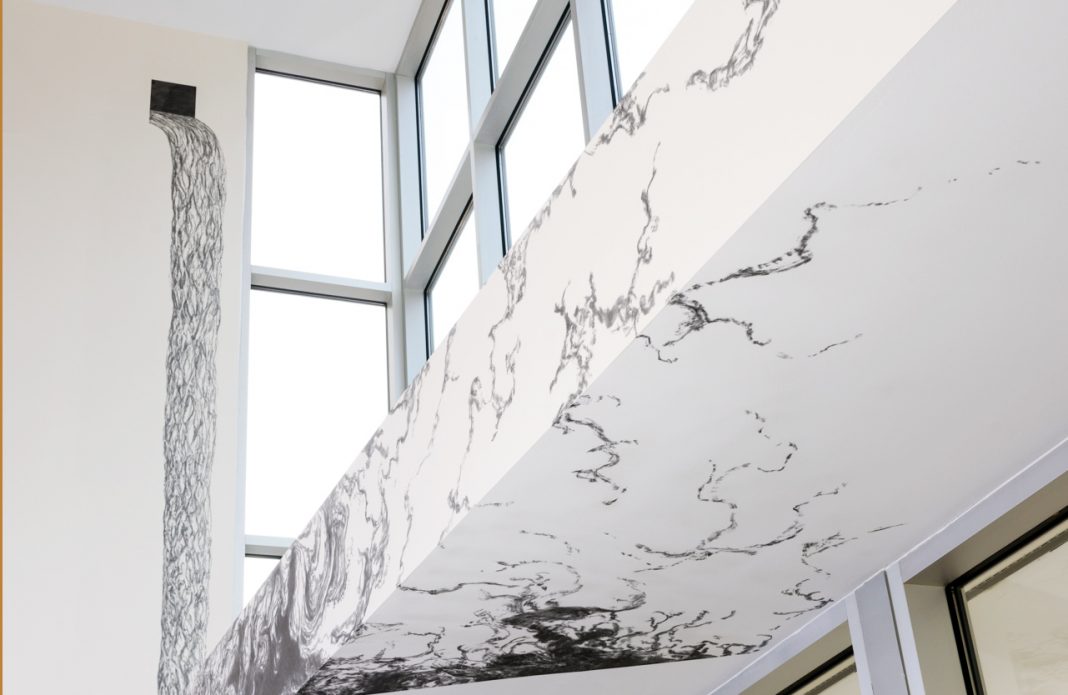 Over the last ten years I’ve made two kinds of art: paintings and site-specific wall drawings. Both use layers of marks and geometric structure inspired by the natural world and the major differences are really in how scale affects use of color, and context, but that’s a story for another time…

After months of planning and meetings with college officials, this week I installed my newest site specific work, Terminal Flux, at the Schlesinger Center at Northern Virginia Community College.

My site-specific drawings are created on location, for that specific location, and engage the architectural space they occupy. They exist only for a predetermined amount of time before they’re painted over/destroyed. There’s the creation, existence, and an eventual end to each piece.

I’m interested in the way a wall drawing can interact with a space to encourage the viewer to use that space in new ways. For instance this most recent work draws attention to a bank of windows that allow visitors to see the sky. You might in common experience of the building never even look up to notice that view.

The drawing wraps around architectural details, and never allows the viewer to experience the entire drawing from a single point of view. It requires them to piece the art together as they move through the space. This piece, Terminal Flux, was inspired by being able to work with walls that could be viewed from both the first and second floor, as well as from outside of the building (due to the large windows of the atrium where the drawing is located.) As I worked through proposal and preliminary drawings and studies I was very conscious of the fact that viewers would enter the building by walking under the drawing.

Graphite allows me to create high contrast marks on the wall but the pre-existing white of the wall carries as much, or more, of the visual weight in the drawing as the graphite. My process for applying the powdered graphite is part painting, part drawing. There is physicality to the marks on the wall that contrasts areas of open space with geometric edges – edges in the drawing and the architecture.

I’m an avid outdoorsman and that’s an apt metaphor for my creative experience installing a piece. The first morning of an install is like dropping a canoe into an unfamiliar river for an extended trip. You’re on your way and in it, and it’s a rush. There is no starting over and every second that passes you’re closer to being finished. You deal with every obstacle encountered as you reach them, and you have one chance to react. You’ve prepared as much as possible – perhaps spending months planning, visualizing, and becoming familiar with the river (or the drawing site) with photos, maps, drawings, etc. But all of that takes a back seat to being in the current, picking your route moment by moment until you get to the end. Then it’s done. It’s over until the next time, and hopefully someone took some great photos while you were focused on the task at hand.

The opening reception for Terminal Flux will be held this Saturday, February 11, 2017 from 2-4pm at the Rachel M. Schlesinger Concert Hall and Art Center, located at 4915 E. Campus Drive, Alexandria, VA and Terminal Flux will be on view through spring 2018. For more information visit their website or by contacting Gallery Director Mary Higgins. You can view more of my artwork on my website www.thefullempty.com and thanks for reading about my work.

John M. Adams was born in Hampton, Virginia and grew up in rural Gloucester, VA, surrounded by the open water and tributaries of the Chesapeake Bay. His work continues to be influenced by his passion for exploring the natural world as much as it is influenced by the structure of the urban setting where his studio is located. Adams lives in Reston, VA, and maintains a studio in Arlington, VA. Carrie Coleman Fine Art in Norfolk, VA, represents his artwork. Adams has participated in numerous solo and group exhibitions on the east coast. Currently his work is included in New Waves 2017 at the Virginia Museum of Contemporary Art in Virginia Beach and will be included East City Art’s Emulsion 2017 exhibition during March 2017 in Washington, DC. His work can be found in private, corporate, and public collections such as the Wilson Building (DC City Hall) and the DC Art Bank Collections. He has received numerous awards including a Graduate Fellowship from the Virginia Museum of Fine Arts and a Strauss Grant from the Fairfax Arts Council.