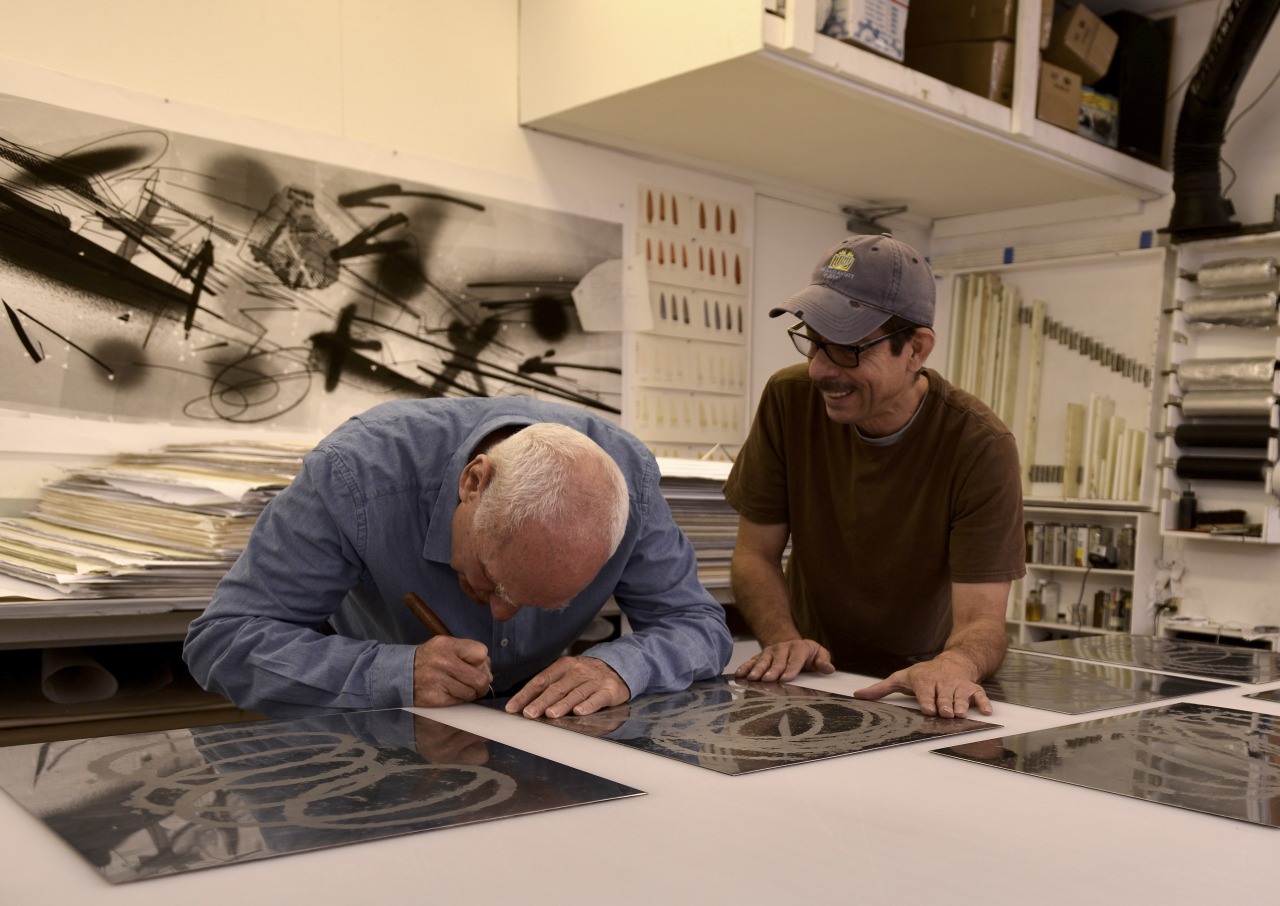 This article was selected as a finalist in the 2016 DC Student Arts Journalism Challenge, an annual competition designed to identify and support talented young arts writers. It originally appeared in The Diamondback, the University of Maryland’s independent student newspaper.

Sidney B. Felsen referred to the pivotal figures of modern art history as he would old friends, recalling crucial moments in those annals as if they’d happened yesterday.

“That’s Richard Serra stomping on it, while he’s developing a piece,” Felsen said, gesturing to a photograph of the famed sculptor tramping on a paintstick print at the Los Angeles studios of Gemini Graphic Editions Limited, which Felsen co-founded almost fifty years ago. “Actually, he’s dancing to it, is what it is. There’s music playing, and he’s jumping on it so he can get some texture.”

Speaking in a tired but assured monotone at a National Gallery of Art press preview last week, Felsen looked exactly how one expects such a consummate patron of the arts to look. He wore a pinstriped seersucker suit, Panama hat, salt-and-pepper beard, bowtie and scarf with the panache few people can pull off nowadays.

He seemed like somebody forged in a hugely interesting past but intent on unabashedly existing in the present. So it is with much of the modern art on view in this 17-artist show, which opened Sunday. The works interplay with the artists of old, but manage to look exciting and new at the same time.

And so it is with Gemini G.E.L. itself, which since 1966 has managed to evolve and innovate rather than drift into stagnation. This progress was shown by the new generation of Gemini leaders present at the preview, as well as the fact that, though this is the National Gallery’s fourth Gemini-centric show, it still manages to craft new angles on beloved artworks.

These artworks show progression in two senses: the serial sense that governs the exhibition’s curatorial theme, and the technological sense that has made Gemini so notable.

In “Bull Profile,” a six-part series by Lichtenstein, the titular Holstein becomes more and more abstract with each print. The progression from a woodblock-style print reminiscent of Albrecht Dürer to pseudo-neoplasticism recalling Piet Mondrian could be a trying one. Instead, Lichtenstein guides us through with steady hand and cheery palette, ensuring we’re comfortable as we watch him work magic.

In a set of stylized number prints, “0 through 9,” Johns uses a spectrum of color in which the top color layer of one piece becomes the middle segment in the next. Additionally, the voyage begins with the three primary colors and ends with the three secondaries.

Throughout “The Weather Series,” David Hockney references old artists to tell a pictorial story. “Rain” and “Snow” recall Japanese printmaker Katsushika Hokusai. “Mist” resembles Claude Monet’s light studies of Rouen Cathedral. “Sun” evokes the work of Johannes Vermeer — whose incomparable “Woman in Blue Reading a Letter” is on short-term loan to the Gallery until December 1. “Wind” brings all the elements together as scraps of painted paper, flying about above the Melrose Avenue sign that points toward Gemini.

The works’ technical progression through five decades of evolving printmaking at Gemini is similarly notable. Felsen explains the process: “During the proofing session at Gemini is when the artists come in and they do their creating, and it’s a time of trial and error and much experimentation. … And it’s very often that there’s a need for new materials or new processes.”

Examples of diverse media include the Serra paintstick works Felsen described or the silken Rauschenberg series on display.

“Some of the most important and influential artists of the past five decades have conceived and produced groundbreaking series, both print and sculpture, at Gemini G.E.L.,” National Gallery Director Earl Powell III said at the preview.

Felsen saw this as an honor.

“We’ve been very fortunate, and throughout the years we’ve worked with several of the most accomplished artists of our time,” Felsen said. “I think we’ve also been fortunate that a great amount of very important art has been done in the workshop that developed then to becoming a part of art history.”

The chronicle of art history presented by Gemini’s day-to-day operations attracted the National Gallery early on. And when the Gallery came knocking in 1980, Felsen said with a knowing sarcasm, “we played it cool and immediately said ‘yes.’” The Gallery’s Gemini archives were thus established.

Through the intervening years, the National Gallery has hosted four Gemini exhibitions, each expanding on the success of the previous one, drawing hundreds of thousands of visitors to see the fantastic prints.

Powell announced that some of the Gemini archive’s highlights will be part of a major exhibition next summer called “Three Centuries of American Prints.” Felsen said the prestige of being part of the National Gallery was “impossible to measure.”

“And for those of you that might remember the days of Lou Gehrig,” he said, “I want to paraphrase an expression that he made, that all of us at Gemini are some of the most fortunate people that ever existed on the face of the Earth. That’s it.”

Evan J. Berkowitz is a journalism student at the University of Maryland, where he is design editor and art critic for The Diamondback, the independent student newspaper. His writing has also appeared in Washington Life Magazine; Connections Magazine at the Peabody Essex Museum in Salem, Mass.; TeenLife Media; and The Boston Globe Green Blog. Originally from the Greater Boston area, he owes his love of art to his late grandparents, longtime PEM docents, and his writing ability to many devoted teachers at Lincoln-Sudbury Regional High School, especially Nathaniel Armistead and Timothy Jason.