I was born in 1978 in Lexington, KY, and my childhood environment didn’t value art, at least beyond the traditional macaroni necklace in elementary school art class. Through my sophomore year of college I was focused on sports, muscle cars, and girls. I actively hated art. I thought it was stupid and served absolutely no purpose at all.

In a decision that still surprises me today, during my junior year at Centre College I chose to study abroad in Strasbourg, France. Early in the semester our group traveled to Paris for a weekend. It was an incredibly hot day and in an effort to find cooler temperatures we ducked inside an interesting building. As we cooled off we began to notice that the building, and the objects it housed, was incredibly special. We had stumbled into the Musee d’Orsay.

Face to face with some of the best art in the world, I immediately “got” it. I was absorbed by Impressionist and Post-Impressionist works, specifically Monet and Van Gogh. I decided then and there that I had to become an artist. When we left the museum I found the nearest store where I could purchase a sketchbook. The rest of my time abroad was spent sketching out my first ideas while traveling across Europe in search of art museums. I felt transformed.

When I returned to school it was too late to change my major so I continued with my BS in Economics. I did take a 6-week Glassblowing course with the award-winning educator Stephen Rolfe Powell, and his class opened my eyes to the breadth of learning about Art: artists, movements, technique, theory, and more.

I graduated college in 2001 and moved to Washington, D.C. because of its relative small town feel and abundance of art museums. I set out to learn all that I could by visiting museums and art galleries and I also began to make work like crazy. I made artwork everywhere – even in my apartment stairwell and bathroom (since I didn’t have a dedicated studio space.) In 2004 many people began blogging about art and I joined in with my blog, “Thinking About Art.” Preparing and defending the reviews I posted deepened my arts practice and helped me develop a stronger eye.

My Dad was an avid woodworker and some would say that his work obviously influenced me. One time, though, when I was young, he asked me to help him in the shop by sanding some wood. I began sanding the board against the grain. When my Dad barked at me for it I threw the sanding block down and never returned to help again. So perhaps it’s fitting that for the past thirteen years my work has focused almost exclusively on the natural beauty of wood. I make non-representational paintings on hardwood and plywood. I strive to find clarity and resolution in line, color, and form, while challenging viewers’ perceptions of surface and space through simple, precise gestures on wood. My work serves to bring attention to the wood itself and I enjoy investigating the relationship between fine art and craft. I believe in craftsmanship.

My youngest son is named after my favorite artist, Anne Truitt, a prominent artist who lived in the Washington, D.C. area and whose work often incorporated wood. Her book, Daybook, gave me some needed inspiration to continue pursuing my art. In it, Anne talks about all of her responsibilities: wife, mother, home-maker, teacher, artist, etc. At the end of a long day, she might only have a little time and energy left for her work. She’d go out to her studio and paint a single coat of color on a sculpture. That would be all that she could do and it had to be enough.

With a full-time day job, wife and two very energetic little boys, I work when I can as hard as I can. At times I regret that I can’t devote more time and energy to my artwork, but then I remember Anne Truitt and the great success she had. It worked for her and it will have to work for me.

Presently, I’m continuing work on a series of paintings I call Subspaces. I began work on this series in 2010 and I’ve worked almost exclusively on it since. I’ve made over 200 pieces so far. The Subspace series is for the most part paintings executed with house paint on plywood. Rigorous, hard-edge, painted forms coexist in many of the works with natural wood grain. The forms are sometimes irregular, and often a response to what I see in the woodgrain. I frequently use the painted forms to “frame” the wood, a reversal in the frame/artwork dynamic. I’m beginning work on new paintings that will be shown later this year in my first solo show at a commercial gallery in New York City. 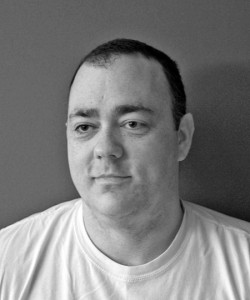 J T Kirkland has had solo exhibitions in New York, NY, Washington, D.C., Indianapolis, IN, and Richmond, VA, in addition to many curated group exhibitions across the country. In 2013, Kirkland’s work was published in New American Paintings – South Region. In 2012, he was awarded a Professional Artist Fellowship by the Virginia Museum of Fine Arts. In January 2010, Kirkland was an artist in residence at the Vermont Studio Center. Kirkland was awarded the Robert Riddick Memorial Award from the Rawls Museum, selected three-times as a semi-finalist for the Sondheim Prize for artists in the Mid-Atlantic region, and won a Cummings MFA Grant. His work was acquired by the University of Kentucky Art Museum for their permanent collection. In addition to his studio practice, Kirkland has curated numerous exhibitions, published art criticism, and served as Director of Exhibitions for a contemporary art gallery in Washington, D.C. His work is represented by Blank Space Art in New York, NY, Guthrie Contemporary in New Orleans, LA, and Adah Rose Gallery in Kensington, MD. You can see more of his work on his website here.