A year ago I quit my job as a full time art teacher to focus more on being an artist. I had been working as a full time art teacher at the high school level for ten years. Prior to that I was an adjunct art professor, and I actually stopped being a professor to take a full-time job with benefits. I was motivated to reverse course and again focus on art making after my brother’s death in September 2013. His death was un-grounding for me, and I’ve been finding recovery in the studio.

I’m the oldest of 3 children, and my brother Pierre was the middle child. Our parents met in graduate school at Columbia University and as children we moved a lot – including from Canada to France and then to the United States – for my father’s job as an engineer and sales director in the automotive industry.

When he was 15 years old my brother was diagnosed with severe ulcerative colitis and an accompanying bile duct disorder called primary sclerosing cholangitis. Five years later there were signs of pre-cancerous cells in his colon and he underwent surgery to have his colon removed. For thirteen years after that he lived a relatively normal life. He managed the remaining cholangitis, worked full-time, and eventually got married and began raising a family.

Of us three siblings Pierre was the one who could crack a joke and have everyone in the family rolling on the floor with laughter. Though my brother and I were not particularly close as kids, our relationship got closer as adults. In our thirties we had stable jobs and personal lives and were enjoying all that life had to offer.

That feeling of contentment changed when Pierre was diagnosed with bile duct cancer in November of 2011. He fought hard but succumbed in September of 2013, and his passing created a major rift in my life. I found myself turning to my art to balance my feelings of sadness, powerlessness, and uncertainty. Sometime before my brother’s death a yoga teacher told me: the feeling of being “ungrounded” is a state of freedom, with endless possibilities and choices. Since my brother’s death I’ve been meditating on that understanding in my art.

I’m inspired by the Japanese tradition of woodblock prints known as “Ukiyo-e” (which translates to “pictures from a floating world”.) Ukiyo-e prints date to the Edo period of 17-19th century Japan. The prints often depict the leisure activities of the merchant class along with landscapes, flora and fauna. There are many things that attract me to the work of Ukiyo-e masters like Utamaro, Hokusai, and Hiroshige: the flattening of space and simplification of natural forms to their essentials, the color palette, and the abundant patterns are a few that come to mind. In my most recent work I’m drawing influence from the clothing worn by geishas and samurai in Ukiyo-e. The undulating shapes of their wardrobes convey motion and capture some of my feelings of being in flux.

My newest group of pieces, The Rotation Series, all share circular shapes. The pieces often start with a spontaneous throwing or brushing of paint as I lay a loose groundwork into which I place circular shapes, which act as subjects and focal points. The pieces get more dense as I work in additional ink and paint, building up the layers as I go.

I like pieces with a lot of nuance and layering allows me to produce that. I ‘ve taken layering a step farther in the piece I just completed. Rather than have a clear subject and background, I’ve tried to create an ambiguous sense of space by having shapes recede on some edges and come forward on others and by utilizing colors with a similar saturation and value next to one another.

When I finished my MFA I went to work as an art teacher and only managed to keep making art on an inconsistent basis. Since my brother’s death I’ve spent progressively more time in the studio, and currently maintain a regular 40-hour a week studio practice.  I work out of a spare bedroom at home during the day, which leaves me evenings and weekends for my part-time jobs, household chores, and personal life.

The most important lesson I learned from my brother’s passing is that I have only one go at life. Getting back into a regular studio practice over the last year and a half has been essential to my happiness. I consider myself an artist first and foremost and my dream is to eventually be able to sustain myself off of my work. Five pieces from my Rotation Series are currently in a show at Hillyer Art Space (running from April 3-25, 2015) and you can also see one of the pieces in the upcoming Hothouse: ImPRINT show which will run from May 7 to June 20, 2015 at the Capitol Skyline Hotel. 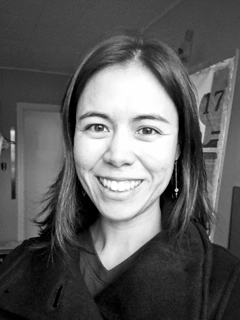 Sylvie van Helden was born in Montreal, Canada in 1974. After graduating with a Biology degree from the University of Michigan Sylvie moved to Baltimore (in 2000) to attend the Mount Royal Program at the Maryland Institute College of Art (MICA). She graduated MICA in 2002 with her MFA, and taught both at the college and high school levels for 12 years. Her works have been shown in local, regional, and national shows at venues such as Maryland Art Place, The Elizabeth Roberts Gallery, Eastern Michigan University, and the Painting Center in NYC. She was the recipient of a Maryland States Arts Council grant for Painting in 2004. Sylvie lives and works in Baltimore, MD.

View the artist’s website here. The image at the top of the post is a detail from the author’s artwork, ‘Rotation 7 – Suspension’ (2015). This article was produced with the support of the DC Commission on the Arts and Humanities within a partnership between Day Eight and the Washington Project for the Arts.