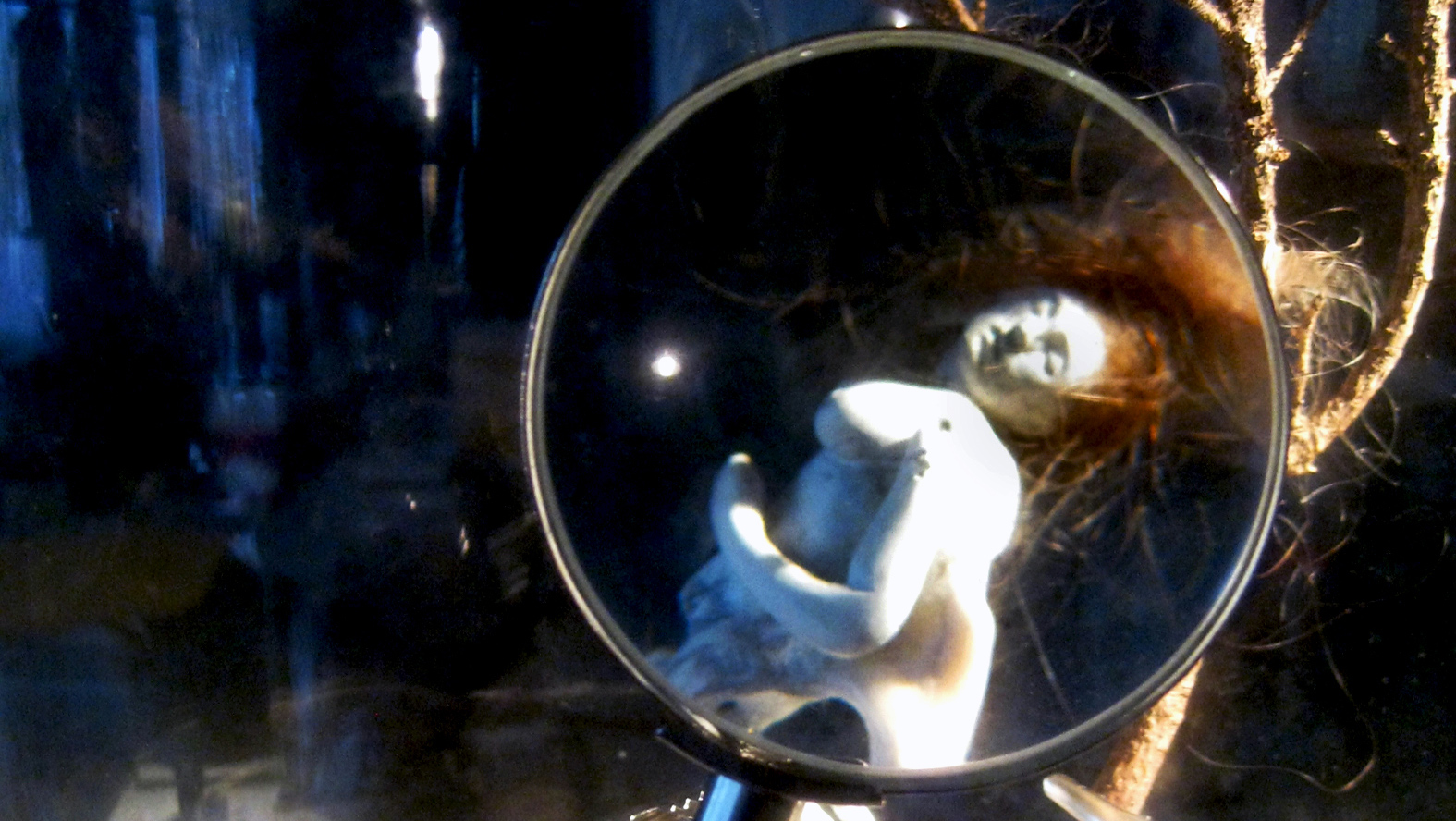 For several years I’ve been making my own kind of music boxes with sculpted miniature puppets and custom made music box works. I’m a professor of photography at James Madison University but over the last decade my interest as an artist has shifted away from the camera made image. In a way, my music boxes aren’t such a change from photography; the camera is a kind of tiny room with a window (lens) that focuses the world down onto a miniature scale.

One of my most cherished possessions is a small, old, glass-domed music box. Inside the box is a captive little ballerina who performs a sleepy dance of jumps and turns to the mechanical tune of the music box, which is concealed under a palm-sized round stage. When I was a child part of the allure of this novelty was that it belonged to my sister. This did not stop me from trying to smash it open by pounding it against the floor when I was three years old. The dome, which is now cloudy with age, also bears the bruises and splits from my later attempts to liberate the delicate and perfect little human serenely trapped inside. Years later my sister allowed me to take possession of our childhood prize and to this day I am fascinated and delighted by it. Many influences have led me to the work I’m creating now, but the uncanny anima of this particular treasure has never faded for me. I hope to create something that will make the viewer wild with the kind of fascination and longing my childhood music box inspired in me. I’m currently on my fifth try, and each box is inspired by a piece of music.

I’m not a good singer but when my daughter was born I bought a compact disc of traditional lullabies so I could learn to sing to my baby the way my grandmother once sang to me. My current music box is based on one of the songs on that CD, a ballad called In the Pines. Back in 2010 I wrote this passage from the lyrics of In the Pines into my journal: “Black girl, black girl don’t lie to me. Tell me where did you stay last night? In the pines, in the pines, where the sun never shines. And I shivered the whole night through.” My absolute favorite line is, “The very last words you said to me were sing me one more song”, because of the intimacy and finality it conveys and the way it resonates with how miniatures are worlds inside of worlds.

The actual music box works are custom made by a company in Vermont from 18 note musical arrangements. My brother in law, who is a musical director in New York City, did the arrangement for the Pines, and for the past couple of months I’ve been fabricating the miniature puppet. The main character of the song is a sort of shadow and the song’s narrative includes her going missing for some time. The bone that makes up the torso of her figure is possibly the channel from the ear of the same animal skull (likely a possum) I have used for several of my puppets. The shape of this particular fragment of bone allows the figure to wrap around and become the trunk of a pine tree. The sculpting is on an almost micro scale, and it’s slow going. I’ve probably spent about twenty hours so far, and it will likely take another forty to complete just the central figure.

I’ll use a micro spot to internally light the scene, and I envision this completing as a forced perspective depicting a pine woods stage. The music box works will make the central tree rotate, one full slow rotation corresponding to the heart-breaking phrase of music from In the Pines. The puppet will both be part of and appear to be hidden in the turning tree.

I was born in Washington DC and have lived in Virginia most of my life. The house where I tried to smash open the music box was my grandparent’s house on Mansion Drive in Alexandria, Virginia. My grandmother rescued the box and put it up on a high shelf, mercifully keeping me from destroying it altogether.

In contrast to my maternal grandparent’s house on Mansion Drive, my paternal grandmother was an artist who built her own house in Montgomery County Maryland for a few thousand dollars. It is the quirkiest house with the most incredible handmade details you can possibly imagine: a mosaic wall in one bathroom made from found and melted glass depicting an underwater scene, hand carved art nouveau-esque door trim (a result of wood that cracked while being nailed up: the design conceals the fissure) and several low-relief concrete scenes rendered on interior and exterior walls.

I’m fortunate to have found an equally unusual home and workspace: a formerly abandoned elementary school in Louisa County, Virginia. The entire place is a sort of raw studio but my official studio is the old second grade classroom. My life is full of commitments, including teaching, running a gallery, and as parent of one wonderful daughter. I’m grateful for the time and energy I find to focus into my music boxes, and hope you’ll come see my work in the upcoming Hothouse: imPRINT exhibit. 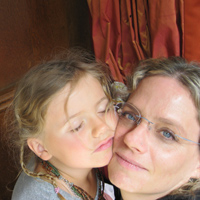 Rebecca Silberman teaches all manner of traditional photography, ranging from 19th Century techniques through large format to instant film transfers and lifts at James Madison University. Her special areas of interest include handmade sensitizers, low-tech adaptations, miniatures, optics and illusions. She is also the director of The New Image Gallery, a photo dedicated exhibition space at James Madison University. She holds an MFA in Graphics (photography, printmaking and drawing) from Bowling Green State University in Ohio.

The image at the top of the post is a detail from the author’s artwork, ‘Trespasser’ (2012).