Hairy Confrontations: a review of Sonya Clark’s solo show at Contemporary Wing, AHEAD OF HAIR by Roxanne Goldberg 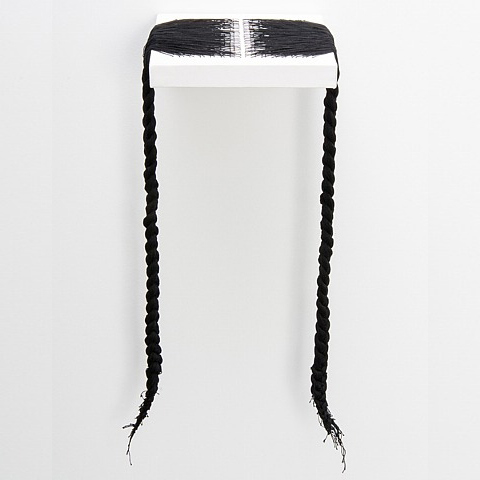 Hair. It’s chaotic, it’s ordered. Clean and messy, it is a sense of frustration and joy.

In Sonya Clark’s solo exhibition at Contemporary Wing, AHEAD OF HAIR, Clark uses hair as a medium to represent race, class and culture.

“I’ve been combing hair since I was a child,” said Clark who has been working with hair as a medium in both hairdressing and fine art for over twenty years.

One of Clark’s more recent works, Pigtails, is evocative of youth. Resting on a wall-mounted shelf, a young girl’s braided pigtails are woven from tactile black thread. Though the work suggests innocence, a hairstyle removed from the human head challenges the viewer to consider the means in which a young woman’s hair was taken. When hair is so deeply attached to one’s personal identity, a hairstyle without an owner begins to lose its character, lose its playfulness, and becomes limp and empty. The effect is intensified when the viewer must look down at the work. Mounted at hip-height, the object’s relationship to the viewer shifts from passive to active, as one feels implicated and responsible for subjugating the hair and its anonymous human counterpart.

The emotions evoked by the oldest work in the show, dating from 2003, complement with the powerful notion of stolen youth in Pigtails. Long Hair confronts the viewer with age. The brilliant, life-like digital print of a single dread lock is rich with depth and texture. The viewer cannot help but to yearn to reach out, to touch the hair fibers clearly pulsating with life. Astonishment and disappointment converge when the illusion is realized. 30 feet long, the print work represents the length of a dread grown for 30 years.

“At first, I thought it was strange to use someone’s DNA and then sell it, with the history of selling bodies in this country,” said Clark who is inspired by the infinite hairstyles that became available to black women after the Africa Diaspora.

Unbreakable fashions together black fine-toothed combs branded “Unbreakable” in a composition that is inherently broken. The moderate-sized work demands the viewer to consider the societal and cultural pressures associated with issues of straight hair. Cotton to hair is immediately recognized as an object of relegated beauty—flowers tinged with bronze are forever preserved behind glass. However, the work with antique undertones quickly becomes mystifying and somewhat uneasy, when one considers the implications of merging cotton and African American hair. The ties to slavery are inescapable and uncanny.

Though the subject matter in AHEAD OF HAIR compels the viewer to engage in dialogue, and to contemplate one’s personal notions of race, class and culture, the work would not be as emotive or successful without Clark’s extraordinary craftsmanship and fine attention to detail.

To execute Quadroon, Clark revitalized the 1990s art of stitching, by fashioning cornrows into one fourth of a square canvas. The other three quadrants contain a heavy mass of thread, stitched together to resemble dense, straight, hair fibers. The cornrows and straight threads are pulled together at the very center of the work, forming a ponytail that extends and cascades naturally into the viewer’s immediate space.

Quadroon is exemplary of Clark’s extraordinary ability to deeply engage with her subject, while maintaining exceptional hold on her medium and craft. A reference to race classification, Quadroon has roots in an experience traveling through Ghana, where Clark, an African-American, was called “bruni,” the Ghanaian word for a white person. Clark explained that in the context of African culture, because Clark has a white grandparent, she is considered white, whereas in the United States, Clark being three-quarters African American, is considered black.

As Clark said, “I’m the same color in either place but the context is different.”

Albers Study captures this question within an art historical narrative, using Josef Alber’s canonic text on color theory, to take five colors and make them appear as six. Clark achieves her desired effect by wrapping colored thread around the individual teeth of “Unbreakable” combs, creating compositions that resemble Alber’s Homage to the Square. Hanging on the wall opposite the gallery entrance, Albers Study underscores each unique work in Clark’s exhibition. Designed to elevate her signature stitch from craft to fine art, the smallest works in the exhibition validate the artist’s grandest statement: “Hair holds the place where race resides.” 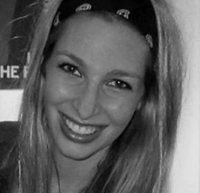 Roxanne Goldberg is a rising third-year art history student at The George Washington University, where she is a Curator and the Public Relations Director for the student-led arts gallery, Gallery 102. Roxanne has interned at the Hirshhorn Museum and Sculpture Garden and International Arts & Artists. She currently enjoys her position as a Creative Writer for ArtSeeDC. After graduation, Roxanne aspires to earn a Ph.D. in art history and dreams of one day writing arts criticism for the New York Times.