The Body as Concept and Constant by Judy Byron 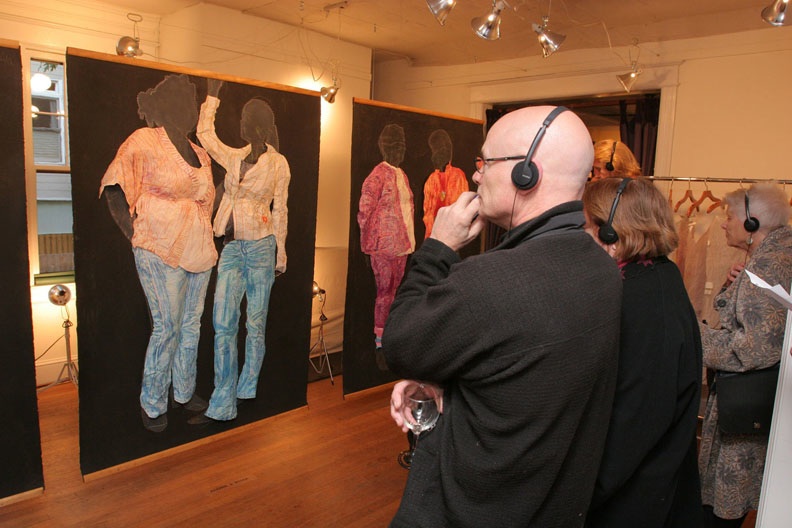 As 2011 begins, I find myself re-visiting some professional pleasures of 2010 and realizing that this all seems very far away from being the girl who was raised to marry her boss and clean house.  Growing up in a home where girls didn’t go to college, I catapulted myself out of my family and into adult life as a drama major immersed in the philosophy of Stanislavski and Method Acting.  While in college I realized that visual arts is my voice and at the same time came to an activist awakening that brought me rich life lessons as an organizer for Eugene McCarthy’s anti-war presidential primary campaign, and Cesar Chavez’s Consumer Grape Boycott in 1968. 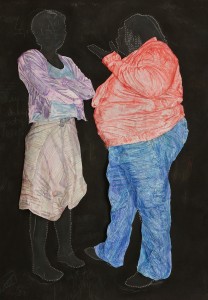 My work is still informed by my undergraduate studies and my experiences as a community organizer, now reinforced by the performance art of the 70’s (particularly feminist artists Suzanne Lacy and Eleanor Antin.)  As an artist and activist, through my works on paper, my installations, and artist books, I explore the power of the female figure and voice to express aspects of identity, while affirming the connections between art and society.

Until ten years ago, I worked primarily in community and commissioned public art, displaying life-sized woodcut rubbings of individuals and groups in locations relevant to the subjects. Now, continuing to embrace Method Acting’s belief in the constant dynamism of one’s inner and outer life, I draw to express through body language and clothing what each of my female subjects has brought to a moment in time. Wetting and fitting handmade paper to the subject, I create life-sized, softly cast 3-D drawings that references the figure without disclosing identity. Attached to lighted silhouette backgrounds, these shaped clothing pieces, with audio accompaniments, are intended as mirrors into one’s self and as conveyors of our shared humanity.

The first two installations of the series were Where I Live and What Matters.  Where I Live referred simultaneously to the site of the exhibition, to the location of each person’s identity, and to the source of my own creative exploration. What Matters continued my exploration of creative voice in both personal and political contexts by incorporating audio for the first time. These series allow me to continue to combine my love of drawing with my passionate interest in issues of identity. They also allow me to integrate lessons from community organizing, allowing me to engage larger social questions by hosting salons and evenings of conversation in my home studio as part of the work’s display. 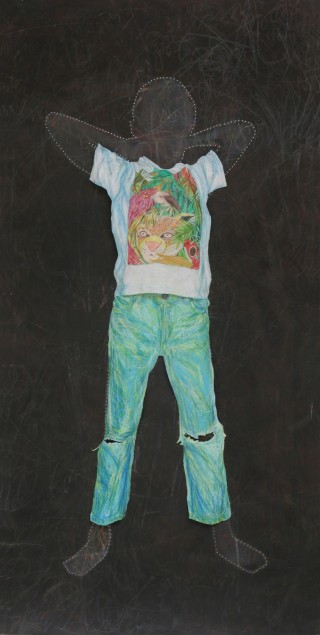 Perfect Girls, the next installation in the series, opens in April 2011 and continues the use of my own self–reflection as the catalyst for creating work within a larger cultural context. This time, I will consider the “perfect girl” as a paradigm of our society. Drawings of my own coming of age in the 1950s and those of a 16 year old girl whom I have drawn at ages 5, 8, 13, and 16 (Naomi) will be displayed with audio collected from “Conversation Dinners” I hosted, and from Naomi herself, who has kept an audio journal.

Continental Drift will complete the series by considering identity through the cultures of other countries and the drifting influence between these cultures and the United States.  I began work on this project by traveling to Brazil in January 2010, where I photographed details from sidewalks, toys, products, netting, foliage, clothing and detritus.  I will travel to China and to Ghana to collect visual textures from those continents and these particular countries whose people have immigrated in large numbers to the US. These images will influence large color pencil drawings inspired by each country’s textures, and will allow me to work with women who have emigrated here.  Continental Drift is scheduled for exhibition at American University Museum at the Katzen Center in late 2012 or early 2013.

Looking back, I realize that the threads that launched me from adolescence – community organizing, theatre, visual arts and feminism have stayed as my constants.  Looking forward, I welcome their continued impact on my artistic growth and creative evolution.  And I realize I keep a pretty clean house. 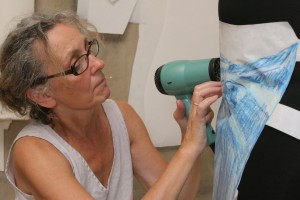 Judy Byron studied theatre at Ithaca College and art at the Corcoran School of Art and Design. Her work on paper has been recognized by the National Endowment for the Arts, the Mid-Atlantic Arts Foundation and the DC Commission on the Arts and Humanities. Her permanent public works hang at sites including the School of Social Work in the Tate Turner Kuralt Building at UNC Chapel Hill, Service Employees International Union and the Urban Institute.

Byron’s solo exhibitions include “Artists + Communities” at the National Museum of Women in the Arts. She has participated in many group exhibitions, such as “Picturing Politics”, “Art Against AIDS”, and  “Sweet Sixteen”. Byron’s work is part of the Brooklyn Museum’s Elizabeth Sackler Center Feminist Artist Base. Collections include the Corcoran Museum, the NMWA, the Library of Congress, Rutgers University, the U.S. Embassy in Bogota, Columbia and Absolut Vodka. She is included in 100 DC Artists edited by Lenny Campello(Schiffer June 2011).

Byron founded CAMP, an Artist Mentorship Program for the Corcoran Museum of Art, which was honored as a national model by the NEA and the President’s Commission on Arts and Humanities. She will complete her clothing series with “Perfect Girls” followed by “Continental Drift”.