Imagery and Symbolism by Matt Sesow 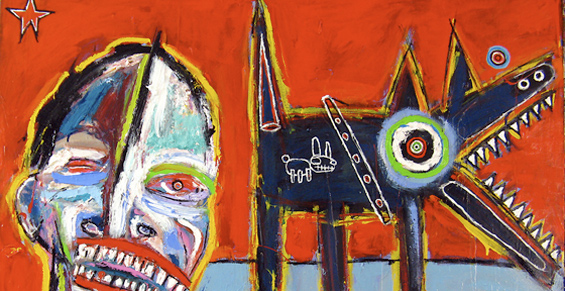 Since 1994, I have used a unique set of “icons” and imagery to help communicate meaning in my paintings. Below are my explanations for how these “visual clues” might be used to help people better understand the story and intention of my work.

The bunny is a bit of ‘self portrait’ icon. It relates to my intent not to harm others, although a ‘violent’ or unsettled darkness exists within me, as I suppose it does with others, which conveniently might help explain the other things going on around most of my bunnies in several of the paintings. The bunny’s mouth is often presented to resemble my ‘trauma scar’ icon. It’s a nod to the fact that I ‘talk about it’ and that I paint feelings related to trauma and how they might relate to innocence/childhood.

The trauma scar is a reminder icon. Having experienced a series of surgeries as a child following the accident which claimed my left hand, I continue to remember one surgery in particular which left a scar, still visible, on my left arm, and which resulted in a line with three dashes. It was quite painful… to this day, pressure or a blow to the scar causes pain.

My favorite color is ‘soviet red’… a nod to the intensity of the propaganda posters used during the cold war, that’s why the lips have to be pure red. When I started painting, I was frustrated by the static nature of paintings. By using slashing lines and ‘punching the painting’ I try to get motion and emotion. By using huge lips, and long rows of teeth, I want the viewer to see or guess if there is a smile, a frown, a grimace, yelling, screaming, reaction. Emotion.

For my paintings, the airplane has represented evil. It is the ‘great amputator’, the bomber, the one that destroys summer evenings. It usually shows up when I ‘paint by remembers’ and when trying to make a statement about one of the many aggressive actions countries with power take against innocent civilians.

Like many, I see the eyes as a pathway to the soul, the ‘tell no lies’ part of everybody.

I use eye color to help tell the story of my subject. Two orange is evil or aggressive, two blue is innocent or ignorant, one blue and one orange is balanced. A mix of blue and orange on each pupil represents a sort of ‘self actualization’ or complexity/mystery. One eye hidden or closed produces the same effect.

The phoenix represents my current state of mind while creating the painting, or the state of mind of the person(s) in the painting. It is a barometer of mental state If the phoenix/bird is pointing down, that signifies depression, failure or self-loathing… that I must try harder. If the phoenix/bird is pointed horizontally, it signifies a confidence in self without need or desire to change or challenge; however, there is no struggle and thus not much artistic growth. A rising or a declining phoenix is the best for good art and means that I am being challenged.

This star is associated with the business model I use for the sale and marketing of my paintings. It is my nod to the socialist polity. The idea is that original paintings (not prints) are for the masses, for the people, not just a select few within the bourgeois.

I began to embrace and develop the bull symbol while preparing for my first solo exhibition in Europe. I realized that rather than being a bunny, I needed to be a bull. A controlled bull. I needed confidence and strength. The bull is smiling. He is nice. You won’t eat him and he won’t attack you. But he is very strong, confident, and he oftentimes has a bunny, a rising phoenix, a trauma cup, or a star inside to keep him honest and to make him remember and remain slightly vulnerable.

‘The dogs’ are a result of a multitude of influences. First, they associate comfortably with the tag I had been given at the early part of my art career as a folk or outsider artist: they are crude, colorful, and loud. The primary influence of my dog paintings was birthed while I was at my first artist residency, in Ciudad Colon, Costa Rica (2003). The residency was inspirational; I painted over 100 works, but the largest influence was the ‘interruption’ of other artists, interested tourists, and the constant barking dogs. So ‘folk art dogs’, are representative and dedicated to artists being asked to create ‘on demand’ and in non-familiar surroundings…. with the best intentions.

Editor’s Note: This piece is excerpted from a longer piece originally published by Matt on his website. Click here to read the entire piece on his site. To see more of Matt Sesow’s painting, click here. To see his bio on his site, click here.

Top image in this post is Sesow’s ‘Scoundrel’. Originally published on Bourgeon May 12, 2010