Arias with a Twist by Alex Leidy 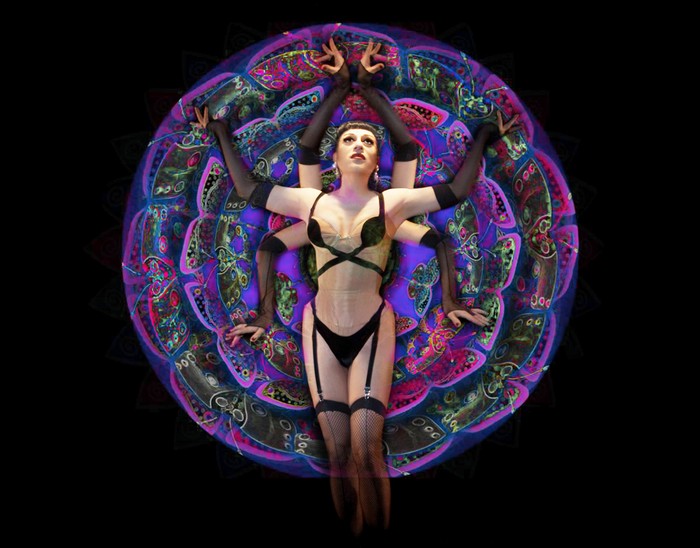 Watching Arias with a Twist, I was reminded of nothing so much as the iconic Looney Toons short “Duck Amuck.” For those unfamiliar with it, the short involves Daffy Duck being tormented by a capricious cartoonist who keeps redrawing the landscape to put him in ever-stranger situations. With a little tweaking, this works as a pretty accurate summation of Arias with a Twist – here, drag queen Joey Arias plays Daffy Duck role, while Obie Award-winning puppeteer Basil Twist is the cartoonist constantly reshaping the world around Arias. Twist, represented by the six puppeteers who bring his vision to life, is never seen until the very end of the production, but his presence is inescapable; it’s evident in every aspect of the imaginative set pieces which Arias is placed into, which incorporate puppets, sets, and projections to create a number of richly visual fantasy worlds on stage. Twist’s bottomless imagination has Joey Arias abducted by aliens, sent to Hell, and rampaging through New York like a glamorous Godzilla, just to name a few of the best set pieces in the show. For Arias’ part, he gamely sings his way through the various transformations of the world around him, doing numbers by Led Zepplin, Billie Holiday, and the Beatles, among others, but despite getting first billing in the title, Arias with a Twist is much more Basil Twist’s show than Joey Arias’.

Arias is being presented at Woolly Mammoth as part of the Basil Twist retrospective playing at theatres across DC, and the show bears all of the hallmarks of his unique brand of puppetry. Over the past ten years, Twist has become one of the best-known puppet artists in the United States with an abstract, non-narrative approach to the art form that can be seen in all of the shows that were a part of the Twist retrospective.

Even Petrushka, his fairly literal interpretation of Stravinsky’s ballet, begins with what Twist describes as “an abstract fantasia” where shapes move and swirl in time to the composer’s “Sonata for Two Pianos.” The phrase “abstract fantasia” does a great job of capturing the feel of one of Twist’s original pieces, which thrive on a rich sense of spectacle and whimsy in a way more commonly associated with films – especially animation – than with theatre. Considered amongst the rest of his shows, Arias With a Twist is absolutely a Basil Twist production. There’s a bit of token narrative through line, but it’s mostly a surreal collage of lush set pieces that seamlessly transition into each other with the aid of shifting fabric backdrops and projections. The puppets are simply incredible in both their beauty and their variety.

Dancing demons, octopus tentacles, and a swing band comprised of gorgeous marionettes from the 1930s are only a few of the visual treats on offer – I don’t want to give away too much, as the reveals of each new puppet provide some of the best surprises of the show. All of the puppeteers in Arias deserve a lot of credit for the work they do in making Basil Twist’s fantasy worlds a reality; their performances, while invisible, are what make Arias with a Twist truly incredible to watch.

What about Joey Arias, the titular star who is the only visible performer for almost the entire show? Unfortunately, he’s the weak link in this collaboration – which is not to say that he’s a bad performer. Joey Arias has a powerful voice, and a lot of the jazzier songs he sings are beautiful. He can whip out a flawless Billie Holliday on a whim, and a slowed-down take on “All By Myself” that he sings midway through the show was close to being a showstopper. However, when his songs drift towards the rock end of the spectrum, the charm of Arias’ singing starts to run out. A Beatles medley he sings during a trip on magic mushrooms ultimately misses the psychedelic charm of the original songs, and the rendition of Led Zepplin’s “Kashmir” he opened the show with was just shy of being uncomfortably screechy. If those two numbers had been all that hindered Arias’ performance it honestly wouldn’t have been that big a deal, but the dialogue also left a lot to be desired. I’m not sure if it’s fair to pin that on Joey Arias – I don’t know if he wrote the dialogue or if it was in collaboration with Basil Twist or another artist – but the show’s weakest moments took place when Joey Arias was just talking to himself. I just didn’t think any of the jokes were funny. The sense of humor seemed to be placed pretty firmly on a middle school level, mostly consisting of Arias doing something sexual while radiating an air of “gosh, I’m just so transgressive.” It’s a lot like the early seasons of South Park before the creators started seeing dick jokes as a means to an end rather than an end in themselves. I personally that sense of humor in small doses, but it was a lot to take for an hour and a half.

Ultimately, this comes down to personal taste more than anything; if your idea of a killer joke consists entirely of someone making a sexual gesture and acting like they’ve blown your mind, then Arias with a Twist just might be a laugh riot.

When all’s said and done, the weak songs and dialogue aren’t enough to weigh down the incredible visual spectacle of Arias with a Twist, and those things are subjective enough that any criticism of them should be taken with a grain of salt. This is a beautiful show that’s absolutely worth seeing, but its problems are just serious enough that they get in the way of it being a really amazing piece. I do hope that Basil Twist and Joey Arias don’t just rest on their laurels with this one, because with some tweaks and edits they could go a long way towards making the piece truly unforgettable instead of just great.

Alex Leidy is a junior theater major at the University of Maryland.