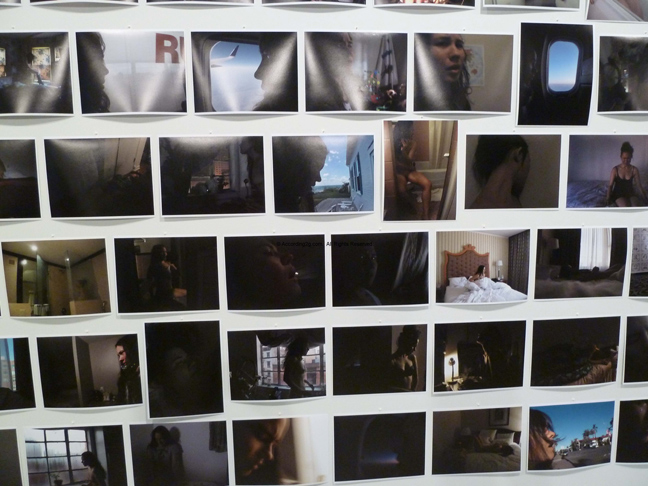 It’s Laurel Nakadate’s party, and she’ll cry if she wants to.

In an acknowledgement to loneliness, Nakadate’s photography exhibition “365 Days: A Catalogue of Tears” chronicles images captured over a one-year span of everyday crying. The Brooklyn, N.Y., native’s pictures are part of the Podestra Collection, which has been touring the States. The Katzen Arts Center at American University will be displaying 283 of the 365 photographs from Sept. 3 to Dec. 14.

The inspiration for the project came from social networking websites such as Facebook, and the constant portrayal of happiness shown through pictures and status updates. Instead, Nakadate took part in one year of constant sadness. The project started Jan. 1, 2010, and was completed Dec. 31, 2010.

For the project, Nakadate rented hotel rooms for one hour at a time where she devoted herself to crying. Most of the pictures in her collection include images taken in these hotel rooms, as well as some taken on airplanes and outdoors as she traveled around the U.S. Characterized by dark shadowed tones and oftentimes nudity, Nakadate’s photos also vividly portray feelings of alienation and the vulnerability of the young human body. Although the entire collection could not fit on the walls of the Katzen Arts Center, the exhibit is still daunting. At first glance the photographs seem overwhelming, as the images line the walls one after another and reach the high ceilings of the museum.

Nakadate’s provocative pictures include the young woman crying in front of a mirror, staring longingly out of a hotel window and even laying naked on the shore of a river. No picture in the collection is the same, but each portrays sorrow in a different and cohesive way. Overall, the exhibit leaves one feeling a little uncomfortable. The images of Nakadate are visually striking, but an entire room packed floor to ceiling with complete sadness is not exactly heartwarming — but that is the point.

Although the exhibit may come off as strange and discomforting, that is the goal of Nakadate’s work. Why should something as natural as nudity and sadness make people so uncomfortable?  These emotions are a major aspect of human life, but social networking sites have evolved to completely ignore these feelings. Nakadate’s photography exhibition takes a stand against all of this. If people refuse to put these kinds of pictures of Facebook, fill a whole room with them.

“365 Days: A Catalogue of Tears” is a creative collection. Although out of the ordinary, Nakadate’s work shows a thought-provoking stance on loneliness. When visitors leave feeling uncomfortable and ask themselves why, it is proof that the exhibition did its job.

Do not go to this exhibit for happiness and laughs. But, if you are looking for a unique and inspiring outlook on the social world, this is a great exhibit to visit.

Kendall Breitman is a current junior at American University.  Originally from Havertown, Pennsylvania, Kendall is in DC studying pre-law and print journalism.  She is also the assistant editor for the University’s newspaper, The Eagle.