I began thinking about the new dance/theater I’m making while recovering from a double knee replacement surgery in July, 2011. I had to spend a lot of time recovering in stillness, “not doing” stuff”, and the work is entitled “Silence is as varied as snow.”

I was interested in starting the composition from that place of quiet – with lack of expectation or preconceived idea of where we were going. When I began meeting with my company members (musicians and dancers) after the four month break (because of the surgery) we talked about silence/sound and stillness/motion.

Of course the musicians had thought a great deal about silence so they had a lot to say right of the bat. We looked at the writing of John Cage:

“Our intention is to affirm this life, not to bring order out of a chaos or to suggest improvements in creation, but simply to wake up to the very life we’re living, which is so excellent once one gets one’s mind and one’s desires out of its way and lets it act of its own accord.”

I felt this rule of thumb from Cage was a very good beginning for our new collaboration. Dancer Ken Manheimer suggested an improvisation in which the dancers moved to the sound inherent in silence and that was how we began rehearsing. I was determined to stick with letting the dance flow from what was happening in the moment and not try to “pre-conceive and pre arrange.” I follow the observations of scientist Michael S. Gazzaniga who wrote, “You’re just trying whatever it is you’re trying; you don’t know what’s going to happen, and then whoosh! —the thing pours right out there and generates the next questions, questions you never would have thought of before.” 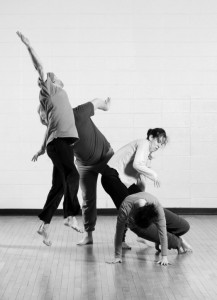 At one point the dancers were doing something and the musicians started to pack up their instruments to leave and whispered together upstage of the dancers as they left. I loved the whispering, knowing it said something about sound and silence in an unexpected way, and we’ve kept “whispering groups” as a part of the choreography. There are sections of ideas about sound/silence, movement/stillness.

Since my surgery, I’ve been able to move more and more freely. It has been a wonderful feeling after years of increasing physical limitation. I can plie, jog, move quickly and even jump a little. Several people have assumed that I would perform again but I’ve not been driven to perform in recent years; I’m much more a director of dancers. I love to see the moving body. Can’t get enough of it. It’s an addiction. The most satisfying experiences I’ve had as a performer have been doing solos of someone else’s choreography, someone who can coach me to look good. The last solo I performed was Andy Torres’ “sparrow”. The great part of being in Andy’s work was to just follow his direction and trust him. It’s a marvelous feeling for someone who is usually the director. I try to bring my dancer’s sensibility to my choreography.

I hope you’ll come enjoy the first performances of this piece next weekend at Woolly Mammoth Theater as part of the Jane Franklin Company’s 24-Hour Dance Project.

Nancy Havlik has directed and choreographed for the past 25 years. She formed Dance Performance Group (a non profit 501c3 corporation) in 1989 as a vehicle to explore her own choreographic ideas with a small group of dancers and musicians. Through the Company her choreography has been performed extensively in the Washington, DC area at venues including Dance Place, Joy of Motion, Montgomery College, Jewish Community Center, Joe’s Movement Emporium, Mt. Vernon College and the Kennedy Center Millennium Stage. Her work has been shown in New York City at Joyce Soho, WAX and the Construction Company and in in Eastern Europe. (Czech Republic and Slovakia). She has directed site work performances all over the Washington, DC area in places as varied as C& O Canal, the Building Museum, Barnes and Noble Bookstore, Josephine Butler Center and the Torpedo Factory Arts Center. She participated in the Capital Fringe Festival for 3 years and recently has presented performances at Flashpoint Mead Theatre and at Woolly Mammoth Melton Rehearsal Hall. She has received grants from Maryland State Arts Council, the Montgomery County Arts Council and the DC Commission on the Arts and Humanities. Nancy teaches creative movement and intergenerational workshops for older adults through Arts for the Aging (AFTA). Her AFTA program “Moving Art” has received a 2011 Met Life grant to present a series of workshops for older adults in collaboration with Donna McKay combing visual art and creative movement. Nancy also directs Quicksilver, an improvisational performance company of dancers over 60 years of age under the auspices of AFTA.

Making Maps for an Unknowable but Improvable Present by Karey Kessler