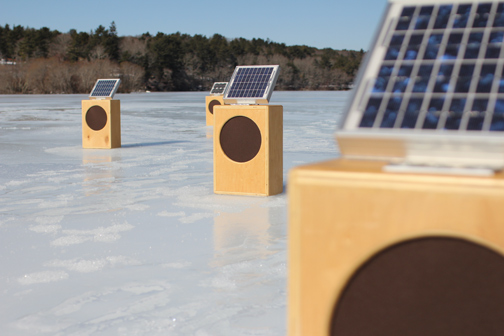 In November of 2008 my good friend David Sanchez Burr called me up and said, “Yo! Make something solar. We’re going to the desert.” Then he hung up. In June of 2009 Dave and I went to Ryholite Nevada with Richard Vosseller. We had a residency at The Goldwell Open Air Museum and created Off The Grid. The idea was to make art using sustainable energy. Sun Boxes was my contribution. Although I cite Dave as the main catalyst, the truth is I’ve been thinking about this for a long time.

When on tour with China Pig back in 1995, I remember looking out the window and I saw a field of fireflies. It was pretty beautiful, but what was so memorable, was being able to get a sense of the depth of the field. Some of the fireflies were closer than others and I got a sense of a chunk of space. In a way Sun Boxes is a sonic version of that field of fireflies. Sun Boxes is a solar powered sound installation. It’s comprised of twenty speakers operating independently, each powered by the sun via solar panels. Inside each Sun Box is a PC board that has a recorded guitar note loaded and programmed to play continuously in a loop. These guitar notes collectively make a Bb chord. Because the loops are different in length, once the piece begins they continually overlap and the piece slowly evolves over time.

I played in a lot of bands and have spent a lot of time playing on stage. Although it was all great, I really wanted to make something people could feel like they were part of physically. There is no stage with Sun Boxes, once you see it or hear you’re in it, you decide how far in to go. One of my favorite details about Sun Boxes is to be surrounded by the piece.

The piece creates space; it’s an environment for one to enter and exit. The footprint this environment occupies is similar to that of a city. A metropolis. It’s a burst of technology in the middle of nature. Unlike most cities I have been to, it does not just take over the space. Rather Sun Boxes interfaces with the environment and collaborates with nature. It is the perfect combination of technology and nature that create art, an environment, and a metropolis.

There are no batteries involved, so Sun Boxes are reliant on the sun. When the sun sets the music stops and doesn’t start until the sun rises. The piece changes as the length of the day changes. Since the amount of sunlight varies from day to day so does the composition of Sun Boxes. Participants are encouraged to walk amongst the speakers, and surround themselves with the piece. Certain speakers will be closer and, therefore, louder so the piece will sound different to different people in different positions throughout the array. Allowing the audience to move around the piece will create a unique experience for everyone. Participants are encouraged to wander through the speakers, which will alter the composition as they move. Given the option two people will take different paths through the array and hear the composition differently. Sun Boxes is not just one composition, but, many. Sun Boxes is a system that really interacts with its environment. 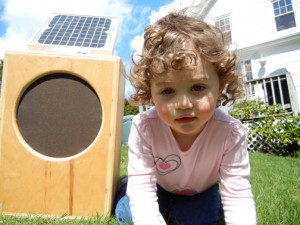 We are all reliant on the sun. I think it is refreshing to be reminded of this. I live on the South Shore of Boston in a town called Hingham. I live with a wife and two cats. We are one mile from the ocean. Our lives have filled up with technology. But we still need the sun and so does Sun Boxes. Karlheinze Stockhausen once said “using Short-wave radios in pieces was like improvising with the world.” Similarly The Sun Boxes are collaborating with the planet and it’s relation to the sun.

So far Sun Boxes has been In Nevada, Massachusetts, Indiana, Connecticut, Ohio, New Hampshire, Vermont, and Maine. More importantly, Sun Boxes has been in the desert, on a frozen pond, grassy plains, a parking lot, the beach, in the snow and on a mountain. I have an informal goal to bring Sun Boxes to every state, and a more formal goal to seek out different locations.