Black on Black: Rothko’s Re-Imagining of Color by Sarah Amos 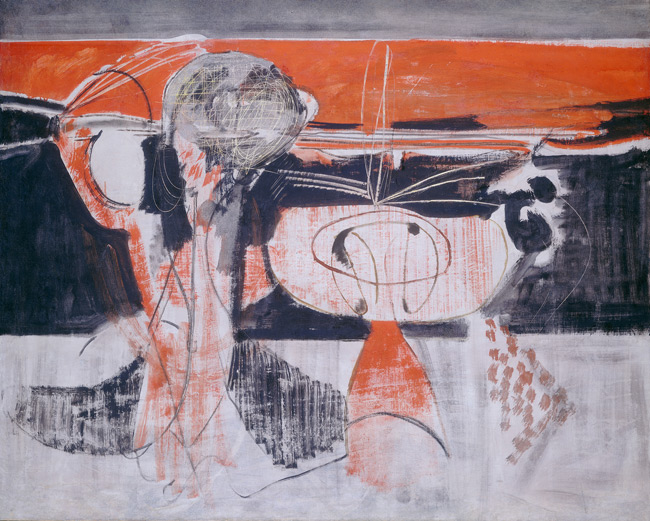 Artists and physicists may argue whether or not black is a color, a shade or even the absolute absence of color itself. But the iconic artist Mark Rothko doesn’t see black as any of these single, narrow definitions.

Such is the theme of “In the Tower: Mark Rothko,” now showing at the National Gallery of Art. A small collection of works spanning his career are on display: Each prominently utilizes blackness, whether as merely an accent or as a vehicle to explore the vast potentiality of the anti-color.

Rothko, labeled an abstract expressionist, is probably best known for his great canvases comprised of stripes, or even simply squares, of pure color. Although initially experimenting with pictorial scenes and even surrealism, Rothko has distilled the notion of what art is, providing emotionalism through his skilled architecture of color and space. What the paintings lack in images, they make up for in meaning through his expert combinations of pure color.

Such familiarity with this usual idea of a color-centric Rothko is instantly defied upon entering this latest exhibit. It is best to enter “The Tower” of the National Gallery through the elevator to see his earlier works first before witnessing the grand finale, the “Rothko Cathedral.”

The small and intimate collection of nine of Rothko’s small to medium works begins with his expressive figures of the 1930s, moves on to the surrealism of the mid-1940s, “multiforms” of the late 1940s and finally reaches his classic style of the 1950s. Overall, the paintings have thick oily brushstrokes layering grays, blacks and other neutrals, with an occasional bright color thrown in.

In an untitled picture, known as “Man with Green Face,” the subject’s deep green flesh forces the eye to explore the true color of the man’s seemingly plain black jacket. The repeated brushstrokes slick on layer after layer of darkness. Rusty shading gives depth and definition to the black mass, revealing the man’s folded arms. 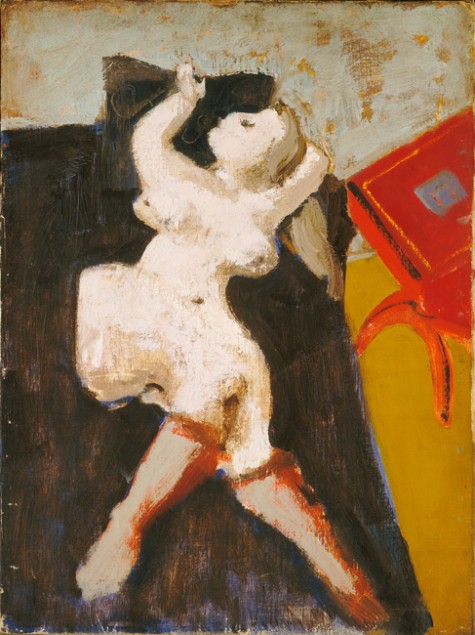 In another untitled piece, known as “Reclining Nude,” the artist is still in his early figure stage, but his exactitude when using color is further explored. A black bed that the woman lies upon takes over the page, covering almost all of it. But the intensity of the black — more brownish with a blue underlay — makes the pale, fleshy nude stand out. The contrasting darkness makes her appear more rounded, dimensional, as if her misshapen body and askew legs were about to emerge from the canvas.

The blue tones of the black pop against the mustard-colored floor and red nightstand. In spite of the dull coloring, the feeling of this painting isn’t melancholic. The figure appears blithe and content, gesturing her arm out as if she’s blowing a kiss. The exhibit proves that the dark colors do not have to equate to despair, although that was often suggested by critics due to Rothko’s moods, which culminated in his 1970 suicide.

Rothko advances in his style during his mid-‘40s “multiform” period, a bridge between his surrealism and later chromatic purism. Multiform “No. 10” has a dusty peach background with black blocks throughout the canvas, softened with a veil of gray brushstrokes. These dark forms float around the many blocks of color, seeping into one another in a calculated randomness. There is a dull pulsation to the picture as the black is not what it seems, with purple shadows as a backlight to the looming forms. Acid green and yellow light up the neutral, shadowy canvas.

These early paintings provide an intimate look into Rothko’s stylistic formation leading up to drama and darkness of “Rothko’s Chapel.” Collectors Dominique and John de Menil asked him to decorate a Catholic chapel (now non-denominational) they built in Houston, Texas. He surprised them with bold, gargantuan canvases done in his classic style, but missing his signature colors. The blacks, however, layer and differ, engaging the viewer in reflection, and appropriate for a chapel, provide a meditation. Dominique recalled of the pieces, “I felt held up, embraced, and free. Nothing was stopping my gaze, There was a beyond.”

The “Tower” exhibit, a trapezoidal room with white walls, houses seven black rectangles on the walls. On first glance, they seem to be only black squares. But standing in front of them for a while, the differences in the shades appear. Each canvas is composed of two blacks. The center blocks of black are subtly shinier, whereas, the flat, suede, alternate black lies beneath. 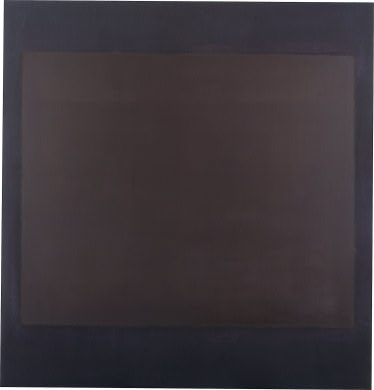 The monochromatic subtleties make themselves known: jet black, carbon, espresso, ink, eggplant, ebony. Suddenly you realize what your mother meant when she said that your black belt didn’t match your black shoes.

And yet, each individual color seems perfectly black, but only when adjacent to an alternate black does it seem rather off-black. This intersection of simplicity and complexity will definitely turn off the casual viewer. The massive black squares can have the same effect as a wall of paint chips at The Home Depot.

It may be hard to “get,” or even like, but it is interesting to stare at. Rothko didn’t just place manufactured colors next to each other, the color was laboriously achieved (although by the time of the Chapel pieces, he was in such poor health he had to oversee the paintings produced by assistants, taking over three years). Coat after coat of oil paint, the smoky edges of the contrasting blocks bleed into one another giving it an organic feel.

The austere drama of these simple black forms was designed not to be intimidating, but intimate. The de Menil’s chapel incorporated a subliminal echo of tradition with th assemblage of squares resembling an altar’s triptych. The meditative effect of the surroundings is enhanced with an instrumental piece made by his close friend Morton Feldman under Dominique de Menil’s instruction. Rothko was an avid reader of Friedrich Nietzsche, and The Birth of Tragedy Out of the Spirit of Music inspired the artist.

From that work, Rothko believed that a complete harmony required a full spectrum of emotions and media. The swirling strings, at times ambient, other times terror-filled, permeate the open space with a hypnotic poignancy, as the dark figures surround the Tower’s expanse.

Sarah Amos is in her second year at Georgetown studying Culture and Politics. When she’s not in the the office of The Hoya as editor of their A&E magazine, The Guide, you can find her studying Arabic, playing intramural soccer, or eating raw cookie dough with her roommate. Her interest in art began at an early age, with her mother, an art teacher, who taught her about Monet and van Gogh before her times tables. (Math was never Sarah’s strong suit.) She hopes to pursue a career in journalism — and is currently accepting job offers, so she doesn’t have to nanny again this summer.

Black on Black: Rothko by Sarah Amos is one of the five finalists in the 2011 DC Student Arts Journalism Challenge.

The Yellow Door By ramrod fleet, by coonskin cap,walking contraband visits the shops,in this one and out that one,purchases wrapped under arm or carriedin tiny...
Literary Arts

In the third grade, I sat in the last row.Chalk dust whisper down the slate blackboard.The radiators hammered like anvilsthroughout the morning. In the...
Poetry