Joan Belmar on his View from the Outside 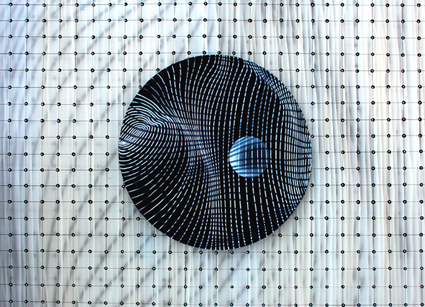 I have lived in many cultures, but have never felt completely at home in any one. Born in Chile, I moved to Ibiza, Spain at 24, and to the U.S. at 28. In each culture, I have experienced the feelings of an outsider. I have come to understand that “all is not what it seems.” My need to communicate this point of view is what drives my art.

In my recent work, I have created 3-inch thick worlds under glass. At the base of this world is plywood or masonite, on which I have drawn tools, toys, animals, or body parts that can just be detected by looking closely. The surface layer is acetate, on which I often make a geometric pattern or drawing to represent the external, structured, societal world in which everything would seem to have an objective measure and to exist within familiar rules. In between these 3 inches, I use Mylar and acetate to create layers that both expose and obscure the worlds within. Sometimes I use closely separated vertical strips of Mylar that are dyed with diluted acrylic. This heightens the effect I’m looking for, because as the viewer moves from left to right in front of the piece, new things that exist below are revealed and others become partially obscured. Also, the color intensity of the piece varies as you shift from looking at the piece head-on to looking at it from the side. The result I hope for is an organic and mysterious world that is in constant movement, as you shift your viewing position. One image that I have recently used is 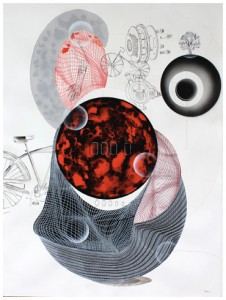 that of an old bicycle, because it touches upon both our interior and exterior worlds, and it also represents movement and change.

I am fascinated with color and transparency and the compression of worlds that coexist due entirely to the imposition of a technical structure. I think that I create this work as the result of my journey. I think of myself as a collage of experiences and even though many times I do not feel as though I fit in a place, I have access to these experiences.

I do not like to title my works with names that are too descriptive. I think names sometimes narrow the viewer’s focus. I want each viewer to bring their life’s perspectives to the viewing experience, with the hope that each viewer will discover something different.

I love taking advantage of technological changes and contemporary materials. I remember using thin layers of acrylic and oil to create abstract paintings back in 1996 in Spain – a combination of media that was frowned upon at the time – and I have continued to experiment with materials and imagery. I have used all kinds of material (fabrics, papers, plastics, glass, etc) but when I discovered the transparent qualities of acetate and Mylar and the effect of using them in combination, I began to make the dimensional pieces that characterize my current work. They are not exactly painting and not exactly sculpture, another ambiguity that I love. 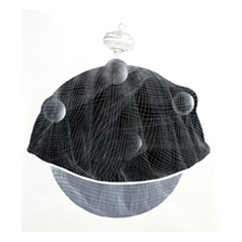 There are two pieces that have been especially influential in my work: Anish Kapoor’s blue egg and Tara Donovan’s thousands of styrofoam cups. I appreciate the way that Kapoor exploits all the tactile and physical characteristics of materials. He also succeeds in taking the viewer to a different dimension that distorts the senses. As an example, he has placed people playing as children in front of his work; this is done as part of the work itself. Tara Donovan’s work has similar qualities, but she uses disposable materials as glasses, straws, and paper, often in large installations, creating optical illusions that are a challenge to understand. Donovan uses a simple plastic cup to create a world!

I imagine that each of these artists must have a great time in the studio playing and making art from the play. As artists, we face a host of adversities outside our studios, but inside our studios we need to stay very close to our child inside.

Right now I am working on a series of paintings on paper and canvas. In these, the layering is more optical illusion than physical reality. These are a new direction for me and some of them can be seen in my current show at the Neptune Gallery in Bethesda. In the future, I would love to experiment with photography, using light and reflections as new way to create depth.

This month I will open a large exhibition at the Winvian in Litchfield, CT. 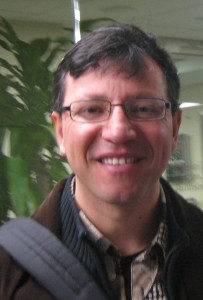 Joan Belmar was born in 1970 and grew up 2 hours south of Santiago, Chile. He left Chile for Ibiza, Spain, at the age of 24 where he began painting professionally, using the Catalan “Joan” for his first name, John. He came to Washington, D.C. in 1999, and was granted permanent residency in the U.S. based on extraordinary artistic merit in 2003. Belmar’s work is in the permanent collections of the DCCAH Art Bank, the District of Columbia’s Wilson Building, and the Airport Art Collection, Ibiza Spain. In DC, he has shown in WPA\C venues, the American University Museum ,the Chilean Embassy and the Corcoran Art Auction Gala. He has also shown in Chicago, New York, in Europe (Athens, Barcelona, London, Ibiza, Biella, Lisbon, Sevilla, Santander, Bologna, Malaga, and Rome), in South America (Buenos Aires and Santiago), and in Asia (Seoul). He was a Mayor’s Arts Award Finalist in 2007 as an outstanding emerging artist in Washington, D.C. The DC Commission on the Arts and Humanities and awarded him an artist fellowship grant in 2009 and in 2010, he was awarded an Individual Artist grant by the Maryland Arts Council.

Editorial assistance on this article provided by Ellyn Weiss