Creating the Temporary by Laurel Lukaszewski 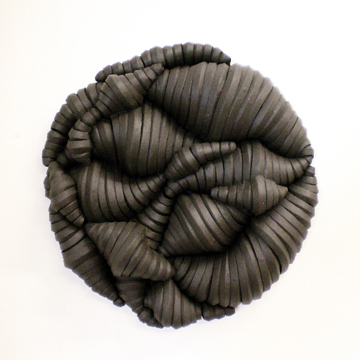 As a sculptor, I work primarily with clay, more specifically porcelain and black stoneware. My interest in clay started in a summer class when I was eleven years old, but the experience was not all positive; that summer I learned to hate the pottery wheel. The kick wheel, made for adults, was for me an exercise in futility. As a result, functional work has held little interest for me. It wasn’t until twelve years later, during a two-year stay in Japan, that I made my peace with the wheel, though I decided that I would leave the exquisite bowl making to more patient people. Separately, it was in high school and college where I learned to dislike glazes almost as much as the wheel. I managed to ruin just about everything I glazed. Despite my dislike of these two relatively fundamental elements of working with clay, I still loved the material and was determined to continue to explore it as a medium.

Over the years I discovered clay bodies that I found beautiful without glaze, being drawn to their way of absorbing or reflecting light, casting shadows, and holding textures. I also became interested in line and form, echoing a lifelong passion for patterns, rhythms and structures found in nature and rooted in my habit of incessant doodling and study of Japanese art and culture in graduate school. Experimentation in the studio led to the discovery that I could create three-dimensional “drawings” that could be built or erased simply by adding or subtracting individual pieces. I also discovered how dynamic the work could be by creating pieces that were assembled in reaction to the space where they were being placed. Often, clay sculpture is limited in size by the capacity of the kiln. It is also an issue that if part of a piece breaks, the whole is basically “ruined.” I found that creating and firing smaller components and assembling them afterward allowed me to create works that had two advantages: I could build works much larger than anything I could create whole in the kiln (my largest piece to date being a 16-foot hanging porcelain sculpture), and if one of the component pieces broke it could simply be replaced without affecting the whole work. 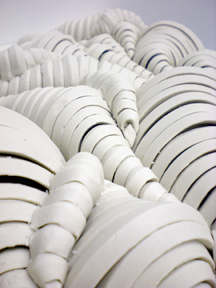 This idea of mutability — that a piece can be assembled, disassembled and reassembled in a new form — has become an important aspect of much of my work. The reality is that if moved, none of these installations can be replicated exactly when reinstalled. On a practical level, this allows me to create a unique piece for each new environment. I am also able to “recycle” the components of one work to create another. On a philosophical level, it helps incorporate my long interest in Japanese aesthetics and cultural concepts.

My recent work has been influenced considerably by the concept “ichi-go ichi-e” (一期一会), originally from the tea ceremony, meaning “one lifetime, one meeting” or “once in a lifetime.” Moving beyond the confines of the teahouse, this idea that an instance or a particular occurrence will only, can only, happen once makes time both special and poignant. It reminds me that no matter how good (or how bad), all is temporary. This idea suits both my abstract works that are assembled for only a short time (say, the duration of a show) and works that are more representational, such as my installations “Sakura” (cherry blossoms) and “Ghost” (leaves). It is with these ideas in mind that I continue to explore the boundaries of what I can create in the studio. Recently, I’ve been on something of a creative tangent, constructing abstracted patterns and textures inspired by shells and barnacles. These are for a show called “The Shell in Nature” this summer on Bainbridge Island outside of Seattle. I will also be showing new work in June at the Athenaeum in Alexandria, VA. 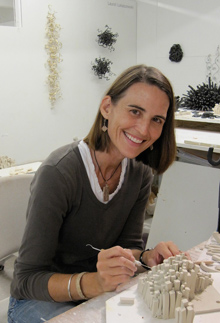 Laurel is a founding member of Flux Studios, in Mt. Rainier, MD. and has had residencies at Seattle’s Pottery Northwest and the Holland Hall School in Tulsa, OK. Laurel has served on a number of nonprofit boards including the Washington Sculptors Group, the National Cherry Blossom Festival and the Washington Project for the Arts Artist Council. Laurel holds a B.A. in International Affairs and an M.A. in Asian Studies from Florida State University in Tallahassee, FL.

Her work will be seen in “The Shell in Nature” at The Gallery at Bainbridge Arts & Crafts on Bainbridge Island, WA, from June 4 – June 30, 2010. (http://www.bacart.org/exh-upcoming.html) and in “Of Itself” at the Athenaeum in Alexandria, VA, also this June. You can see more of her work at: www.LaurelLukaszewski.com.