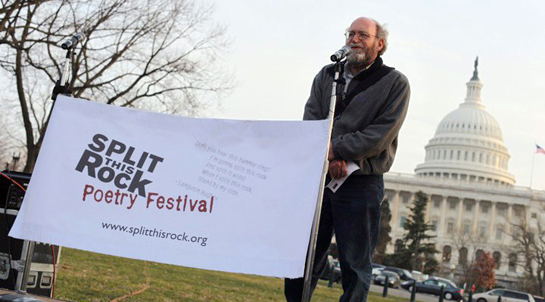 Lately, I have been misspelling words or reversing vowels — the mind gets sharper in some ways and slouchier in others as we age.

Age and knowledge and wisdom and learning are words that seem the best way to describe the Split This Rock Poetry Festival, which I attended last week. Others might use network, or protest, or activism. But poetry comes from people who will age; who gain knowledge, may become wise and are always learning. And poetry was the essence of the festival.

It’s appropriate that a “political” poetry festival would take place in our Nation’s Capitol –where else could it? Festival organizer Sarah Browning, my main man Regie Cabio, and their DC colleagues, are deeply dedicated to community, peace and the power of the word. And despite the occasional logistical challenge of getting one’s body from one place to the next, it felt as if everyone there, even the good people who work at the Thurgood Marshall Community Center, had a great time.

Patricia Monoghan and Michael McDermott, the co-founders of Black Earth Institute, invited me to join them on one of this year’s panel. Along with Patricia, Annie Finch, Judith Roche and Richard Cambridge, I spoke on the panel: Speaking for the Silence/d. Of course, being the gentle contrarian that I am, I spoke about listening — that we who speak are often speaking to indifferent, hostile or simply deeply ignorant audiences and that we have to start thinking of new ways to open ears. We each read a poem before speaking (a last minute request by Patricia M) so I read from my collection, Femme du Monde.

My mother tells me of seeing a man lynched
back in the 30’s, in Arkansas, not far from where
I grew up and grew away in the 60’s.

What I know about America is that hatred
crawls through the culture like the cracks
in the San Andreas fault.

Edifices are built to withstand the inevitable
quakes, but the quakes grow stronger..
What ever we dream harmony or a reasonable tolerance
is destroyed in the wake

of men drinking and killing. Their blood lusted
laughter howling through the night.

A Black man in Texas. A white man in Wyoming.
A doctor at his window about to eat dinner with his family.
A nurse on her way to work at a clinic.

The playing field is not level. In fact, there is no playing field.
There are men enraged by change. And women bitter about it.
And people, say
gay, Black, Latino, Chinese, Japanese, Arab, or Jewish
to blame, always to blame.

The ugly men in their same wool suits and striped ties
gibber political correctness, freedom, fairness
and fuck you
every time they claim that these are acts of individuals, not of society.
Each act alone represents

singular aberrant behavior, like murder.
I can hear them say, I mean they actually lynched that boy,
even as they call this one faggot and that one nigger.
And they really, really want women
compliant and girlish
or sexless and mothering.

And if this seems like male bashing, so be it.
If the dress shoe fits, may it pinch like hell.

The panel was rich in information and deep connection to a range of communities. Annie talked on collaboration in her Wolf Song project; Judith on her work with incarcerated girls and environmental projects; and Richard discussed the media’s mindset vis a vis our un-neighborly relationship with Cuba. Our audience was terrific–I got to meet Tracy Chiles McGhee and all the way from NYC, Marie-Elizabeth Mali and Victoria Sammartino as well as other teachers, arts group organizers, librarians, poets all. Patrica M. opened up the room for discussion and poetry and Victoria read a deeply moving piece about the incarcerated girls that she has worked with. It was truly moving.

Later that day I heard a bit of Camille Dungy’s talk on Black Nature: Four Centuries of African American Nature Poetry. Black Nature is a profoundly useful anthology that adds a different dimension to the conversation about the perception of nature by U.S. poets. That African Americans deal with the trees, rocks, cattle, sheep, flowers, ecological disasters, etc. should not be news, but for some in and out of the academy, it is. I also met Laura Hope-Gill from Ashville, NC and her colleague Trey Moore who are creating a kind of “poetry emergency response team” for communities that have had a traumatic event. Laura and Trey have some very good ideas and we attendees (age and wisdom here) – provided them with information and more ideas, but also pointed out possible pitfalls.

The final panel I attended was led by Andrea Carter Brown, and related to “historical” poems. I do use historical fact and/or myths in some of my poetry, but others are using facts and documents for their poetry. Scott Hightower’s presentation was particularly impressive because he spoke as a lyric poet (which he most definitely is) and as someone profoundly interested in unearthing the layers of story in the lives of people. Robin Coste Lewis talked about using the documents of her family, Louisianans who had moved to California – and while I didn’t say this, it does strike me that the internal migrations of people’s (Black or White) in this nation from crop failure, war, and social injustice and oppression are rarely told in American poetry.

Martha Collins talked about the development of Blue Front her amazing book length poem and Kim Roberts discussed becoming a literary historian: finding where Whitman lived while he was in DC, etc. and then writing about that. In discussion there I brought up two things: one that poor people often do not tell anything about their lives because of the profound difficulties they faced, and, the panel represented the first post- Jim Crow generation. We folk in our late fourties are the last American generation to live under legalized segregation. This is a complicated but healthy time in many ways for our Republic – sh*t is out here for all too see. How we work it through, well that’s why the Festival exists, I think – to give us more tools for gaining greater health in our ideas and ideals.

It was a great pleasure to present, and attend. Now back to the work of finding income to sustain my life, making poems, and doing what I can in this world.
Peace 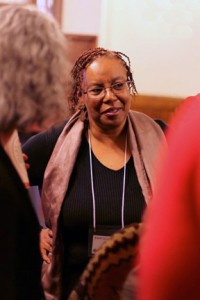 Patricia Spears Jones is an African American poet, playwright and cultural commentator. She is author of Femme du Monde (Tia Chucha Press) and The Weather That Kills (Coffee House Press) and editor of Think: Poems About Aretha Franklin’s Inauguration Hat (www.bombsite.org) and Ordinary Women: An Anthology of New York Women Poets (out of print). Her poetry is anthologized in Starting Today: 100 Poems for Obama’s First 100 Days; Black Nature: Four Hundred Years of African American Nature Poetry; Blood and Tears: Poems for Matthew Shepard; broken land: Poems of Brooklyn, Poetry After 911; and Best American Poetry, 2000. She writes the “Cosmopolitan in Brooklyn” column for Calabar Magazine and is a contributing editor to Bomb Magazine, both published in Brooklyn, NY. Mabou Mines commissioned and produced ‘Mother’ 1994 and Song for New York: What Women Do When Men Sit Knitting, 2007.

She has received grants and awards from the NEA, NYFA, the Goethe Institute and the Foundation for Contemporary Arts and residencies at Yaddo, Virginia Center for Creative Arts (VCCA), the Millay Colony and Bread Loaf. She is a fellow at the Black Earth Institute, a progressive think tank and was elected to the VCCA Fellows Council. She works as an arts administrator; poetry and creative writing instructor and fundraiser. She has taught creative writing workshops at Sarah Lawrence, Parsons School of Design, Naropa University and Pine Manor College’s Solstice Summer Writers Conference, as well as St. Mark’s Poetry Project, where she was Program Coordinator 1984-86, and for Cave Canem.

All photos by Jill Brazel