George Jackson: What is Dance? 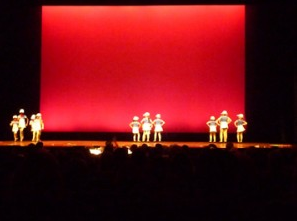 “Mother, please don’t make a scene!” The young dancer’s dominant parent didn’t respond to her offspring’s plea. Throwing a quick glance at the recessive parent who, standing to the side somewhat stiffly, was clearly uncomfortable backstage (he wasn’t always at ease out front, in the theater’s public areas, either), the woman wouldn’t let the ballet school’s director go. “Why didn’t you give my child anything to dance?” she hissed and without waiting for an answer continued her attack. “That character stands, walks and emotes, but we’ve been paying good money (another glance at the recessive parent) for dance classes, dance shoes, costumes, more classes and there was not one dance step in that role!”

Others were beginning to gather backstage and the director decided on a minimal response. “Madame, the part is key to the ballet, why the choreographer made it for his own child! No one but a trained dancer could take those poses, proceed with the requisite bearing, or gesture with the crucial clarity.” The mother hadn’t expected so authoritative an answer delivered in a voice as chill as the London fog, and so she just stood glaring, giving the director the opportunity to walk away. Quickly the young dancer and the recessive parent steered the woman to the exit door.

On the drive home, the woman remained silent, but once there she reiterated her complaint on the telephone to her older offspring who was away at college. “Can you imagine, she wailed “I’m supposed to be satisfied with pumped-up posing and looking commanding as being dance? You’re majoring in arts, please tell me what your experts there at your fancy university say dance is!”. The college student was used to the mother’s rants, but this time her topic was intriguing. What would Plato say, what Aristotle, or Richard McKeon? Beauty and truth, likely, would figure in Plato’s response, beautiful movement that truly showed the nature of the soul. But what is beauty, what is truth in movement, let alone is there a soul? Plato’s way might illuminate an ideal, but getting a practical answer along that path would take forever. Nor would that pupil of Socrates answer the question of what dance is, all dance, just plain dance. He’d be hot about good dance, skilled dance, but not about the sort of dance a child might do if asked to dance.

The college student was aware of the pitfalls of empiricism. It wouldn’t suffice to ask one child to dance, or even several. A statistically significant number of the world’s children would have to be asked to dance infront of trained observers who then would have to determined what all the exertions had in common. Where, oh where, would the funding for this undertaking come from? In the absence of an angel or a grant, the college student decided to improvise and self-observe.

The first attempt was done to music. This dance had rhythm, the body cupping into itself and opening up, taking on line and yielding it again, repeating phrases of movement but building them too, letting them grow and develop. It took effort, though, not to become enslaved to the music and simply mirror its patterns and form. So the college student tried a second dance, one without music. That was difficult, though, for the movements linked themselves to another sound, that of the student’s own breathing. Exhaling and inhaling established a rhythm as dominant as music’s meter and perhaps even more so. With willpower the student was able to proceed against breath, counter to its pattern, but were the resulting movements still dance or just wayward motion? By accident the student stumbled on something other than a beat that could give the exertions a sense of order. Place and volume became the matrices and made motion seem a dance. If the student’s body took on a squatting, pulled-down stance, one that looked voluminous, every time it came close to one of the room’s corners that generated a pattern and transformed motion into dance. Was it possible, though, to dispense with both time (rhythm, beat, pulse) and space (location, position) and still dance? Could there be a fifth and sixth dimension, such as memory and sensuality, that might be used? And why, anyway, does the mind need a set of coordinates to see dancing?

The student decided to give Aristotle’s definition of dance a chance. That tutor to the young Alexander wrote (or, perhaps we have just lecture notes full of mistakes that one of his students jotted down) about the arts as modes of imitation and that bodily “rhythm alone, without harmony, is the means of the dancer’s imitations”. By the rhythms of the dancer’s attitudes, humans (and animals?) are represented and also shown is what they do and suffer. “The objects represented are actions” for both the actor and the dancer, but a difference between dance and drama is the “manner in which” the object is represented. Dance imitates actions by means of movements that give pleasure to the eyes. Ah, once again, the Greek weakness of insisting on good dance! And, apparently, Aristotle never saw a dancer who substituted space, memory or sensuality for rhythm. So the student decided to use Aristotle’s dialectic on a wider range of experience. Had the great analyst sat in more recent theaters, he might have written that dance is bodily movement “done for its own sake” that engenders a recognizable pattern. The pattern can be in any dimension, not just time (rhythm), but it must be recognizable and the movement must be done for movement’s sake, not for producing consumer goods or waging war or giving artificial respiration. Not ruled out is that dance movement can produce pleasure in the dancer and, when it is well done, also in the observer. The latter has a better chance of experiencing pleasure when watching professional dancers whose bodies, molded by training, diverge from the norm and whose patterns, enhanced by technique, are compelling. As an activity done for its own sake, must dance exclude making Plato’s truth and beauty manifest? Or, Vestris’s virtue? Didn’t that French superstar of a few centuries ago say that to be a great dancer one must be a good person because on stage one can not get away with lies? Ah, idealism! Yes, dance may do that too but at minimum the movement, done for movement’s sake, must generate just a pattern, a recognizable pattern!

The college student, although exhausted from dancing and thinking, phoned home. It was late at night now and at the other end of the line the dominant parent, woken from sleep, said hello with a worried tone. “Oh, its you! And you want to know whether your sibling stood like a dancer and walked like a dancer, whether I saw a pattern in all that business! I don’t care, I wanted to see that kid dance like a dancer!” And she slammed the receiver down.