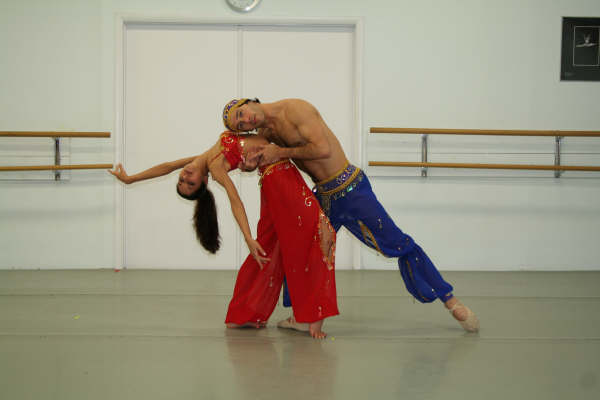 Every now and then I find myself sitting at the kitchen table, or at a restaurant, trying to decide what I want to do for the next year. It is never an easy decision, because you have to assess your resources. You always have limited money, time, and support, but unlimited passion. I decided last year that it was time for me to introduce “Scheherazade” to Baltimore. A gem of the Ballet Russes choreographed almost a century ago, the dancing is exotic and classical, and the music (by Rimsky-Korsakov) is flavorful and touching. I realized that I would have to restage the ballet for a smaller and more tentative cast than the original production, and began the creative process for my company and myself by studying various existing productions.

I started rehearsing the lead role with my partner in early March. Our pas de deux (dance for two) is 10 minutes long, demanding memory and stamina, yet does not contain particularly strenuous lifts. After the first half hour, it became obvious to both of us that all we needed was rehearsal time. We danced together in “Les Sylphides” recently, and have comfort dancing together.

I also started rehearsing the roles of The Persian King and his brother in March. Their interaction in the first and the third scenes is important in understanding the whole plot. I approached their choreography as if it was a new choreography. We began with the bare minimum cued to the music (we called it “the skeleton.”) By introducing subplots, I made them think and learn from each other. In coaching the development of their performances, I believe that “Less is more” only when you are comparing two different qualities. Any other time less is less, and more is more.

I started corps rehearsals with the Three Odalisques, a beautiful trio executing belly-dance-like movements. Since I was born in Turkey where belly dancing is a way of life, I retained the choreography, but added my own interpretation (which in my humble opinion makes it better.) I brought a DVD of a recent performance for the dancers to watch at the first rehearsal. Although this may seem like cheating, it’s actually a fairly common rehearsal practice. Dancers are frequently so busy with their own corrections during the rehearsal time that they can fail to capture the whole picture which for an artistic director, must remain the most important thing. Helping the dancers to see themselves within the whole picture speeds up the preparation period and makes the artistic director job easier.

I could not start working with the full corps de ballet till the following week (end of March), because I needed to be sure who was able to commit. By that time I had divided the ballet into three scenes, making it easier to schedule separate rehearsals for everyone. When working in a semi-professional situation, it is particularly difficult to be able to rehearse with the whole cast all the time. Someone is always either sick, having personal problems, or is injured. I read that Balanchine had similar problems in his early years in NY, and that is why he choreographed Serenade with different number of girls in each scene. Trying to mount a professional production under these circumstances can take a toll on you because you strive for perfection that at every step is unattainable. Much great choreography that we like today had been revised and re-staged with a different cast countless times. They are not a product of a single creator but a collaboration of many talented artists over time.

Now one week before the performance date, I finally see my dancers transforming into artists. In any live performance, the beginning is what grabs the 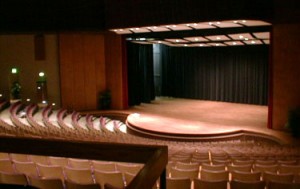 audiences’ attention, and the ending is what they will always remember. If what happens in between is good, you will have a great performance. When my dancers do well in the studio, I always say: ‘Good.’ If they can do it that way with the makeup, costumes, lights, sets and a little bit of stage magic in the presence of an audience, it will be “Great.”

Our performance is on Sunday, May 17th, 2009 from 5:00-7:45pm at Goucher College’s Kraushaar Auditorium. To purchase tickets for this performance please call (410) 667-7974, or email directors@baltimoreballet.com.

Cem Catbas, Artistic Director of Baltimore Ballet School, and co-founder and Director of Baltimore Ballet Company, danced principal roles with Pittsburgh Ballet Theatre, the Istanbul State Opera and Ballet, the Istanbul Contemporary Ballet, and the Koblenz Ballet in Germany. Awards he has won include the 2006 and 2002 Individual Artist Award for excellence in solo dance performance from the Maryland State Arts Council, 1st prize in the 1st International Seleznyov Ballet Competition in 1991, and the Most Promising Dancer award from the city of Istanbul. He has a B.F.A. with honors from the Istanbul University State Conservatory where he studied with Ramazan Bapov, Nikolai Morozov, and Ludmilla Morkovina. He has worked with Ben Stevenson (Houston Ballet), Patricia Wilde (NYC Ballet), Marianna Tcherkassky and Terrence Orr (ABT), Richard Glasstone (Istanbul Ballet), and Kent Stowell (Pacific Northwest Ballet), among others. He has choreographed “The Nutcracker”, “Pictures at an Exhibition”, “A Gershwin Rhapsody”, “Carnival of the Animals”, excerpts from “Petrouschka” and “Scheherezade”, and staged “Les Sylphides,” the 2nd act of “Giselle”, “Swan Lake” and “La Bayadere” for Baltimore Ballet. He has been a judge for several competitions including the Frederick Arts Council. His students have gone on to dance professionally, have won numerous awards including 1st Prize at the regional Youth America Grand Prix Competition, and have been accepted into the most prestigious summer programs with full scholarships (including NYC Ballet’s School of American Ballet). He has been interviewed on WMAR-TV, WJZ-TV, and Comcast Local Edition. He has given Master Classes in the US, Canada, and Europe.