Creating ‘My Ocean is never blue’ by Daniel Burkholder 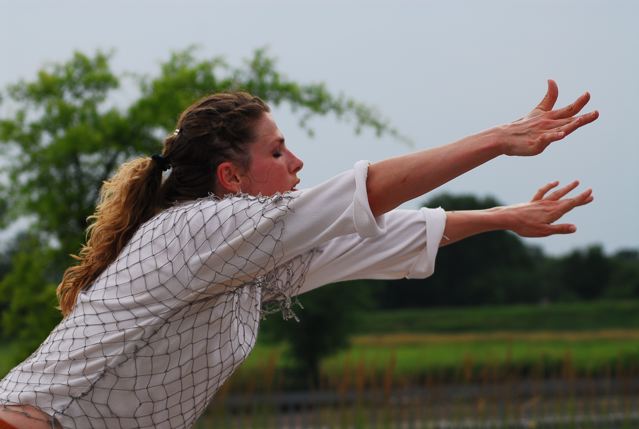 For the past two and a half years my company, The Playground, and I have worked exclusively on “My ocean is never blue”, an ever changing and evolving performance project that explores our multi-faceted relationship to water – from the personal, to the ecological, societal and political. This work reflects the complexities of our relationship to water by layering choreographed phrases, improvisational movement, live music, text and video to create an ever evolving, collage-type work.

We have explored a wide range of material in the creation process, and have been inspired by various reflections, including: the impending water shortage, irrigation, the meanings of the word “drench”, the molecular structure of water, tsunamis, baptism, the tidal zone of the eastern sea board and the Japanese Tea Ceremony. In the research process I also came across the book Who Owns The Water?, edited by Kaus Lanz, Lars Muller, Christian Rentsch and Rene Schwarzenbach. The book contains some striking statistics that highlight our complex relationship to water. Finding a way to integrate all of these diverse thoughts has profoundly influenced how we are making this piece.

Many companies set ahead of time every motion that will be performed on stage. My company, The Playground, has always performed improvisation. Where other companies rehearse the very specific motions that might appear on stage, we rehearse the process that leads to those motions. Often our work is very open-ended and completely different with each performance, but sometimes we use a very strict structure so that each performance is similar to the next. For instance, in 2005 as part of a Local Dance Commissioning Project from The Kennedy Center, I created a re-imagination of Twyla Tharp’s classic Nine Sinatra Songs. While we were performing improvisation, our structure ensured a similarity and consistency from one performance to the next. With “My Ocean is never blue”, the company and I are exploring greater fluidity – which for us means not just ‘improvisation’ as a performance practice, but fluidity within the structures that combine to create the whole work. 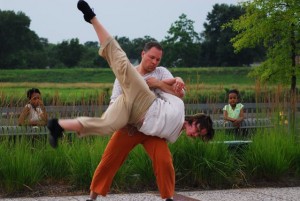 There will never be a final version of this work. As we prepare for each performance we add, subtract, edit, rearrange and reconfigure the different sections to create a performance that, like water, is never the same twice. For each set of performances we recreate the structure of the piece, including the number of people in the work (from 7 to 18) and its duration (from 12 minutes up to 55 minutes). Sometimes the order of sections is set, and sometimes the order is open ended, created as we perform. For example, at our fall 2008 performance on The Millennium Stage at The Kennedy Center we set the beginning and ending, and we knew what sections would be performed in the middle, but not their order. After the opening section the dancers would trigger which section would follow, and since this was always different, the order of the work was always different. So, if the order is never the same, were we performing the same piece at each performance, or somehow an entirely new piece each time?

In our first version of the work we created a number of solo, duet, and small group sections that we juxtaposed in performance with large group sections. In that first version the smaller sections were distributed evenly amongst all of the dancers, so that no one dancer stood out from the group. In a more recent version I focused the dance around one dancer, Christine Stone Martin. In that version Christine performed all of the solos, and was part of every group section as well. Working with form in this way has provided an additional opportunity to explore performance structure in relationship to perceived meaning.

Because this project doesn’t entail having a set piece that we perform over and over, each audience gets a different take on the work. An audience member at one show sees only some of the possibilities within the whole. I’m curious about people’s interpretation of the work when they see it once, and then how that might change as they see the work in different contexts, with different structures and with different material edited in or out.

Creating this work is a multi-year research project into water, and its various meanings. It is also a lens to explore composition: how meaning is affected by shifting structure and its context. I hope you’ll join us at Dance Place on March 28th and 29th to experience our continued explorations of ‘My ocean is never blue’.

Daniel Burkholder is the Director of The PlayGround, a movement based improvisational performance group, and Co-Director of Improv Arts, inc. 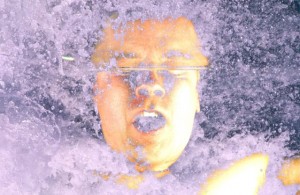 His work has been awarded the 2006 Metro DC Dance Award for “Outstanding Group Performance in a Dance Production” and in 2005 he received a Local Dance Commission Project through The John F. Kennedy Center for the Performing Arts. He has served as a curator of the DC International Improvisation Festival and on the Steering Committee for the West Coast Contact Improvisation Festival. His work has been seen throughout the Metro DC area, New York City, San Francisco/Bay Area and the Mid-Atlantic region and has been commissioned by CrossCurrents Dance Company, Montgomery College, Community College of Baltimore, Joy of Motion Dance Studios, Maryland Art Place, Dance Place, and Choreographers Collaboration Project. In the spring of 2003 Daniel was a Resident Artist in the Djerassi Artist Residency Program in California. He currently teaches at George Washington University, Joy of Motion Dance Studios and Dance Place. Additionally, Daniel is a Guild Certified Feldenkrais Practitioner and maintains a private practice in Silver Spring, MD (www.integrated-body.com)