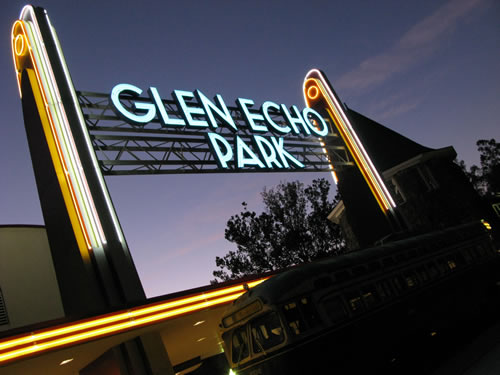 When I arrived in Washington in 1975, the dance landscape looked radically different from today. There were very few modern dance studios or professional dance companies. There were even fewer performing venues available to the companies that existed. I decided to create a dance center to help fill the void. After pursuing a variety of location options, I settled on Glen Echo Park as the home of my imagined dance program.

To most people at that time, it was an unlikely choice; a decrepit amusement park with buildings dating from the turn of the century through the 1920’s, filled with a hippie-like group of artists and set outside the city. The Park Service warned me that other dancers before me had tried unsuccessfully to start a dance program at Glen Echo, including Jan Van Dyke, the grande dame of DC modern dance. I was undeterred – partially by my stubbornness, partially by my belief that what I was attempting to create was so unique it had to succeed. What I envisioned was a dance center that would have a professional modern dance repertory company that would provide opportunities for emerging choreographers, an apprentice dance program for developing a new generation of modern dancers, a studio that offered study in a variety of disciplines but focused on modern dance and a Summer Dance Festival that would provide exposure for local dance to the entire metropolitan area. Glen Echo, with its large facilities, artists’ community (which provided countless opportunities for multidisciplinary work), and potential support by the National Park Service, seemed to be the perfect location.

I offered my first classes at Glen Echo during the summer of 1976. The space I was given was the Spanish Ballroom, a magnificent space during the 1920’s, but at that time boarded up and filled with broken glass, fleas and raccoons (both dead and alive). With fellow dancer and good friend Stan Fowler, the beautiful maple floor was cleaned enough to hold a summer session of modern dance classes. However, as the weather turned cold, the space was no longer suitable and I brought my students to Mt. Vernon College, where I was teaching in the adult education program.

The following spring, I asked the Park Service to allow me to expand the summer program to include more classes, and performances by local dance companies. They agreed, allowing me to present the first Summer Dance Festival at Glen Echo. One of the more memorable performances of that inaugural summer was by the newly created Washington Ballet, featuring a young, unknown choreographer named Choo San Goh.

Unfortunately, I was for the most part, working alone. My only help came from Stan, who provided technical assistance for the performances. In addition, I taught all the classes. At the end of the summer, the dance program was the largest program at the Park, and I applied for a year-round facility and permission to expand the program further.

In August of 1977, I was given the use of a fairly large room beneath the Park offices. It had a terrible floor for dance, linoleum over concrete, but it was heated. I immediately held auditions for what was to be the first modern dance company at Glen Echo Park. The dancers I hired were selected not only for their talents as dancers and dance teachers, but because they also shared the vision I had of creating a very different kind of dance program. Those first dancers were Cheryl Koehler, who was also an accomplished choreographer and musician, Becky Westwood, Roberta Rubin, Steve Johnson, Stan Fowler and apprentice dancer Linda Hindley. Within a few months we added two other dancers, Sandy Asay and John Kramer, and Glen Echo Dance Theater was born. During the first year, we performed works that Cheryl and I choreographed and also had a new work created for us by Greg Reynolds, a former dancer with the Paul Taylor Dance Company. Greg was now looking to make a name for himself as a choreographer and was eager to have a company to choreograph on. Our first performance was held in the Adventure Theater at Glen Echo Park and we received a promising review from George Jackson.

The first year was primarily one of development: developing the company as a coherent group of dancers, developing choreography from within and outside the company, teaching classes and securing funding for the festival and a more permanent studio space. There was great progress made during that first year. In addition to the growth of the dancers and the repertory, our studio grew exponentially. We had so many students that we had clearly out grown the space we were using. At that time, one of the resident artists at the Park decided to move on, leaving her space, the old Hall of Mirrors, vacant. It could provide us a home with a nice sized studio on a suspended wood floor, dressing rooms and office space. I applied for residency status and was awarded that status in 1978. Now we had a permanent home for classes and rehearsals, plus the use of the Spanish Ballroom for performances.

However, both spaces were in need of major work. The studio needed to be converted from a one-room pottery studio into the divided spaces that we required. Most important was the need to cover the aging and splinted wood floor with a suitable dance floor. The Ballroom needed even more work. We had completely cleaned up the space, but its vast size, lack of audience seating or designated performing space and no theatrical lighting meant all performances had a very informal feel to them. What we really needed to do was to retrofit the building to create a real dance theater.

The studio transformation came first. Stan, who was an electrician, chemist and a bit of an engineer, in addition to being a dancer, designed a studio floor. Steve Carty, an apprentice to the company and Alex Rounds, who was one of my students in the very first contact improvisation classes taught in Washington, worked with Stan to build the studio. Both men continued to dance in Washington. Alex became a very accomplished and well-known dancer in the contact-improvisation world.

Then came the Ballroom. Stan, who was at that time hired by the National Park Service to provide technical assistance throughout the Park, managed to procure theatrical light fixtures from some of our ‘sister’ parks, including Wolftrap. He also picked up scrap metal parts such as old World War II bomb holders and metal pipe to create a grid that would be suspended from the Ballroom ceiling and support the lights. We requisitioned risers and chairs for audience seating, rolling space dividers to create wings and ultimately rented and purchased theatrical curtains, masking and an enormous custom made cyc for a backdrop. By the summer of 1978, the Spanish Ballroom had been converted into one of the nicest performing spaces available to the local dance community. In addition to the physical space, through state, county and private grants and donations, the Summer Dance Festival was able to provide paid performing opportunities to professional companies and free performing opportunities to emerging or student companies. These performances included performing space, all technical assistance, publicity, and often a much-needed review and/or video services. Dance companies were exposed to new audiences, as the festivals would draw generally 3,000 people over the course of a day. The festivals, which ran over the entire summer, from 1978 – 1990, had a variety of workshops, master classes, lecture-demonstrations and both formal and informal concerts on stages set up all over the Park. Not only was this of great benefit to the dance community, the greater Washington area benefited by having so many exciting dance opportunities offered throughout the summer at no virtually no cost! All of the events, with the exception of the evening concerts in the Ballroom theater, were offered for free. Artists who performed in the Festival included Liz Lerman/Dance Exchange, Tish Carter and Nancy Galeota’s New Moves, Sharon Wyrrick, Sally Nash, Debbie Kanter, Maryland Youth Ballet, Eric Hampton, and also companies from outside Washington, including the Jose Limon Company.

As the Festivals grew in size and stature, so did the studio and the company. Studio classes were offered by some of the best teachers in the metropolitan area, including advanced ballet for modern dancers with Ann Parsons and Mimi Legat and modern dance with Pola Nirenska. In addition to teaching classes, Pola came to Glen Echo to choreograph on both the resident company and also a series of guest dancers including Rima Faber and Collette Yglesias. The company had numerous critical successes and was featured in such prestigious venues as City Dance at the Warner Theater and a residency at ArtPark, in NY. Over the years, many outstanding dancers were members of Glen Echo Dance Theater including Nancy Galeota, Tish Carter, Ellie Denker, Katie Fowle, Jeff Moreland, Beth Davis, Bonnie Slawson, Betsy Eagan, Stephanie Simmons, Susan Hannan, Tom Truss, etc. In the late 80’s I expanded our residency to include Liz Lerman/Dance Exchange. The apprentice dance program, one of the few modern based apprentice programs in the country at the time, trained numerous young dancers who went on to dance in professional companies in NY including Leslie Ruley, (Nikolais), Debbie Cohen (Mark Dendy) and Beck Jung (Pilobolus) as well as other dancers who joined Washington based companies.

Many dancers and dance writers in Washington describe that time period, the late 1970’s through 1990, as the ‘heyday of Washington dance’. I like to think that Glen Echo Dance Theater had some part to play in that.