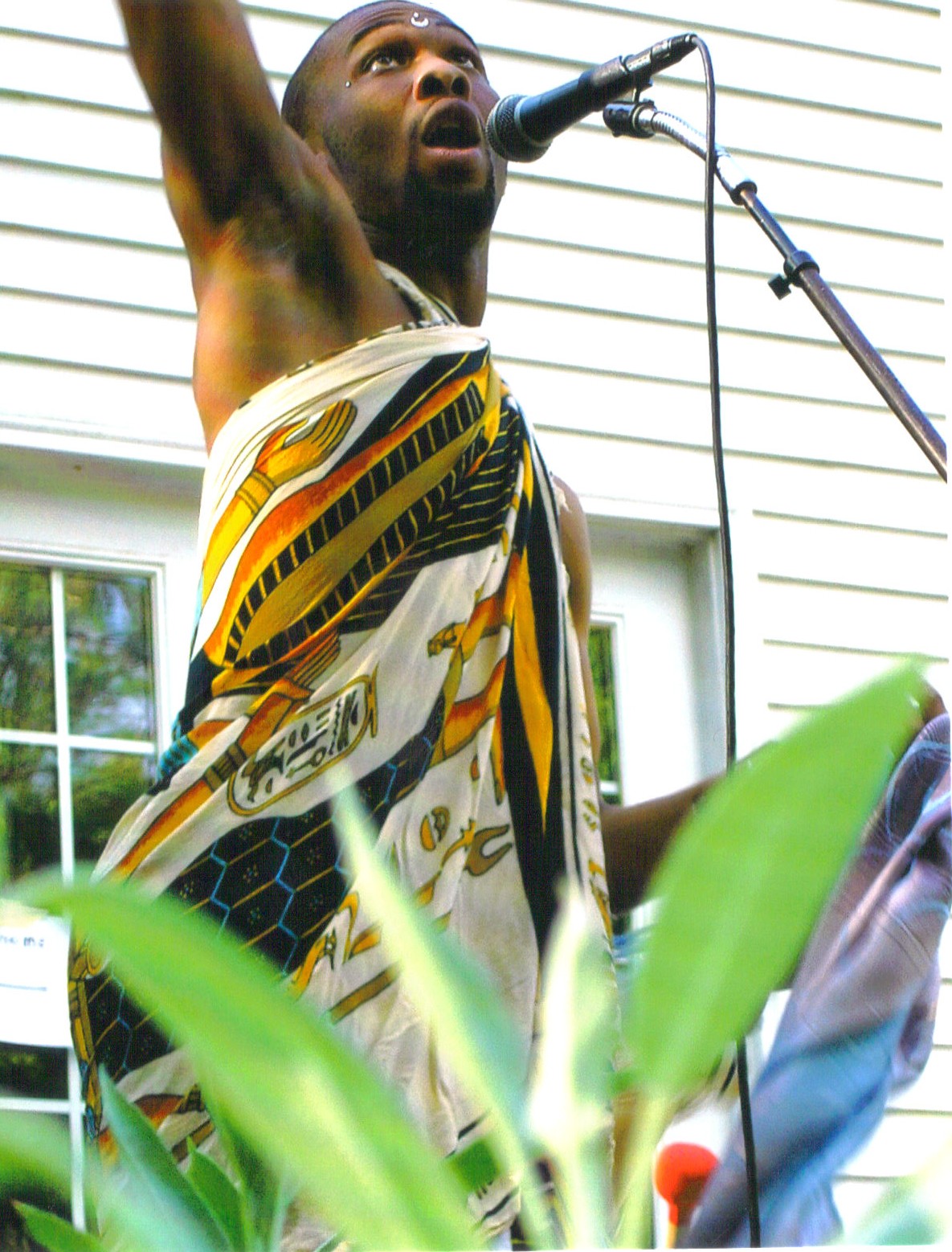 When asked to write about a work or the concept behind it, I often find myself at a loss for words. I do include writer amongst the many titles assigned to me, but normally that indicates poetry and fiction, not journalism. I believe this is why I choose cabaret: because in a cabaret I am myself. There is the dangerous expectation of success of a joke, a note, or a dance, and the reality that you are naked before the audience, and have given them the right to judge the inner most parts of your being.

Let me start at the beginning I suppose…. I am Dane Figueroa Edidi, called by some: “The Ancient Jazz Priestess of Mother Africa”. I am doing a cabaret on December 9th at 4:00p.m in JPH in the Benjamin T Rome School of Music. The cabaret is entitled Eggun Speak. I am performing with my band, the Afro Blue Collective. The Afro Blue Collective is: Mark Cook on piano, Andrew Cox on bass, Kristin Arant on African drums, Bubbles Dean on drum set, and Rob Muncy on Saxophone. This is our first cabaret since we lost our dear friend Henry Moses – may he rest in piece.

Eggun Speak is a jazz cabaret that combines the musical expressions of jazz, Afro-Cuban and African music, with African, Belly and Afro Cuban dance and story telling. (Yes there is a difference between African and Afro Cuban.) In one section of the work I say, “the peace will take you from the deep glories of Mother Africa into the complexities, contradictions, beauty, and struggle of Afro, Cuban, and Native America”. I am all these things: Nigerian, Cuban, Cherokee, and born in America. I am a performance artist, singer, dancer, actor and writer.

Eggun Speak brings together all of the skills I have been blessed to work with, including my religious path. To me the arts are religion. They are able to touch the very depths of humanity and speak to parts of our being that even we are unaware of. Art is pure in its ability to touch the higher and lower selves. My body and soul come together during a performance to summon forth Spirit – whether to heal or to send messages. ‘Eggun’ in the Yoruba tongue means Ancestor (or Spirit). It is the word assigned to those Spirits that are close to us, whether it is an ancestor of Spirit or Blood. These are who we honor with this cabaret.

The piece normally begins with libations, first told through my body and then spoken into the Ethers so that my words may be prayers for those Ancestors who will hear them. The Band and I move through (in a musical sense) a series of songs that are picked for their relevance to a story, an ancestor or just because I can sing it well. The show ends with Afro Blue, The song which gave us our name and the piece which bonds us together. This song is almost like a hymn to me. Whenever I sing it I am filled with a presence I can not explain, and it instinctively invokes me to move.

My first time hearing the song was on a Dianne Reeves c.d. She combined a chant to Mother Yemonja (a Goddess of the Yoruba people) and the brilliant rhythms of Africa. I was so moved that I felt I needed to do the piece. My first rendering of it was years ago. I was a Senior in college and sang it with the jazz band at CUA. That first time singing Afro Blue I received a vision of dancing during the song as well. I did not turn that vision into reality until I performed in my first DC cabaret later that year, and when I did: let me tell you it felt right. 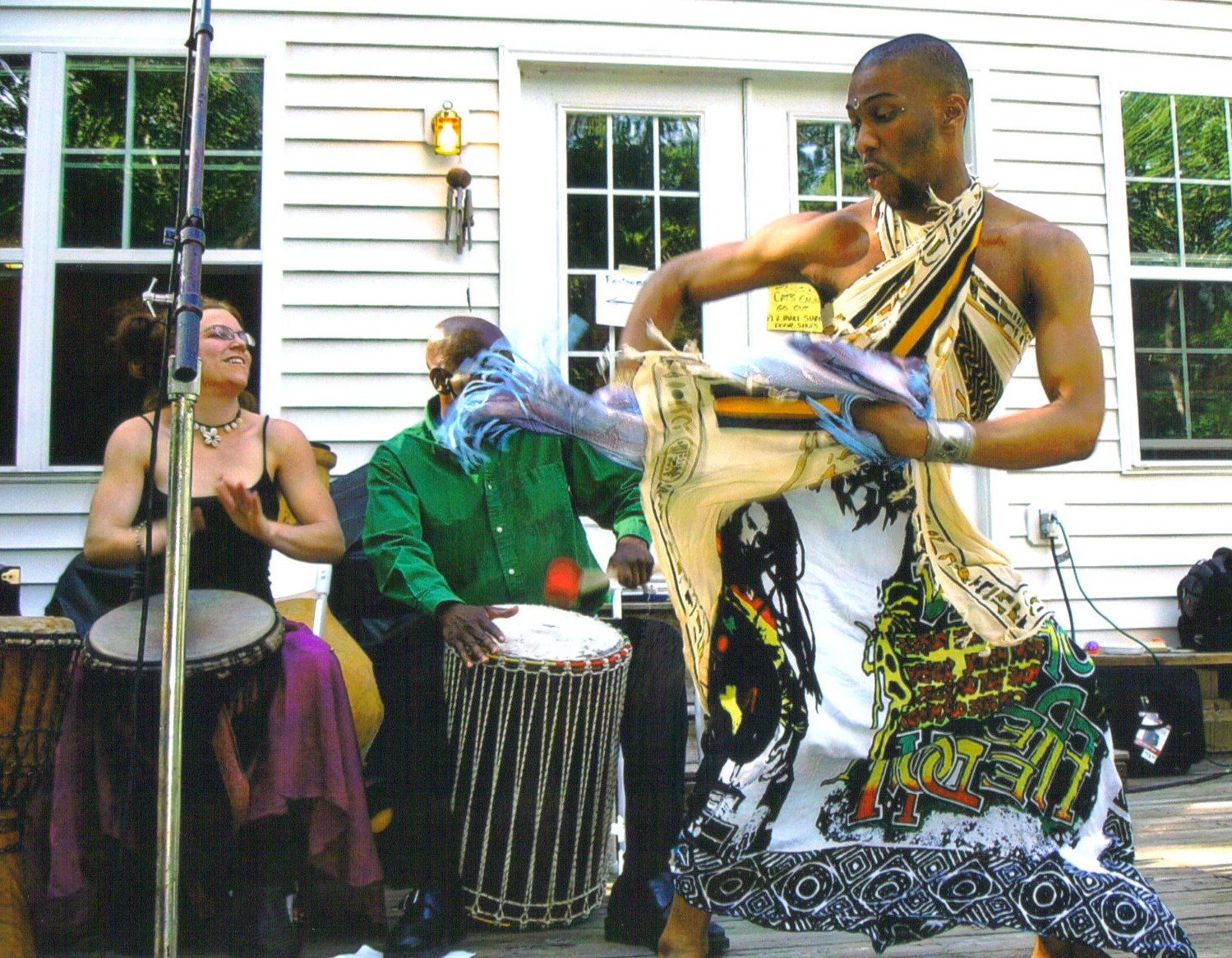 Mark “papa” Cook once said “You don’t listen to Dane, you experience Dane.” I couldn’t understand what he meant until I watched videos of myself and I realized that my body has become one of the instruments of the band: it can not help but to speak what my words can not fully express. In feeling the African rhythms and allowing my body to be moved by the Spirit of the music I learn its importance, and the role of the body as an instrument for change. I have been told that my dancing releases something in others, and that my singing, a tango of vocal chords, melody and body, has the power to invoke the unseen. I know none of it would be possible without the music. The Gift I have been given comes through me as the music summons it forth, as the instruments like priestly chants call to the Spirit, and even my singing moved by the Know commits to the expression of body in space.

My dance moves are unrehearsed. With their spontaneous expression I connect to my ancestors. When I watch old videos of my work, I am reminded of dances of the Yoruba, of the Congo, Belly dance; I see an amalgamation of cultures and Ancestors take place and I am truly humbled, because in that instant when you are outside of the experience and watch it, you realize the beautiful way in which the Creator works through the art. I feel like I have babbled on about a topic which needs more time to discuss. I will say: come and share in the experience with us! Perhaps, a tune will make you laugh or speak to your tears. Perhaps, a story will beguile you into revolution, or roar you into change. Perhaps, a dance will spiral concepts of ethereal truth into your soul adorning you so that you will never be the same. Perhaps, this Collective of Musicians with their external instruments and ones of the inner will stand naked before you, clothed only in their art and take you to a spirit place. One of my religious friends would probably say, “They gonna take you to Church!”

See the cabaret Eggun Speak on December 9th at 4:00p.m in JPH in the Benjamin T Rome School of music With a small reception to follow. 620 Michigan Avenue, Washington DC 20064. Donations of 10.00. Tickets will be available at the door. For more info you can email Figueroa11n1@aol.com or visit www.myspace.com/DaneFigueroaEdidi.

Bio: Dubbed “Lady Dane, The Ancient Jazz Priestess of Mother Africa,” Dane Figueroa Edidi was born in Baltimore MD, and began singing at the First Emmanuel Baptist Church at the age of 5. Nephew to Baltimore Jazz greats Liz Figueroa and Bill Byrd (who passed away in 2007), the art of jazz was always amongst the many musical influences in his life. Dane began studying under the likes of the late Ruby Glover and Mark Cook becoming an Artist in Residence at the Great Blacks In Wax museum in the late 90s and, after watching a concert featuring Fertile Ground, began combining the music of his Ancestry into his cabaret work. Dane made his Baltimore Cabaret Debut in 1998 alongside the Joel Holmes Trio. He graduated from the Baltimore School for the Arts in 2001. He has a BM from Catholic University (2005), and made his DC cabaret debut in 2005 with The Afro Blue Collective (consisting of himself, Mark “papa” Cook, Kristin Arant, Andrew Cox, Bubbles Dean, Rob Muncy, and the late Henry Moses). Dane, a Nigerian, Cherokee, Cuban performance artist is also a religious historian and has begun learning about the religions of his ancestry revering them in His cabaret work…he is a writer, local dc actor (working at Round House Theatre, the Kennedy Center, and Adventure Theatre.) dancer, and composer. He also specializes in holistic healing through guided meditation… In 2007 he had the great pleasure of joining the renowned Afro Cuban dance company called Alafia Dance and Drum stationed in Mt Rainer MD (lead by the dynamic Oscar Reseaux), and is currently working on a book of poetry called the Sacred profane; Hymns to the Mothers.