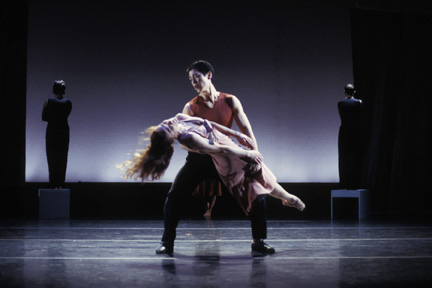 On October 12, 2007, I will premiere a new company work at the Kennedy Center’s Terrace Theater entitled, Chino Latino. This suite of dances references my teenage years in New Mexico. I grew up in Santa Fe attending Spanish and English bilingual schools. Although I am Korean-American, my nickname at school was “Chino”.

By night I would go salsa dancing at the Cactus Club, a questionable establishment located on the outskirts of town. My high school accounting teacher was the bouncer/doorman. When I entered those doors, I saw the shadowy outlines of people who I longed to know, and wished I could dance like. I wondered who they were and how they had built their nightlife personas.

This season, I entered the studio to build a movement vocabulary from the life that I was engrossed in when I was in New Mexico. In addition to my social dance experiences, I religiously took martial arts and modern dance classes as a teenager. All of these images and experiences went into Chino Latino. The vocabulary we have been developing is a synthesis of martial arts, salsa, meringue and modern dance. For a sound score, I chose Spanish music that evokes the presence of Asians in Latin and South America from the 1920s to the 1970s.

My company has toured extensively through South America over the past decade, and at each stop I have met artists of Asian ancestry, many from families that immigrated in the 1800s. We have spoken of shared experiences growing up Asian in a Latin culture. I have enjoyed encountering the multi-faceted visions that emerge from our common cultural intersection. There is a particular synergy in Asian and Latin cultures that combines to develop a distinct voice. I like to call this an ‘Asian-Americas Aesthetic’.

I am finding that tapping this history provides me with a great source of inspiration for dance-making. Global exchanges and new visions for art are all around us. They begin on the simplest personal level, such as a social dance, and manifest as public art. All those late nights in the smoke-filled Cactus Club have left me with wonderful memories, and better yet, choreographic inspiration.

Dana Tai Soon Burgess is the Artistic Director of Dana Tai Soon Burgess and Company. His choreography has been presented and commissioned by The Smithsonian Institution, The Asia Society, The Kennedy Center, Lincoln Center, La Mama, and the United Nations. He received the District’s Mayor’s Arts Award in 1994 and 2004. He is on faculty at The George Washington University.

Here is some video of a piece made by Dana Tai Soon Burgess. The images illustrating this article come from this piece.