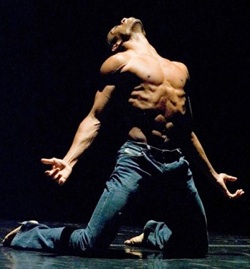 A friend recently turned and said to me, ‘Oh, you’re a dancer. That’s so great that you’re in touch with your feminine side!’ I replied: “dance is masculine, woman!” It reminded me that aspects of our life today are embedded with expectations of gender and sexuality. Dance is inherently neither masculine, nor feminine. Dance is also neither straight nor gay.

In performance practice there are issues of character creation that legitimately come into play, as they do in the theater world. Classical and narrative dance of course relies on the creation of character, and so of necessity, stereotypes are used. In the use of character within abstract work, however, it seems frequently as though our community relies on the same ‘character’ types that much of the work is seeking to both acknowledge and dissolve.

Artists are the visionaries who create the new world. At least that’s what it says in our press packet. And so while we are representatives of communities, we are also leaders, responsible for helping others find the new light, the new way, the truth, and the way away from ‘The Guiding Light.’ When we pay homage too deeply to existing stereotypes of humanity we lose our ability to express a more complex, holistic humanity.

Art – dance inclusive – has always been a home for the alternative. Artists are ‘different.’ Today as all members of the society jockey for full participation, artists are unfortunately making our own acceptance more difficult by producing work that fetishizes notions of masculine, feminine, straight, and gay. I can count on two hands the number of pieces that I have seen in the last year that offer overt celebration of stereotypes. To the degree that we as artists prepare the audience to see the world in stereotypes, we perpetuate a society that only knows how to know through separation. Whose identity is it anyway – ours or the audiences? Whose character is it anyway?

The situation is complicated by the need to simplify things to engage an audience. We can not tell our real stories if everything looks muddy. Nevertheless – are there essential character traits to being a man? Are there central character traits to being a gay man? It is fine to answer glibly that, yes, being a Man (capital ‘M’) means liking beer, sports, and Jessica Simpson, and that being a gay man means liking fashion, wine-coolers and Jake Gylenhall. But that is not only bullshit, it hurts all of us. The fetishization of ‘gay’ characteristics, the fetishization of ‘female’ characteristics, pigeon-holes not just the artists but the audience into roles that have nothing to do with their character.

Being a dancer does not imbue one with a character. Being gay does not give one a certain character. Being a woman does not give one a certain character. We still live in a world where smart people – for example Lawrence Summers, recent past president of Harvard University – still actually debate whether men and women have the same intellectual possibility. As long as we – the visionaries of society – project the stereotypes of masculine/feminine/gay/straight we give validity to the limits placed on any of those groups. Perpetuation of stereotypes in gender, sexuality, race, ethnicity, and age may be a part of our past, but they do not have to a part of our present.

Robert Bettmann is the founder of Day Eight, the organization that sponsors Bourgeon: Journal of Dance. He is a dancer, and writer. Some of his writing can be seen on the Day Eight website: www.dayeight.org. He has a BA in Environmental Studies from Oberlin College, and an MA in Dance from American University.

originally published in Bourgeon Vol. 2 #3 as “Sex and Sexuality in District Dance”.