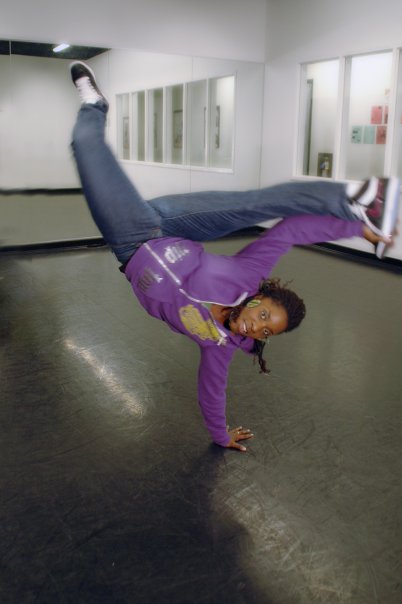 originally published in the Focus Section on “Technique” – Bourgeon Vol. 2 #3

“Wanna see me poplock?” “I can do the robot.” Yes, poplocking and the robot seem to be the staple, go-to Hip Hop dance moves for anyone trying to show they can get down. Sure it brings a smile to everyone’s face and we usually applaud this eager, enthusiastic showmanship. It’s all good. Or is it? Music videos and TV commercials have made Hip Hop dance a golden ticket, making it accessible to anyone, anywhere. The dance form that started in an alley with such rawness has traveled far from home, crossing economic and cultural lines across the globe and becoming ubiquitous in the consumer market. One has to wonder if and how something so stylized and indigenous of a particular space and time has maintained its roots as it has been packaged and shipped across the globe. Can Hip Hop maintain its integrity as a dance form with so much focus on its entertainment value? Is there a right and wrong way to do it, to teach it, to discuss it? Is there such a thing as Hip Hop technique? We may need to work backwards to find an answer.

Hip Hop is not just a trend or fad, or young people behaving badly. It is a cultural product of 1970’s urban history. It is not something that started in a studio or under a microscope. Hip Hop began as a counter culture. In 1970’s New York, the streets were both a classroom and a playground for disadvantaged youth. It was here that they created an expression called Hip Hop that quickly made its way into the mainstream.

The four original elements of Hip Hop are: emcees, DJs, graffiti and dance. As the gang era subsided in the Bronx in the 1970s, graffiti, music and dance surfaced in a self-organizing effort, one which provided the recreational and familial aspects of gang life, but was more constructive and less violent. DJ Kool Herc ushered in a new sound on the turntables that let dancers break out on the dance floor. Herc founded the “Merry-Go-Round” 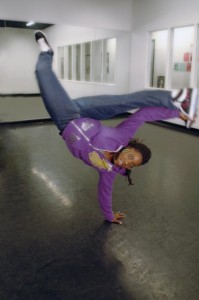 technique that allowed him to spin two copies of the same song and extend the break in a song – that’s when the break boys, or b-boys, would take to the floor with new, acrobatic movement. This was the birth of breakdancing. For these African-American and Latino youth, the dance crews replaced gangs and they used ciphers to challenge each other and expression themselves, displaying aggression, bravado, and creativity.

Soon house parties could not contain the energy of the music or the dancers and they took it to an all-familiar turf – the street. These guys dared to top-rock, spin and freeze on the concrete, in the alley or in any open space. The public was the audience, the streets were the studios and the stage, and their peers were the critics. Right and wrong became about your performance quality and willingness to boldly express yourself. The dance was right if it felt right and you could execute it with style and finesse and please the crowd. If it was wrong, you would know instantly – the crowd and your peers gave immediate feedback to let you know you needed more practice. Mom and dad did not have to remind the dancers to practice; they took the initiative, driven by their own desire to be the best and earn respect. This kind of self-motivation was a fundamental aspect of hip hop’s development.
The dance was so appealing because of its boldness and style and it’s openness to individual expression. Hip Hop dance is a mirror of sorts. In its conception, it reflected the energy inside a group of people. “It’s a confident, stylized form of movement that expresses a specific culture,” says Juliana Calderon, local dancer, choreographer and Artistic Director of DCypher Dance Company. The dance did not have boundaries because it created itself and had license to go wherever the dancers decided to take it.

On the West Coast, this same need to break out translated into new styles that mixed with funk music, which also have come to fall under the Hip Hop dance umbrella. Here is where we will clarify the matter of pop-locking and the robot. Popping and locking are two different dance forms that originated in California. Don Campbell founded locking, a charismatic funk style using pointing, percussive looks and hand slaps, in clubs in the 1970s. Popping, founded by Boogaloo Sam, is a technique involving contracting and releasing the muscles – it is not the robot. It’s like what happens when someone startles you by accident and you tense up and relax. It is executed with speed and precision.

This synergy of new music and movement on both coasts appealed to the mass public as it appeared in movies such as Wild Style, Beat Street and Breakin’. As DJs and emcees continued revolutionizing the sound of Hip Hop in the clubs and house parties, the form continued its journey, attracting privileged youth who were not breaking out against the norm, “but found something in the dance that they were lacking,” Calderon explains. The media has increased Hip Hop’s appeal. The music, the dance, the dress and the lingo are used to sell almost any product from Gap jeans to iPods. There are Hip Hop classes offered in every large public dance studio. What are these students coming to learn and what are the teachers offering? “Hip Hop is a culture, a way of life,” adds Dennis de Guzman Caindec, an instructor and choreographer from Los Angeles. So, can you teach “a way of life” in a dance class?

As with Calderon and Caindec, I learned the dance from watching family, friends, and music videos. But there is definitely a technique involved with Hip Hop dance, and teaching that involves some history lessons. Under the umbrella of Hip Hop dance, you find b-boying, popping, locking, house, punking, wacking, and the contemporary fusion styles seen in music videos. Each style comes with its own terminology and history of influences. Equipping students with this knowledge, in addition to the movements, teaches them the difference between the styles and helps them execute the movement with more authenticity. Passing on a style’s history also helps preserve part of Hip Hop culture.

In Juli Calderon’s class she teaches a warm-up, follows up with stretching and then teaches choreography (class combination) that varies weekly to reflect different styles. She explains where the movement comes from and why certain movements may have more of an old school, masculine feel or a contemporary, jazzy feel. “The technique is the freedom to release, freedom to express yourself as an individual and break from rigidity.” In order to get students to let go and embrace this freedom, she may have them do breathing exercises to help them relax from their upright stance and translate that to the movement.

Dennis Caindec, a former Artistic Director of Culture Shock in Los Angeles, likes to go beyond what the dance looks like. He also focuses on execution. Though the dance began in the streets, hip hop pioneers invested time in developing movement vocabulary or steps that are the foundation of Hip Hop dance. In Caindec’s class, he carefully explains the steps and terminology, so that even if he fuses different forms together in his choreography, the technique of each style is authentic and the integrity of the movement is preserved. He looks for proper technique in performing companies, like the directors of modern and ballet companies, saying, “if you’re gonna do something, do it right.”

Hip Hop technique is taught like many any other dances, in two main parts: technique and expression. The technique is made up of specific terminology, basic steps, and movement concepts such as control, strength and body orientation. Teachers, myself included, will devote time to explaining where the movement initiates from and use analogies to describe the intent and character behind it. The second part of the technique is in the expression, the letting go, what each person uniquely brings to the movement. Kids in New York and California in the 1970s were breaking out, defining new identities, and carving out space for themselves in society that looked down on them. Their dance was a medium of articulation for their vitality, ingenuity and social concerns.

This is not to say that dance classes have to convert to history lectures. Simply adding a little blurb-factoid-word of the day here and there can suffice. That said, teachers and choreographers should be trained and educated about the history of this dance before passing on what they are calling “Hip Hop.” In this climate of mass commercialization, substance and truth can take the backseat to the glitz and hype. What the original emcees, DJs and dancers started was something positive, constructive, and proud.

These days it seems the music and the dance are headed in a different direction, so much so that the term “Hip Hop” means negativity, exploitation and excess to some. Bitches, guns, money, and the self-serving attitude of “I’m getting mine, so you better get yours” permeate the music, making this message normal and acceptable. Naked women gyrating or acting car models in music videos have become familiar, and even an indication of Hip Hop. These things are not Hip Hop. These images full of affect are being constructed under the Hip Hop label and that does not sit well with me and many of my contemporaries. In its infancy, Hip Hop dance – and the culture at large – had an empowering energy and message. As a teacher and choreographer, I like to play, create characters, and poke fun at stereotypes, but I prefer not to glorify the negativity and façade that have become associated with Hip Hop. Avoiding these things are part of my method in passing on the history and tradition of Hip Hop dance.

Sometimes Hip Hop is not taken seriously as a legitimate dance form because of its improvisational origins and some of the negative images associated with it. But Hip Hop dance is a real life force. There is a right and a wrong just as in any other dance form. There are countless Hip Hop dance companies with members of every race, age and gender, showcasing all the different styles of movement. Clearly these dancers are training and rehearsing just as any other dancer would. They are honing their craft and putting in the hours – most Hip Hop companies in the area rehearse close to midnight on weekdays on top of their 9-5 jobs. Just like Hip Hop’s founders, today’s dancers give whatever it takes to keep their art alive because they are passionate about the dance, and about the possibilities and opportunities it creates for all kinds of people.

Calderon and Caindec agree that anyone can learn the technique – the steps, the history – those things are teachable and learnable. But, since Hip Hop dance is more than just dance, but a lifestyle and an energy, there is a certain “thing” about it that cannot be taught. It is that urge inside of you that tells you to break out, to let go and get down. It is that need to challenge limitations placed on you by others. It is the necessity to express your self. It is the need to write your own story, self-motivated, self-organized, and self-actualized. These are the things that make the dancer. Hip Hop comes from the inside out, whether you do it in the studio, the street, or under the stage lights.

Aysha Upchurch is a Washington, DC based teacher, performer, and choreographer.