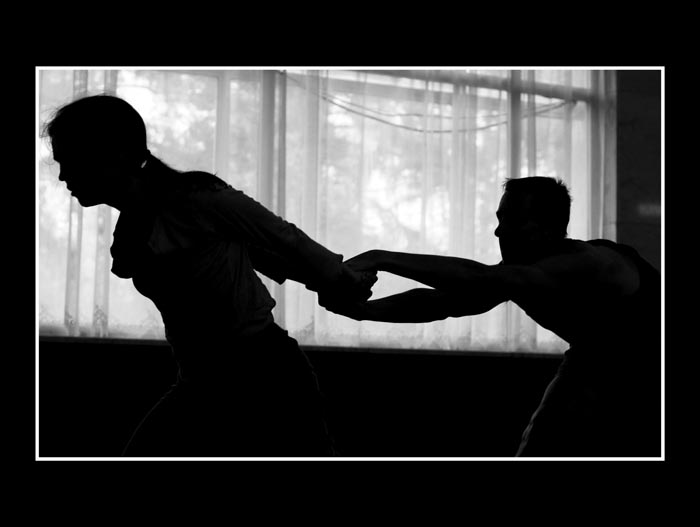 Thresholds Crossed, an evening-length multimedia dance work about Russia and America, premiered in Washington, D.C. at Lisner Auditorium, April 21, 2006.    The project, a kinetic fusion of East and West, explores the events, ideology and humanistic issues that link the U.S. with the former Soviet Union and contemporary Russia.

Thresholds Crossed began in 1997 when I attended a dance conference in Volgograd, the city on the Volga River that rebuffed Hitler’s army.   It was my first visit to the former Soviet Union. Contemporary dance was very new in Russia at that time since it had essentially begun following the dissolution of the Soviet Union, in 1991.  Since 1997 I have visited frequently – teaching, performing and creating work.  Each time I returned to the United States I wrote about my experiences.  This was all done without intention.

For many of us, our awareness of Russia began when we, as children, were taught to hide under our desks in preparation for an nuclear attack.  I always knew a Russian child was hiding under a similar desk fearing the same fate.  Before I started spending time in Russia, the cold war was still be the frame that surrounded my views.  With the passage of time, as doors opened and propaganda diminished for me, a new Russia emerged.

I discovered that Russians and Americans share deeply held values inherent in honor and patriotism, values often won through struggles associated with conflicts and war, both historic and current.   I started to think about what dance piece could be made exploring these issues.  I asked, “What remains of the long history of fear and distrust between Russia and America?  Whom can we trust and who can trust us?   Who will lead, and who must follow?   How do we reconcile our need for privacy and the government’s need for surveillance and security?  What about displacement of values – the value of displacement?  How do we surrender to the will of the majority while protecting the voice of one?  How are propaganda art and political slogans in Russia and America, often couched in humor, used to persuade?   How do we express our loss and move on?  What is the future for world superpowers?

On July 4, 2005 (American Independence Day) an open-call audition was held in Moscow for Thresholds Crossed.   Over forty dancers showed up.   Perhaps it would have been easier to collaborate with one Russian dance company.  Considering the political nature of the work, it seemed important to begin with a democratic process by opening the audition to any Russian able to get to Moscow for the audition.  Dan Joyce, Jennifer Stone, and Megan Thompson, American dancers working with the Dance Construction Company, assisted in selecting the dancers – six Russians and one Ukrainian.  An air of skepticism was present during the audition, and why not?  The dancers selected were expected to rehearse in the capital cities of Russia for one month, five hours a day, six days a week, and then in the USA, similarly, for one month.   Obtaining a visa to America for most Russians is almost impossible, and for young, low-income dancers, a pipe dream.  Each dancer was interviewed by my son, Marc Withers, who lives in Moscow, to ascertain the feasibility of his/her involvement in the project.  The Russian portion of the project was co-hosted by TSEH, a national dance agency in Russia, and the Dance Construction Company.  At the conclusion of the three-week residency, we presented Part I as a work in progress to students and faculty of TSEH International Summer School.  The fall of 2005 in Washington, DC was devoted to the creation of Part III and segments of Part IV with the American dancers who had gone to Russia, and an additional American dancer (Rob Bettmann.)

Five international artists were eventually approved for visas to the United States, sponsored by the Dance Construction Company and hosted by The George Washington University in Washington, DC.  When the foreigners arrived, the material from the residency in Russia, nine months earlier, was reconstructed and the international dancers were integrated into the unison section of Part III.  There was a decided difference in the openness of both the Russians and Americans.  Perhaps this was due to the absence of skepticism about the American residency.  Whatever, the change was palpable. For the last two months of rehearsals, Steve Hilmy (composer, musician), Audrey Chen (musician), and Linda Lewett (videographer), joined in rehearsals.  The addition of the live musicians brought energy to our practice.  In addition, I regularly invited friends to come watch rehearsals.  These additional eyes enhanced the creative energy and focus of our work.

To assist in promoting the dance I looked for partnerships with organizations that work on the issues presented in Thresholds Crossed.  In the end, George Washington University’s prestigious Elliott School for International Affairs’ Institute of European, Russian and Eurasian Studies, sponsored a forum on the topic: “How Young Russian Artists View Their Recent History.”  The Russians were very confident in the presentation, but not comfortable with the idea of making “politically” motivated work. Nikolai Schetnev, assisted by the other dancers, led a contact improvisation session for the Washington, DC contact improv jam, which was hosted by George Washington University at the time.

With only six days to opening night, we began to create Part IV – the grand finale – about contemporary Russia and America, where orbiting groups of USA and Russian dancers collide and intersect. It was satisfying to be working on choreography lighter in content. The international dancers were so disciplined and strong emotionally that the work fell into place quickly with the help of the Americans who had previously refined movements from the choreography. Russian dancers contributed solo materials as statements about contemporary dance in Russia.

In Thresholds Crossed, the visual installation (a video projection across the entire back of the stage) carries the historical perspective while the dance tells the human story.  The music was the bridge between these two worlds. The presence of the Russians and Americans on the stage created a tension and a drama that carried the work.  The audience was fascinated and captivated by the Russian artists, revealing American’s ongoing curiosity about Russians and especially Russian dancers. Thresholds Crossed will be performed during a four-city tour to Moscow, Arkhangelsk, Yekaterinburg, and Krasnoyarsk, Russia, April 17 – May 3, 2007.  The tour is supported, in part, by The Trust for Mutual Understanding, the U.S. Embassy in Russia, TSEH, the Ford Foundation in Russia, The Dance Construction Company and individual donors.

Part I references the period from 1930 to 1990 – from the forced labor camps of the Soviet Era through the Cold War years.  Nikolai Shchetnev collapses and recovers stability in a symbolic statement of bearing the weight of military power while wearing a World War II Russian military coat.  Upstage, Russian and American dancers in groups of two and three, dressed in maroon briefs and white undershirts, begin pushing a lead dancer downstage until the structure collapses. Returning to upstage, the pushing segment repeats with a new resistant leader.  Several duets express physical violence. Betrayal is often a theme. Projected images include historic video footage from Red Square, the inside of gulag prisons, and propaganda art posters.  Original music by Steve Hilmy features electronic music and impassioned Russian war songs supported by the extreme music of vocalist/cellist, Audrey Chen.

For Part II, Maida Withers and Anthony Gongora, dancers, and Audrey Chen, vocals and cello, perform a dramatic trio that examines the tragic events in Abu Ghraib prison. The formal attire of the dress tie and silk handkerchief become a leash, head covering and blindfold. The projected visual installation animates photographs from Abu Ghraib with images of steel sculptures by Frank Williams, a contemporary Russian sculptor.

Part III expresses the human experience of loss and grief. Two men and two women dancers wearing black dresses and suits reveal responses to the loss of faith, the loss of love, and the grief associated with war.  In the finale of Part III, international dancers join the quartet in a unison statement contrasting hope and despair.  The visual installation features video of Arlington Cemetery, the Tomb of the Unknown Soldier, photographs of sculptures at the World War II memorial on Mameyev Hill in Volgograd, Russia, and related imagery.  The music has a complex melodic pattern.

Part IV is a fast-paced, running, finale depicting Russians and Americans in two orbits where dancers intersect and exchange roles.  The feeling is upbeat and driven.  It is a hopeful conclusion.  Referencing contemporary Russian rock and roll, the music supports the race for dominance while having a very good time along the way.  The visual installation features video of contemporary urban life in Moscow and the USA coupled with images of the national flags, currency, and other icons of today.