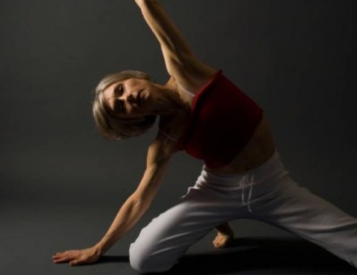 When I started to think about a project for 2007, I rolled around to my typical routes of discovery and development. Sometimes I find an artful contributor –  musicians, composers, poets, visual artists or multi-media – and let that artist’s process inspire my own. This has taken me into some great territory that I never would have reached in any other way.  It has also led to some wonderful people, unexpected results and a unique journey I certainly could never have planned.

After viewing and thinking about art by Robert Rauschenberg, and by other visual artists, I began to consider the collaborative process for choreography. Rauschenberg often cites works by others in his pieces, and I began to think about what that process could be like choreographically.  What would the lonely journey of choreographer be like if I had some company?

Dance is a very public way of making art, at least so says a poet friend who is amazed by that risk-taking. Unlike a writer – who works alone until ‘ready’ for the editor – choreographers most frequently do not choreograph without another body, a human subject, from the get go.  Ideas are being observed and evaluated by your dancers, in front of your own public as it were, even as they are being created.  This very public process of choreography is complexly filled with the demands of personalities, negotiation, emotion, availability, finance and just about every other tricky kink that exists in human interaction.

As a choreographer, you do maintain a position as the lead instigator, suggesting or demanding the fulfillment of your own criteria, spoken or internal.  With a choreography collaboration what would happen to the lead?  Can actual movement materials be shared, swapped, interchanged and in the long run built into something that reflects the artistic position of each contributor?

“In the gap between art and life” is a phrase that Robert Rauschenberg coined for his pieces, also known as ‘combines,’ that merge objects you come across day to day in unexpected relationships.  The unusual relationship I was looking for in “Found” was a choreographer who would be willing to work with the company for a few rehearsals, certainly not composing a whole dance, but willing to evoke movement materials that might be disassembled.  To start, the choreographers would bring an idea or movement inspired by a found object.  An object that could have gone to, or come from the scrap heap would be thought of in a new light, and similarly the dance ideas would be recycled as well.

Margot Greenlee came to us with all her experience plus seven years with the Liz Lerman Dance Exchange.  With Margot we experimented with a core of group improvisations, boiled down to individual inventions from personal dialogues, and then back again to a group dynamic.  Words worked as a catalyst, an underlying element that was never spoken, yet nevertheless resonant.  This way of thinking in words was a quality of negotiation I understood from my daily life, including conversation with self, words that linger after being spoken, and just plain working on the next grant application.

With Laura Schandelmeier and Stephen Clapp the clustering and disbursing of joining up and letting go was an experience of work in tandem.  Stephen and Laura brought in ideas of portals, doorways, rites of passage.  I saw birds flocking and the way time can’t be captured.  We explored moments of completion and stillness, complexities of mechanics in supports and partnering, and tiny compromises in order to reach a group result.

We made a side trip while on the way from performance in North Carolina to work with Danah Bella, of Radford University. Danah explained the cultural differences between her native Southern California and southwestern Virginia, a South very unlike the South in Southern California.  From a roadside landmark not clearly seen, Danah’s found object was something hanging, perhaps broken.  Working in increments, Danah started with a simple but daring amount of weight. Dancers learned the movement in unison trying unexpected impacts, dependently aware of the others though never touching. The idea of a desperate hanging on, a ball and chain tango came up when I reconstituted the movement as a kind of cloying dependence. Using a piece by a young Italian composer played for us by musicians Kristen Benoit and Allan von Schenkel, the tongue in cheek anti-romance of the dance partnerships had to be balanced with making the timing of the music work.

As a seamstress would stitch together, I’m looking for threads of content that I can transition through a very non-linear work.  My own found object is a bird I videotaped last summer.  Enviably free, it couldn’t be caught but was purposeful in the way that each breath is its own breath but connected to the one before and the one after.  As a way to connect myself to the whole, after several years of not dancing in my choreography, I joined in the rehearsals with a true sense of purpose. Being visual, I missed watching the unfolding, but did enjoy experiencing someone else’s process.

Now, as I continue this work, I do think that my visual impulse will take a strong step.  My captive collaborator, my thirteen year old son, creates origami birds that the dancers can fly. I stroll down to look at the creek nearby. I see birds there while I listen to myself think in words.

Jane Franklin is a dance educator and choreographer.  She directs Jane Franklin Dance which is celebrating its 10th Anniversary Season.