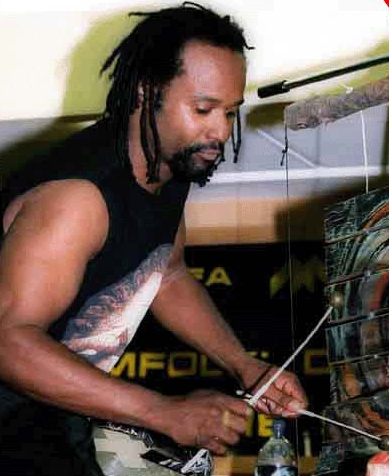 Rob Bettmann– David Pleasant, you were born into a musical tradition that thrives in the Gullah/Geechee culture of Georgia and the South Carolina Sea Islands. In years as an instrumentalist/percussionist you have had the opportunity to work with a number of significant artists, including Wynton Marsalis, Paul Simon, Erykah Badu, Urban Bush Women, Audra McDonald, Graciela Daniel, Ron Brown. You also research and teach as a Fulbright Senior Specialist. I was wondering if you could answer the question what is your favorite experiences as an artist?

DP- Well it would be difficult to pick one. But one of my most extraordinary experiences as an artist, and I carry it with me still, was on Igbo Landing in St. Simon’s Island, Georgia, where I went to do research on Gullah culture. And I went to meditate, but I went to this particular site, which is off Dunbar Creek, and it’s a place where, the place where a great group of Igbo people had jumped off a slave ship, to avoid being made slaves. And it’s the place where the song “Oh Freedom” came from. “Freedom over me. Before I’d be a slave I’d be buried in my grave and go home to my lord and be saved.” And they jumped off the boat rather than be slaves. They jumped off with their chains on. And the myth is that they walked back to Africa in the water, on the water, under the water, but they made it back.

And when I went to this place I had this really interesting, strange experience that’s kind of directed me in this positive direction, and it was so affirming. I came in to the place where this was – it doesn’t have a marker or anything, even though it’s a famous site from 1801 – and it’s so cause they weren’t supposed to bring Africans from Africa to Georgia at that particular time. But they were smuggling them in, and that’s where this particular group of people came from. I went through a gate. And the guy who let me in – it’s where the treatment plant for the city is – he let me through this gate where the site was. And he closed the gate after, and put the latch on it. And it was thundering.

And I stood up on this big rock, and I was meditating and praying and thinking, “what am I supposed to do?” Knowing the stuff I know, and playing the music I play, and having the life experiences I’ve had – growing up on Sapelo Island, and in Darien /McIntosh county – what am I supposed to do? I was praying to god to show me. And at that moment a fish jumped out of the water right in front of me, and when the fish jumped out I thought it was very strange. And then I jumped off the rock, and as I jumped off the rock there was this big clap of lightning that hit. And I was like “wow, what is going on?” It stunned me. And then I heard this creeking sound, this, “eeeehhhr.” And I turned and the gate slowly opened. Behind me. Before that I’d been praying and asking what to do – do I go out and show this message and do this? – or whatever. And I have this experience. The gate opened slow… I’ve never had an experience like that [laughs] of such synchronized action. And that was one that has really had a major effect on my psyche in turns of what I am supposed to be doing as an artist, why I am supposed to be doing it. How relevant it is in terms of my personal spirituality, and spirituality in general. How close for me what I’m doing as an artist is to my God sense, and my ability to carry on and be self-determining. And put forth this art form. And know it comes from someplace much greater, and grander, and transcendent, than any entertainment or quote ‘art industry’ could possibly be. And it is the great message, or parable, of my life.

RB- How many years ago was it?