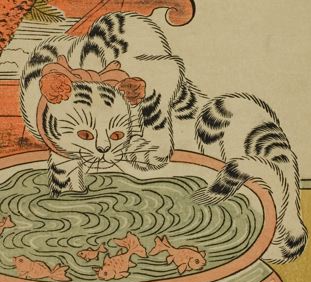 Down here on Earth we live in craziness: plants eat air,
light, water and dirt; animals eat plants; animals eat animals;
plants eat animals; people eat people, plants, animals,
and the inanimate Earth herself; ravenous insects eat us all
as we eat them. So, we welcome a rainy day like today.

Rain fills our hearts with wishes for healthier days, the lives
we’d like to live like a child counting cows in Mr. Bean’s field
as she looks out the window in class instead of paying attention.
Down here on Earth,

I myself, as it rains today, daydream back to my old pal Sam
and his dog, Roscoe, a prince without papers. How they loved
each other, how Roscoe was Sam’s special pal, and vice versa.
Where are they today? I never had a dog, but me and Roscoe,
we got on well. Sam and I would pick off his ticks, and pet him
down here, on Earth.

One summer day, Wendell, Sam and I sat on Sam’s back porch
in a fog of boredom, when Roscoe, Sam’s mutt, brought him
a baby rabbit. “Roscoe!” Wendell, shouted as if horrified,
“What have you got in your mouth?” Roscoe merely—gingerly—
held the baby rabbit in his teeth, then presented it to Sam.

Sam took it from Roscoe’s jaws, the jaws of life, and held it up
to his face. Wendell poked his head in to investigate as well,
as with one silent finger Sam stroked the rabbit between its ears.
One summer day,

like any other summer day lost in the middle of endless July,
Sam, Wendell and I thoughtfully examined a small handful
of palpitating fur, its rabbit ears and nose, its rabbit mouth,
a face staring back with brown rabbit eyes, a face amazed
as us, as Roscoe panted in the building heat, examining Sam—
one summer day.

Me and My Cat

I pull the front door of our house open, pulling
the storm door shut with its breath.
Straightaway, as if he’s not an apparition in my mind,
my old cat sits on silent haunches at my feet.

His name was, accidentally, Angelica. Was there ever
such a being in my life as an orange
and white tabby cat? I vacantly wonder. Absolutely.
The tabby M on his forehead. M
for my cat. M for mistook at birth to be female
a few days before Christmas—thus, Angelica.

So, we called him Angelica. He sits and stares, now,
at the front yard, the busy street beyond,
while his small breaths, as if a saloon door
swings in his throat, puff in
and out, in and out, to slightly fog the great glass pane
of the storm door.
House. Door. Open. Shut.

Year in year out. Day after day. Ad infinitum.
For a limited time only.
I ask Angelica, “Angelica, would you rather
have a brief electrifying life
dodging tires and bringing home murdered birds
for me to bury in the backyard?
Or would you rather stay inside today, live forever,
while I bring you six-packs
of ‘Adult Urinary Hairball Control Cat Food?’ ”
“Arf!” cries Angelica. And we both chortle,
“House, door, open, shut.”

Patric Pepper has published two poetry chapbooks, Zoned Industrial, and Everything Pure as Nothing. His full-length book, Temporary Apprehensions, was a winner of the Washington Writers’ Publishing House (WWPH) Poetry Prize. His work has appeared most recently in Barrelhouse (book review), Feral, Gargoyle, The Northern Virginia Review, and This Is What America Looks Like, the 2021 WWPH anthology. A DMV native, he splits his time between Washington, D.C. and North Truro, Massachusetts.