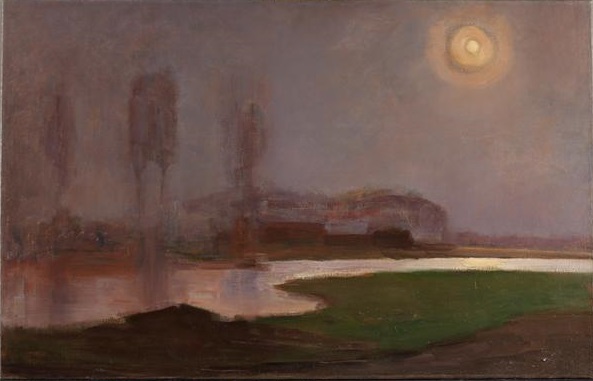 Ex-husbands, like other catastrophes, come in threes.
One dead, one fled to New York, and one out of touch.
The lost and found blues can be sung in any key.

Sometimes the one who is left is the one who leaves
first, after years holding close the same grudge.
Ex-husbands—leavers or left—come in threes.

If shoe hits glass or glass hits shoe to seal
the chuppah vows, it’s always the glass that gets crushed.
The lost and found blues can be sung. In any key,

“Erev Shel Shoshanim” will not guarantee
eternal evenings of roses and coos of doves.
Ex-husbands, like celebrity deaths, come in threes—

even marriages outside the fold. Years
later, a new wedding band, and with luck
the lost and found blues won’t be sung in my key

and no one will add to the wake of decrees,
voided ketubahs and deeds covered in dust.
The lost and found blues can be sung in a brighter key.
Ex-husbands (Count them!) come in threes.

Like Ethiopian wolves,
I turn nocturnal with need
to translate the dark, silences
filled with loving voice mails
left by the recent dead
who promise to call me back.

Had I the good sense to pattern
my days by the chariot of the sun,
I’d write paeans at dawn, but
I prefer to make my hay by moonlight
while you sleep, sweet dreamer,
the closest I’ve come
to a sound choice in mates.

And like Rachmaninoff’s Vocalise,
sung with its one orphaned vowel,
I’m in a C-sharp minor mood tonight,
restless for barred owl shrieks
through the cracked-open window
of late fall—something to dissipate
fears that gather like flies to a wound,
not the least of which are reports
that my night owl ways
may syncopate my body’s
circadian rhythms, may even
abridge my life.

My internal clock measures two minds:
one steady as a metronome,
rocking in time to my mother’s
calibrated tones; the other
like a mare racing to the warmth
of the barn for the night
beats a path back to bed.

Nancy Naomi Carlson, winner of the 2022 Oxford-Weidenfeld Translation Prize and twice an NEA translation fellow, has published twelve titles. An Infusion of Violets (Seagull Books, 2019) was called “new & noteworthy” by The New York Times, and Piano in the Dark (Seagull Books) is forthcoming next spring. Her poems, translations, and essays have appeared in APR, The Georgia Review, Los Angeles Review, Paris Review, The Academy of American Poets’ Poem-a-Day, and Poetry, and she’s the Translations Editor at On the Seawall.